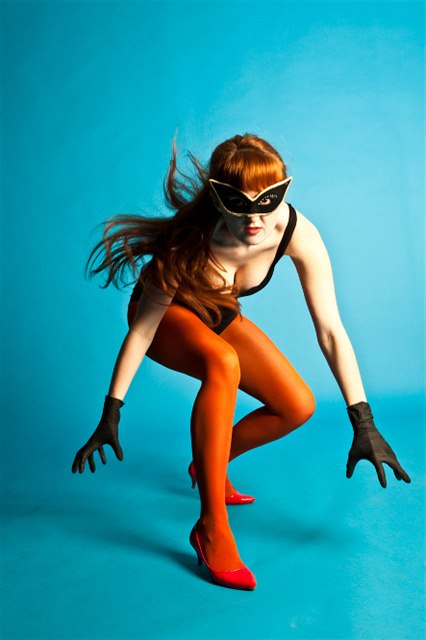 Accompanying the recent Famufest 2011 student film festival are a number of photography exhibitions that show the breadth of work being done by current students and recent graduates of Prague’s Film and TV School of the Academy of Performing Arts’ (FAMU) photography studios. The exhibitions are a mix of work of Czech and international students, which adds to an already diverse range of styles and sensibilities.

Weightlessness (Beztíže) is an exhibition of FAMU photography students at Prague’s GAMU gallery (Galerie Akademie múzických umění v Praze). While it is not always easy to relate the theme of the title to the extremely varied photos on display, the exhibition provides three rooms full of pictures that push the boundaries of standard photography — from near abstraction to out-of-the-ordinary views of nature, to images of an almost classical beauty, to a portrait of a costumed super hero.

There are a number of images that press the viewer to look beyond their initial visual impressions, such as Nina Agerholm Schacht’s “Pushing Intimacy,” in which a woman is seen from the back in a pale black and white next to the color image of a lake whose waters appears to have the cloudy, opaque whiteness of milk. An untitled headless portrait of a shirtless man with a bird perched on his hand, by Kateřina Zahradníčková, is another of these images that begs further questions, as are a pair of framed polaroids by Michal Adamovský, whose work was exhibited in Prague Photo earlier in 2011.

Nikolai Ivanov’s untitled black and white nude reveals little by having the figure’s face and upper body obscured by pixilation and having scratches on the surrounding picture surface. Adéla Leinweberová’s picture of a female super hero can be looked at through special viewing glasses with headphones playing Tina Turner “We Don’t Need Another Hero.” Two of the most striking photographs in the show, The Lost Time and Earth, are by photographers Yuan Hanhan of China and Chiawen Lin of Taiwan.

Linda Páleníková’s solo show in Galerie K4 also has a connection with weight, though from the opposite end of the spectrum from weightlessness. “I – You” (“Já – Ty”) is a quirky, multicolored look at weight loss and its opposite in the form of scrumptious-looking cakes and cupcakes. Páleníková is a recent FAMU graduate.

The combination of the wires and plugs of weight measurement/reduction equipment and the bright colors of the cupcake icing and backgrounds used, in addition to the use of a disturbing rubber mask,  give the series a surreal, science-fiction touch.

I Doubt We’ll Meet Again is an exhibition taking place at the café Krásný Ztráty in Prague 1. Curated by Alžběta Diringerová, it comprises the work of a highly international group of photographers, among which Diringerová is the only Czech. The work arose from a workshop that took place in Marseille with the internationally renowned Magnum photographer Antoine D’Agata.

In a short article on his work in Helsinki-based art magazine Hesa inprint Finnish photographer Ossi Piispanen described his work in the project as “a project which mixes the real, the absurd and the emotional.” As the exhibition’s title indicates Piispanen writes that he photographed people he had never met (and likely would never meet again). Gaining access to the subjects’ private space proved a challenge not only to his social skills but to his creative capacities as well, and the overall results are some highly distinct and eccentric portraits and accompanying photographs.

From the abstract to the conceptual

In the very midst of the throngs of tourists parading through Malá Strana, it is possible to step through a doorway into a quiet haven of Prague’s photographic past. The restored garden studio used by the most famous Czech photographer, Josef Sudek, is a gallery today and is currently the site of a solo show of FAMU student Marcel Stecker, who also is exhibiting in the show associated with Famufest.

The meditative quality of the exhibition perfectly fits the studio’s atmosphere. Stecker uses the ordinary material of everyday, household objects — foam padding, tissue paper, a cardboard container — and through the use of light and a straight-on presentation creates powerful iconic images. It is a realm of abstraction far more typical of painting and carried out extremely effectively.

At Galerie Velyrba, associated with the well-known Prague café and restaurant, there is a show that at first glance seems to have nothing to do with photography whatsoever. “Who is Sylvie?” by FAMU student Silvie Kořenková and curated by Adéla Leinweberová contains a series of cryptic texts on the wall. For an English-speaking audience, the small show seems all the more inaccessible with the texts being in Czech.

Yet a small booklet not only provides an English-language explanation of the show and texts but photographs of the texts in their original settings. While studying in London, Kořenková fell ill and upon recovering found herself unable to go outside out of fear. She began corresponding with a Czech psychologist by e-mail and the texts seen in Velyrba are fragments of what she wrote.

The photographs of posters saying things like “I am frozen by fear and cannot move on” placed on some of the city’s graffiti-covered walls or on the ground at a crosswalk as Londoners pass by without noticing or understanding offers a compelling image of the private projected into a public space as well as a glimpse of the horrifying anonymity of big cities.

To Dec. 4
Galerie Velryba
Who Is Silvie?
Silvie Kořenková
To January 6
Galerie K4
Já – Ty / I – You
Linda Páleníková
To Dec. 23
Café and Gallery Krásný Ztráty