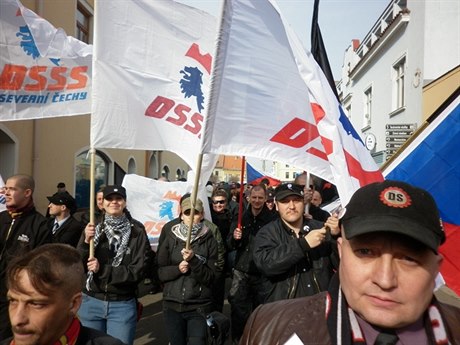 Memebers of the Workers Party for Social Justice (DSSS) and its youth branch (DS) on the march foto: munimedia.cz, Česká pozice 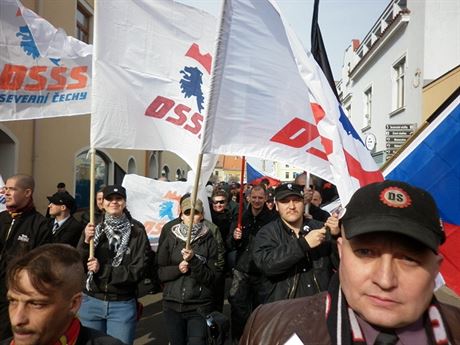 Petro Zhivachivsky, 15, remaims in serious condition following an attack allegedly at the hands of three Romany boys on Sunday, April 15, in Břeclav, southeast Moravia. Friends are organizing a demonstration to protest against the attack and racial violence, but the youth wing of the neo-Nazi National Workers Party for Social Justice (DSSS) apparently attempted to “hijack” the protest for its own propaganda purposes.

Doctors had to remove one of Zhivachivsky’s kidneys following the attack, and his liver is also reportedly damaged. After friends said they intended to hold a demonstration against the attack and against violence in general, the youth wing of the extreme-right wing DSSS announced on its website that it was taking the initiative and organizing the protest.

Zhivachivsky’s friends, however, say the program of the march and protest scheduled for Sunday (April 22) remains under their control: “We acted upon the Workers’ Youth comment about the planned march in which they said they wanted to make its realization easier and therefore they registered as organizers. Because of this, we negotiated with them, and we agreed that they’d provide technical aspects and we’d take care of the rest of the organization, including the speeches,” Radomír Hrabovský, one of the initiators of the demonstration told the daily Právo on Friday.

‘I wouldn’t want for some unrest or fights to breakout. I definitely don’t want that in Břeclav’“Basically, we want a return to the initial idea of a peaceful march in support of injured Petro. We will be decent and the Workers’ youth also promised us that it will be peaceful,” Hrabovský added.

Zhivachivsky says he also wishes for a peaceful protest. “I hope that the march will not be spoiled somehow. I wouldn’t want for some unrest or fights to breakout. I definitely don’t want that in Břeclav,” he was cited by Právo as saying.

Hrabovský and his fellow organizers intend to hold a collection for Zhivachivsky and local Romany have also been asked to contribute. “I would accept [their] money. Not every Roma is bad,” Zhivachivsky said. The famous Czech pop singer Michal David has pledged to dedicate the proceeds from a planned concert in Břeclav to Petro Zhivachivsky.

Zhivachivsky was walking alone at the time of the attack and says he was set upon by his assailants after they had stopped him by asking for a cigarette, which as a non-smoker he didn’t have.

Over the past week 20 extra policemen have been drafted into Břeclav to boost patrols in the town with a population of around 25,000, and prevent any racially motivated clashes. No such incidents have been reported since the attack on Zhivachivsky.

The local administration after some consideration has decided to allow the march and demonstration to go ahead. “We don’t want for Břeclav to become another Šluknov,” South Moravia regional governor Michal Hašek (Social Democrats, ČSSD) said, referring to the town in the far north of Bohemia where last fall a machete attack by Romany on a local bar sparked reprise attacks against local Romany and a series of demonstrations organized by far-right wing groups.

“I’m convinced that in South Moravia law and order applies to everyone, irrespective of political persuasion, skin color or social status,” Hašek added.

According to the police, the prime suspects are believed to have fled the Czech Republic and returned to the Spišská Nová Ves district in central Slovakia from where a sizable portion of the Romany population in Břeclav have emigrated.