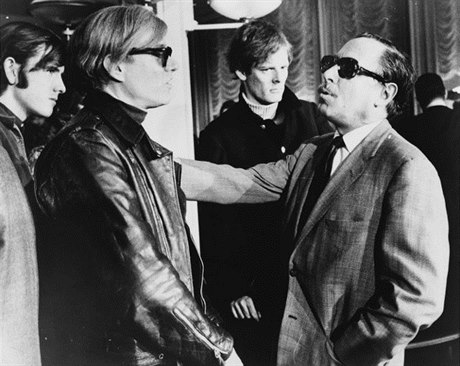 Andy Warhol, seen here with playwright Tennessee Williams in 1967, was ‘ashamed’ of his roots, says Factory collaborator Paul Morrissey (background), but curators of a new exhibit say the artist was proudly ‘Czechoslovak,’ though his heritage was Rusyn foto: US Library of Congress Prints, Česká pozice 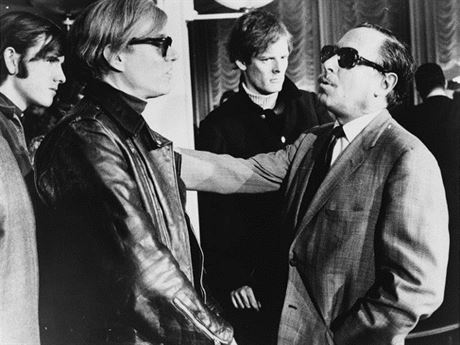 It’s a Czechoslovakian custom my mother passed on to me;
The way to make friends, Andy, is invite them up for tea.

— So sang Lou Reed on the track Open House from “Songs for Drella,” the 1990 LP that he and John Cale released in tribute to the US artist and pop culture icon Andy Warhol, who decades earlier had backed the Velvet Underground (and who designed the famous banana cover for the experimental rock band's debut album).

But were Warhol’s ancestors in fact Czechoslovakian? Or even Slovak? The first-generation American artist’s ties to the lands of his forebears are the focus of a new exhibition at the Prague gallery Dvorak Sec Contemporary, simply titled “Andy Warhol and Czechoslovakia,” which sheds new light on his heritage and feelings about his origins.

“It’s an attempt to map Warhol’s relationship to Czechoslovakia, as the original homeland of his parents,” Michal Cihlář, the show’s co-curator, told Czech Position at the opening. Much of the memorabilia and photos were collected by Cihlář (himself a well-known Czech artist) and his colleague Rudo Prekop (a Slovak photographer), who founded the Andy Warhol Museum of Modern Art in the small eastern Slovakian town of Medzilaborce.

Among the items on display in Prague are two dozen works borrowed from the permanent collection at Medzilaborce — the world’s first museum dedicated to Warhol, set up in 1991 with the help of the artist’s brother John Warhola (who, unlike Andy, kept the original spelling of the family name).

A portrait by Warhol of his aging mother, Julia (whose maiden name was Zavacká), done in his classic silk screen style (think Mao or Marylin prints), is a real highlight of the exhibition; it is also among the least familiar images on display, despite their close relationship well into his adulthood.

The Ruthenians (also sometimes called Rusyns) are an ethnic minority with a complex history who come from the East Carpathian Mountain region. Some one million people claiming this heritage are today scattered through Slovakia, Ukraine, Yugoslavia, Romania and Poland.

The birthplace of Warhol’s parents, the village of Miková, was still part of the Austro-Hungarian Empire when his father Andrij Warhola, like many Ruthenians, emigrated to the US in 1914, shortly before the outbreak of the First World War. The state of Czechoslovakia — created after the dissolution of the Austro-Hungarian empire — has been in existence for only three years when Julia followed Andrij to America in 1921.

So while Julia was technically “from” Czechoslovakia, Andrij arguably was not; it’s easy to see why some regard attempts to link Warhol to Czechoslovakia as spurious. The Encyclopedia of Rusyn History and Culture notes that Warhol “himself never contributed anything to Rusyn culture, although some writers have attributed the choice of themes and motifs in his paintings to his Carpatho-Rusyn background” but his fame as an international artist has been exploited by activists in Europe looking to raise awareness about the minority as a distinct people.

“His mother was in constant contact with people from her homeland, including, of course, her sister Eva,” Kršňák said. “She sent works that Andy had done to [what is today] Slovakia, and he even released a record of his mother singing old Ruthenian folk songs. The links don’t necessarily have to be reflected in his work, but they were definitely reflected in his life.”

As a widow, Julia moved to New York City in 1951 to take care of her son, who often used her decorative handwriting to accompany his illustrations. In 1966, he made a movie called “Mrs. Warhol” that features Julia in her basement apartment in Andy’s house playing “an aging peroxide movie star with a lot of husbands.” She died in 1972, a year after returning to Pittsburgh.

The man from ‘nowhere’

Andy Warhol looks a scream, hang him on my wall.
Andy Warhol, Silver Screen, can’t tell them apart at all.

Born in the industrial city of Pittsburgh, Warhol — who could be as cryptic as his iconic art — liked to say he came from “nowhere.” His long-time business manager Paul Morrissey, who joined the legendary Factory in New York in 1965 and went on to direct “Chelsea Girls” and many other works that came to be known as “Warhol’s movies,” told this writer during a visit to Prague some years ago, that his late collaborator had never discussed his “Czechoslovak” background with him.

“He was ashamed of it. He was not Czechoslovak; he was Ruthenian,” said the evidently embittered Morrissey. “The idea that he was sophisticated ... is the idea of a peasant being sophisticated, keeping his common sense. He was not a New York sophisticate.”

Warhol’s best quality was his sense of humor, according to Morrissey. “He was basically a peasant — he had a kind of common-sense sense of humor that came directly from his simple roots in his family’s background in a village in the mountains in Ruthenia.”

However, Michal Cihlář, the Medzilaborce museum co-founder, insisted that Warhol had, in fact, defined himself as Czechoslovak for most of his life.

“At home, he spoke Ruthenian with his mother. It’s a language that’s a little similar to Czech, or more like Slovak. He considered himself to be Czechoslovak,” Cihlář said. “But about a year before he died, he spoke to a Czech woman in a pub — and she didn’t understand him. He was horrified, because it turned out he wasn’t really ‘Czechoslovak’ after all. He had been speaking to her in Ruthenian, which she couldn’t understand.”

One objective of the current exhibit at the Prague Dvorak Sec Contemporary gallery is to draw attention to an extensive book that Cihlář and Prekop have been working on since even before the fall of Communism.

“When we were trying to break the resistance people had to a Warhol museum, we gathered a lot of material; articles and loads of interesting photos turned up in Medzilaborce, where Andy’s parents had lived,” said Cihlář. About a year before Warhol died, he spoke to a Czech woman in a pub — and she didn’t understand him. He was horrified.

“It was as if this stuff was looking for us, and we started to archive it. And once you have a few banana boxes of material, you have to kind of take it on, decide what to do with it,” he said. “That’s how the idea of the book arose, though we would never have imagined at the beginning that we’d be working on it for 22 years.”

Perhaps more interesting than the exhibition’s original artworks are the items related to the Warhola (spelt Varchola on some headstones seen in photographs on display) and Zavacký families, including airmail envelopes from correspondence between Julia, with an address on Manhattan’s Lexington Avenue, and her sister, care of the local village post office.

Exhibition organizer Kršňák said a number of photos taken at what was a strictly private funeral for Warhol had never been displayed before; also eye-catching are condolence cards whose icons reflect the family’s Ruthenian Rite Catholic heritage; said to have been homosexual yet celibate, the artist himself was a practicing member of the church.

Cihlář and Prekop’s book, like the exhibition, titled “Andy Warhol and Czechoslovakia,” will feature interviews with Czechs and Slovaks who knew him, such as film director Miloš Forman and art collector Meda Mládek, members of the artist’s extended family in the United States, and key members of his Factory scene.

The book will be launched in August at celebrations to mark the 20th anniversary of the opening of east Slovakia’s Andy Warhol Museum of Modern Art. Co-author Prekop told Czech Position that a train-load of revelers had traveled from Prague to Medzilaborce to try to drum up support for the proposed museum in 1990, and he hoped a similar party on rails would be organized this summer.