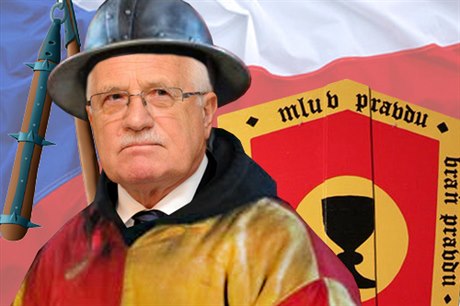 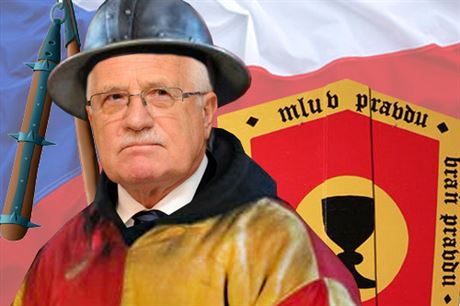 The quarrel that recently raged between President Václav Klaus and Foreign Minister Karel Schwarzenberg (TOP 09), does not just concern whether or not the Czech Republic joins the Treaty on Fiscal Responsibility. Writing in the daily Právo, political analyst Jiří Pehe (January 16, 2012) even goes as far as to state that it is not primarily about a “European” dispute, but the future course of Czech democracy.

Pehe, traditionally critical of Klaus, believes the president wants to take advantage of a dispute concerning European integration for the “nationalization” of Czech politics that would, according to the Klaus, function as a “wagon wall behind which Czech politics could find protection from the onslaught of globalization by exalting national traditions and interests and an artificially constructed identity.”

We add that, if that is truly his intention, then in terms of modern Czech history it is not too original of Václav Klaus. The Staročeská strana (Czech Nationalists) built a “wagon wall” 150 years ago, and it was built after Munich not just by the National Unification movement, but, under the slogan “Small, but ours!” it was also used by the Communists. And it was, of course, this building of “wagon walls,” while the world went the other way, by which the Czech Nationalists historically discredited themselves, just as did the provincially conservative ideologues of the Second Republic which followed the Munich Agreement.

Some competent person should elucidate these analogies to Prime Minister Petr Nečas’ Civic Democrats (ODS) before he also gets left behind due to his a priori soured and untrusting relationship to the European Union which is still fed by his loyalty to Klaus, the party's founder. There is probably little point in explaining this to the conjuncturalist Public Affairs (VV) if they have no more than three percent of the electoral preferences and are keeping their heads above water only thanks to the lifelines thrown to them from Prague Castle, the seat of the Czech presidency.

No referendum around the corner

But let’s go back to Karel Schwarzenberg, the TOP 09 chairman. It was no surprise when it was announced in the daily Lidové noviny that ministers from his party might leave the government if the Czech Republic didn’t sign the Treaty on European Fiscal Responsibility. Although he subsequently corrected that statement to say that under such circumstances it would be difficult to remain in the coalition government, in essence it hasn’t changed his communiqué. It confirms what the first Deputy Chairman of TOP 09, Finance Minister Miroslav Kalousek, accepted as the program thesis at the party’s recent republic-wide assembly: TOP 09 is a pro-European, right-wing party that does not reject the process of further EU integration.

Since the last TOP 09 assembly, it is quite obvious that on the topic of “the EU and us” Schwarzenberg’s party wants to significantly crystallize opinions on the right with regard to the ODS, which remains a eurosceptic party, as confirmed at its congress two months ago.

Certainly Kalousek’s resounding “no!” to last Wednesday’s Government Resolution, at which Ministers for ODS and VV pushed for a referendum on the Czech Republic acceding to the agreement on fiscal responsibility, organically ties in with Schwarzenberg’s skirmish with Klaus. In the current climate, with three-fifths of citizens mistrusting the Eurozone and the EU, a referendum would kill the treaty.

Nevertheless, it will not come to a referendum, simply because without the votes of the TOP 09 senators and MPs, the government coalition (ODS-TOP 09-VV) and even the similarly europhobic communists will not command a [three-fifths] constitutional majority in the lower or upper houses. And that is what is needed to approve a special law on such a referendum. In general, the main opposition center-left Social Democrats (ČSSD) support a referendum, but because it is also a party with a very positive relation to the EU and its further integration, in this respect, it is on the same side as TOP 09.

It is the euro-optimistic link between TOP 09 and the ČSSD which, for several months, has been leading some commentators to wonder whether if TOP 09 brought down the government, it would then team up with the Social Democrats and call for early elections. In this case, Václav Klaus would still be president and he couldn’t use his authority to promote “nationalist parties” let alone lead one to try to ensure it gained enough votes in both parliament and in any future government so that it could push for the Czech Republic to leave the EU.

By the way, in Riyadh, recently, Klaus stated that, for the Czech Republic, the benefits of the EU were minimal, if not negative, which considerably compromised Nečas’ government, whose official opinion is different, despite the reluctance of the ODS. Early elections to the lower house of Parliament (Chamber of Deputies) would, however, have to take place by March 7, 2013; until then Klaus is restricted by his presidential mandate from getting overtly involved. Afterwards, he will have his hands free to shuffle his “patriotic” cards. Similar considerations on an early election are not lacking a certain logic, but they are not realistic. Why?

Of course TOP 09 could topple Nečas’ government, but not much else. Just teamed up with the Social Democrats  there would be no majority in the lower house  for a resolution, on the basis of which, according to the year before last's amendment to the constitution, the president could dissolve the lower house and announce early elections.

They can also vote with their feet, but, in this case, probably none of the legislators elected for ODS and VV would be missing, thus not lowering the quorum. True, the Social Democrats and TOP 09 could be helped by the Communists, but Schwarzenberg’s party would probably not stand for that  and the help would come at too high a price.  In addition, the Communists are counting on the economic crisis of contemporary capitalism getting ever deeper. They would rather wait for its climax and thus look to elections due in the Spring of 2014.

But let’s say that they do somehow “barter” an agreement in parliament and there are early elections. It’s highly likely that the left would win; so, if the Social Democrats fail to combine with the Communists (KSČM), they would have to rule in a coalition with the right. The election’s outcome would determine whether it would be with TOP 09, with the ODS. or both these parties at the same time.

It would have to be a very pragmatic coalition that would require all participants to back off from their parties’ economic-social ideological fetishes.  So that their voters don’t uleash a backlash on the parties for that, the country would have to be in such a deep crisis that there would be no recourse other than a pragmatic “Government of National Salvation.” Otherwise, neither the left nor right would rush to join such a government, which is also true of any transitional government between TOP 09 and the Social Democrats, if TOP 09 does indeed manage to shoot down Nečas’ Cabinet. There is another reason early elections are a chimera. In particular, the ČSSD and ODS don’t want them because they simply cannot afford them.

In addition, next year the Social Democrats are expected to change their leadership and pragmatists in the party argue that it won’t be Bohuslav Sobotka, nor Michal Hašek, and not even Jiří Dienstbier, Jr., the most popular Czech politician at the moment, but probably one of the successful Social Democratic mayors or governors that will take the helm. So what does TOP 09 say? It is not possible to make a pragmatic policy with Sobotka, the current ČSSD chairman.

But there is another reason early elections are a chimera. In particular, the ČSSD and ODS don’t want them because they simply cannot afford them. An almost year-long campaign before the parliamentary election in May 2010 landed ČSSD with a Kč 300 million debt and ODS also went into debt, albeit for slightly less.

If they will have to spend more millions this autumn on the campaigns for the next elections to the regional councils and one-third of the Senate, and, God forbid, next year on the direct election of the president, then they will not have little left for parliamentary elections. The “big” elections will be very expensive, even if a ceiling is placed on campaign spending by law. After all, who knows whether, with regard to the huge party debts, the senators won't contrive something with the direct election of the president.

— Petr Nováček is a commentator for Czech Radio 1 – Radio journal.