Czech Ministry of Industry’s vision of economic diplomacy boosting exports comes up against stiff resistance; a turf war is looming 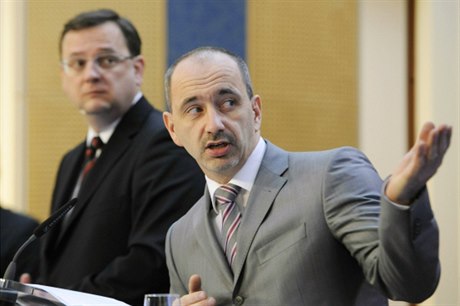 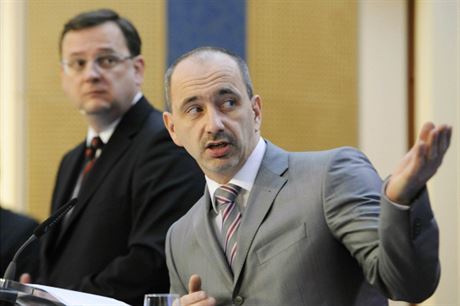 Czech Minister of Industry and Trade Martin Kuba (Civic Democrat, ODS), flanked by ODS Prime Minister Petr Nečas, recently proudly unveiled his vision of how economic diplomacy could boost the country’s export performance and broaden sales — so as to be less dependent on the European market. Key targets were 12 priority countries with exports sales to be helped by around 70 of the ministry’s trade missions.

But that ambition was not cleared beforehand with Foreign Minister Karel Schwarzenberg (TOP 09) and it has become clear that the Foreign Ministry holds diametrically opposed views to those being advanced by Kuba in this regard.

The depth of those differences are revealed in the Foreign Ministry’s observations during inter-ministerial talks about the Czech Republic’s export strategy from 2012-2020 — with the country running the risk that no clear lines on an export promotions policy will be in place two years after the last export strategy (2006-2010) came to an end.

Diplomatic circles have been dismissive of Kuba’s latest draft proposals, unveiled at the start of February, with some claiming he is trying to set up a sort of tour agency for his friends — at public expense — with Czech embassies expected to be the hosts. Kuba sees the issue in an entirely different light. “We have come up with a model for strengthening economic diplomacy, and we are offering help from people with business  knowledge. This is something that every foreign minister should applaud. We do not at all expect this to be the cause of any conflict between us.”

‘We have come up with a model for strengthening economic diplomacy, and we are offering help from people with business  knowledge. ... This is something every foreign minister should applaud.’

But those comments are unlikely to smooth over the Foreign Ministry’s long list of problems with the industry minister’s plans. Czech Position has listed the most significant of them.

The Foreign Ministry has called for the list of priority countries be drawn up after discussions between the two ministries, with the list updated every three years. The list mentioned by Kuba and Nečas at their press conference — Brazil, China, India, Iraq, Kazakhstan, Mexico, Russia, Serbia, Turkey, Ukraine, the US, and Vietnam — did not make it in the final strategy document following arguments during ministerial consultations.

The Foreign Ministry argues that it is necessary that some basic complementary services are offered by it without a doubling and overlap in the services being provided.

It adds that many phases in the export strategy, such as “action plan for export and internationalization” are simply not defined adequately, nor is the way of fulfilling them spelled out. This is important, it argues, because without that sort of clarity there can be no sort of evaluations how to achieve the goals. Or to evaluate whether they are being met at all.

Czech diplomats also accuse the industry ministry of glossing over the services currently offered by the Foreign Ministry to Czech exporters and painting a picture that does not correspond with reality. It says, for example, that it already organizes a network of commercial help out of more than 100 offices, is a shareholder in the Czech Export Bank (ČEB) and Export Guarantee and Insurance company (EGAP), supports participation of Czech firms at foreign fairs and exhibitions and is the joint organizer of Czech technological days.

The main lobby group for Czech industry, the Association of Industry and Transport (SPD), which cooperated with the Chamber of Commerce in drawing up its response to the strategy, also makes two basic observations about it. It underlines the need for the two ministries to cooperate and avoid needless battles about who does what. “We also expect government representatives, members of parliament, and senators to target their foreign trips mainly to priority export destinations and include businessmen in their delegations,” SPD chairman Jaroslav Hanák told Czech Position.

It is not the first time the two ministries have clashed. Czech Position outlined at the end of 2010 how Foreign Minister Karel Schwarzenberg and Kuba’s predecessor Martin Kocourek (ODS) got into a fight over the latter’s bid to dispatch his own officials around the world to boost Czech exports.  Then, the Foreign Ministry did not give way on the demand that it consult over the selection of diplomats who would be in charge of trade and economic sections at foreign embassies. It also refused the offer from the Industry and Trade Ministry of around Kč100 million to help finance these sections.

‘It’s not clear who will select the commercial attachés, what their subordination to the head of diplomatic missions will be, or even if they will have to be screened by the National Security Authority (NBÚ).’

The battle has now broken out again in spite of minister Kuba’s insistence that he is not seeking anything fundamental from the foreign ministry. “We are saying to the Foreign Ministry that we will give you economically qualified people from business and we will ensure that they are paid,” he told Czech Position following his presentation.

Meanwhile, the issue of whether these economic diplomats should actually have diplomatic status is unclear. “That is a question to be discussed. They should be part of a team led by a diplomat, the same, for example, as the current situation of a military attaché,” Kuba said. Earlier, on Feb. 27, he was more direct. “We first of all need an office in the embassy and then we will discuss what status we want to give these commercial attachés,”  Kuba told the news server Aktualne.cz.

But this approach is likely to meet with some problems. Trustworthy sources have told Czech Position that while international law respects the activities of military attachés at embassies, no such allowances are made for so-called economic or commercial attachés.

Kuba’s vision also looks like being fairly expensive for the country. “If a network of economic attachés is developed having  diplomatic passports and are dispatched by the Ministry of Industry, it will have to cover the accommodation, travel costs, family expenses including education of children, cars, equipping apartments etc,” an official who asked not to be named told Czech Position.

Other issues also needed to be resolved, he warned. “It’s not clear who will select the commercial attachés, what their subordination to the head of diplomatic missions will be, or even if they will have to be screened by the National Security Authority (NBÚ),” he added. It is precisely these sort of questions that are creating nervousness in the foreign ministry.

If the idea of a network of Czech commercial missions does get off the ground it will have a clear impact on two state institutions, the export boosting CzechTrade and foreign investment enticing CzechInvest. The former already has 33 foreign offices and the latter seven. The industry ministry, which is responsible for both bodies, has long talked of the need to merge the foreign outposts of both bodies.

Czech Position has learnt that the ministry is already preparing to bring the foreign staff of both institutions directly under its control — if the export strategy is not approved by the government. This would strengthen the influence of the ministry’s foreign trade section headed by deputy minister Milan Hovorka: he would have the last say in who will be sent abroad in the future.

The first step in merging CzechTrade and CzechInvest’s foreign offices have already taken place. Sources say that CzechTrade general director Ivan Jukl has already been summoned to bring in a list of the persons and their postings to the ministry so that they can come under its control. That process should be completed by the end of March.

Some businessmen have opposed the merger of the two agencies. “To integrate two bodies which have nothing in common will not have any effect,” said the head of the Czech Association of Small and Medium-Size Businesses (AMSP), Karel Havlíček. “Export policy should clearly define who is responsible for the administration, who for supervision, and how competences and responsibilities of the individual institutions should be shared out. That is missing from the document now,” the AMSP said in its comments about the export strategy. It also bemoaned the failure to consult with the foreign ministry and the list of priority countries.