‘Dům’: Houses divided against themselves 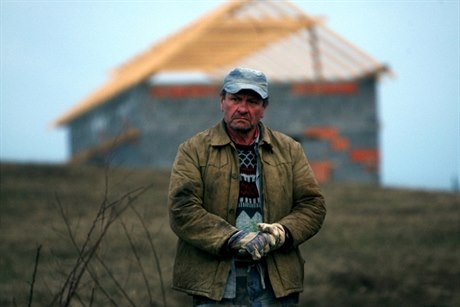 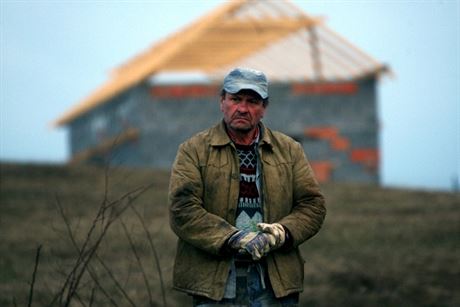 During the communist era, some dreams got delayed. In her first theatrical feature, “Dům” (House), writer-director Zuzana Liová takes on the idea of a stubborn and domineering father, Imrich (Miroslav Krobot), who has long dreamed of building houses on the family lot for his daughters. He can’t accept that times have changed since the idea was first hatched, soldiering on with the project although his children are now grown women with their own blueprints for life.

“For me, building the houses was the only way for the father to express himself during communism. He couldn’t do anything else if he wanted to express himself,” Liová told Czech Position. “So he stays this way. The houses are a symbol of the family. … In my film they are still in the process of making some changes [to the houses], and it is the same in relationships — there is change over time.” Whether Imrich acknowledges it or not.

Mixed in among the blueprints for the daughters’ houses are old children’s drawings showing what they might look like. At sometime in the past, at least one of the girls must have backed the idea. But the small Slovak village where the family lives offers little to make Imrich’s younger daughter, Eva (played by Judit Bárdos), want to stay. She is just finishing school and secretly has other ideas. Meanwhile, her older sister, Jana (Lucia Jasková), who married a local ne’er-do-well, has had a falling out with the father.

Stylistically, “Dům” looks back to the 1960s when Kitchen Sink dramas from Britain and French New Wave films put more emphasis on incidents than on plot — with many points shown visually rather than through words. The house meant for Jana, for example, sits half finished and is slowly being cannibalized for material to complete the one meant for Eva.

Eva’s boredom with her limited prospects, too, is shown is a scene that would have worked in a silent film. While putting flyers for a local pizza place into the mailboxes of a highrise building, she stops partway through. In the next shot, she is outside and jamming hundreds of the colored papers into the closest garbage container.

The tone and pacing work well, and the story rings true — in fact, the film began winning awards before it was even made. The first was a Hartley-Merrill International Screenwriting Prize for best national script in 2005, followed in 2007 by the Krzysztof Kieślowski Prize in the ScripTeast contest, which was presented at Cannes. Both contests focus on scripts from Central and Eastern Europe.

Understated performances also greatly benefit “Dům.” Liová said she tried to make the actors seem as natural as possible. As Eva, Slovak actress Bárdos is central to the film’s success. She refrains from inserting too much drama into the more emotional scenes, relying on small, sometimes almost imperceptible facial expressions.

Other scenes show how Eva has inherited some of her father’s stubbornness. At church one Sunday, where she is the organist, she and her father are feuding over her post-graduation plans — and she holds a note on the organ so long that it disrupts the service and leads her father into an angry outburst.

Liová began work on the screenplay in 2003. “My inspiration is ordinary life. I closely observe people and emotions, motives and story lines in life, and I combine it a little with my imagination to express my subject in the best way,” she said.

These incidents are woven into several threads that run through “Dům.”

Financial circumstances force Jana and her husband to return to the small town, but the father makes a point of snubbing them on every occasion — even when it causes public embarrassment. She has to move in with her mother-in-law but clearly isn’t welcome. Jana’s unfinished would-be home sits empty and is visible from her balcony.

More reasons turn up later to make Eva’s affair with a married man an even worse idea in a small town.

Eva also has more troubles than just those with her father. She starts an affair with an older man who gives her a lift one day after she misses the bus. The man, of course, is married. More reasons turn up later to make it an even worse idea in a small town.

The character of the mother, Viera (Taťjana Medvecká) is a bit underdeveloped but that, in a way, makes sense because she is also far in the shadow of her domineering husband. She tries to work some quiet diplomacy between the father and the daughters. Viera’s loudest statement is silently getting up from the dinner table and leaving after Imrich spoils what was supposed to have been a reconciliation before it even starts.

While Bárdos is key to the film’s success, even more important is Czech actor Krobot as Imrich, the father with some anger issues. Though Czech and Slovak co-production with a mixed cast, the selection of Krobot was not due to the co-production requirements. “Mr. Krobot was on my mind before the producers found Czech partners,” Liová said. The actor has played a number of crotchety screen characters as far back as “Wrong Way Up” (Příběhy obyčejného šílenství) in 2005.

“We tried to make Mr. Krobot’s character a man who is very angry and strong, but also very human inside so people who look at him have empathy. We didn’t want to make him just aggressive or tyrannical without reason,” Liová said.

Before “Dům” was finished, both Berlin and Cannes expressed interest based on a short trailer the production team had put together. The producers chose Berlin for the world premiere. “We had to open at an A category festival,” producer Michal Kollár, one of the founders of production company Fog’n’Desire, told Czech Position.

Since its premiere, it has won four more awards at film festivals. Krobot and Bárdos won for Best Actor and Best Actress at Art Film Fest Trenčianské Teplice in Slovakia, the film won the Student Jury Award at the Titanic International Film Festival in Budapest and a Special Jury Mention at the Vilnius International Film Festival (Kino Pavasaris). In all, the film was an official selection at 15 film festivals in the 2011 season. ‘The main hurdle for the project to go ahead was Zuzana’s ambition to direct it.’

Even though the script won prizes, it was still a difficult task to get the film made. “The main hurdle for the project to go ahead was Zuzana’s ambition to direct it. This protected her, I dare to say, from the usual suspects — shark producers from our countries, the Czech Republic and Slovakia, aiming for the surest thing to apply for [financial] support,” Kollár said.

Director Liová had experience from television, but film is quite different. Kollár said one of the most difficult parts of the production was finding the right way to tell Liová how making a feature film usually works. He was happy with the result, though. “We think she has done excellent job,” he said.

Kollár became aware of the script in 2007. “I remember reading about Zuzana winning a scriptwriting award in Cannes. It was an unheard thing for a Slovak filmmaker — especially a screenwriter. Up to that time, everybody was complaining about the lack of good stories. Actually it was the lack of well-honed craft. Not that we don’t keep suffering from that right now,” Kollár said. He was finishing his first film, “The Catfish Summer” (Poslední plavky), at the time. ‘This film is regarded as Slovak because of its director. For me, personally, it’s always been more Czech.’

Eventually Česká televize (Czech TV) and Slovenská televízia (Slovak TV), among others, became involved in the project as co-producers. As a result, the film exists in two versions. In the Czech version, several Slovak actors are voiced over by Czech actors. The converse is true in “Dom,” the Slovak version.

“This film is regarded as Slovak because of its director. For me, personally, it’s always been more Czech. And the financing is not the only reason. It’s Miroslav Krobot’s and Taťjana Medvecká’s performances. In Czech they perform in their natural languages, with all of the little humor nuances. I love that,”  Kollár said.

Meanwhile, fans who would like to go to the Slovak village of Malá Lehota to see the daughter’s houses are out of luck: They had to be torn down. “We are still in process of liquidation. Because of the lack of basic engineering — the most expensive part of the real construction, as we learned — they were unsellable. Another reason was … they were built on soft soil,” Kollár said.