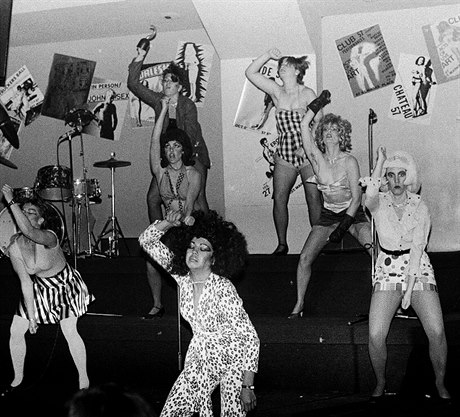 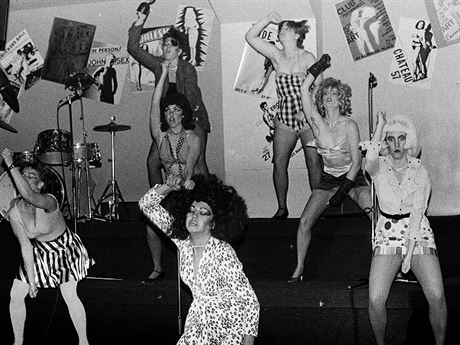 The Groovy dada lounge revisited is an exhibition of recently rediscovered photographs by Prague-based filmmaker and photographer Robert Carrithers documenting New York City’s early ‘80s bohemian underground that centered around the legendary Club 57. Among the show’s 64 photographs are portraits of artists Keith Haring and Jean-Michel Basquiat at the very outset of their meteoric rises to fame, as well as pictures of performance artist John Sex and a host of other filmmakers, performers, musicians and other characters from the East Village’s cutting edge.

The candid nature of many of the photographs in the show — along with the fact that they were taken by a participant — evokes the gritty, stimulating atmosphere of a time and community that is not as well-known outside of New York as it should be.

What distinguishes the roughly three-year run of Club 57 from earlier underground scenes such as the CBGB punk scene or Andy Warhol’s Factory is that its creativity wasn’t confined to one or two artistic mediums, nor even to art at all, but incorporated anything from theater, painting and live performance to events as way out as a reggae mini-golf night.

“That was the nice thing about Club 57; it was like a playground or creative laboratory where people from different mediums got together and inspired each other,” Carrithers told Czech Position.

The disregard for borders between artistic mediums had significant consequences for some of the individuals involved in the scene as well. It was no surprise at the time that Keith Haring went from being a performance artist to a painter, while John Sexbecame a performance artist from having been a visual artist.

The only room at the gallery not lined with Carrithers’ photographs is decorated by concert posters and a silkscreen of German singer Klaus Nomi done by John Sex. While many members of New York’s downtown scene considered themselves beyond shock, considering their exposure to the city’s crime and drugs as well as cutting edge art and music, Nomi proved them wrong by stepping on Club 57’s stage to sing opera.

John Sex and performance artist Wendy Wild were two of the prominent figures on the scene that Carrithers got to know well.

“They lived together and it was always funny visiting them at their apartment because the bell said Wild Sex,” he said.

The exhibition is extremely timely as the Club 57 scene has received a lot of media attention as of late, with former Club 57 regulars Ann Magnuson and Kenny Scharf reminiscing at Dazed and Confused magazine as well as a profile in New York magazine focusing on the origins of Keith Haring’s short but spectacular career. The reason Haring’s name is back in the news is because of a major retrospective of his early work being put on at the Brooklyn Museum, the first major exhibition ever devoted to the work he did from 1978 to 1982.

The end of an era

Carrithers also spoke about the forces that brought that period of collective creativity to an end. Drugs damaged and destroyed a fair share of promising talent, with the fatal heroin addiction of Jean-Michel Basquiat being the highest-profile case.

AIDS was another affliction that hit many Club 57 regulars at a time when the disease had yet to be identified, with Klaus Nomi and John Sex both succumbing to the disease just as their careers began taking off.

A less obviously destructive force on the scene was the increasing amount of money some Club 57 talents were able to draw on. Again, Basquiat’s situation is emblematic. Carrithers first met the artist when he was doing graffiti under the moniker Samo and was so broke that Carrithers would regularly buy him breakfast. After a period where Samo seemed to have disappeared, Carrithers saw him very well-dressed, insisting that he was no longer Samo but Jean-Michel Basquiat, a suddenly famous staple of prestigious downtown galleries.

Carrithers thinks that Basquiat might have become famous too quickly, with a host of false friends and hangers-on contributing to his early demise.

“It’s a sad story because it did happen too fast, but he was very talented. I wish I had collected his art. He gave me many color zeroxes and art, but I don’t know what happened to them. Now I don’t even want to think about it because his paintings sell for millions of dollars.”

Far from being a major problem the relative poverty of the Club 57 crowd served as a stimulus to their creativity. “People were happy to be creative then, working with very little money. It pushed them to do things they otherwise wouldn’t have done with money. When money entered the picture it started to be destroyed.”

Money had an even more far-reaching effect. In talking about his photos, Carrithers didn’t only lament the passing of time and the end of a vibrant, creative scene but the changes that New York and the East Village in particular have undergone. What was once a stimulating outpost of Bohemia, art, music, drugs and crime has become a neighborhood filled with Yuppies and coffee house chains where the apartment two blocks from Club 57 that Carrithers rented for $1,500 a year now goes for $2,700 monthly.

Just as some of the Club 57 stories ended in tragedy, the scene also led to some notable successes. Ann Magnuson jump-started her prodigious acting career with a role in the 1985 film Desperately Seeking Susan and has gone on to appear in a number of both independent and commercial films. Kenny Scharf has gone from painting the walls at Club 57 with Keith Haring (which were then painted over the next day to make way for the next night’s event) to having his work exhibited in major museums.

Scott Wittman and Marc Shaiman went on from doing theatrical performances at the club to creating award-winning Broadway musicals such as Hairspray.

One of the photos in the exhibition shows one of the younger regulars at the club, Debi Mazar, who today is an actress with a regular part on the TV series Entourage among other roles. Another photo shows former member of the No Wave band The Contortions, Adele Bertai, sitting in a half-lotus position surrounded by recording equipment.

“It’s nice to see people doing well, who survived all that craziness and are doing productive things,” Carrithers said.