The Šumava National Park director is ready to launch a bark beetle crusade, but people don’t realize it means the end of thick forests 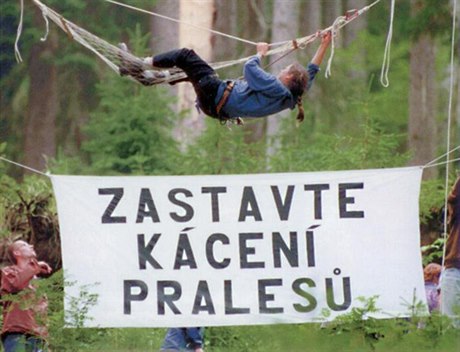 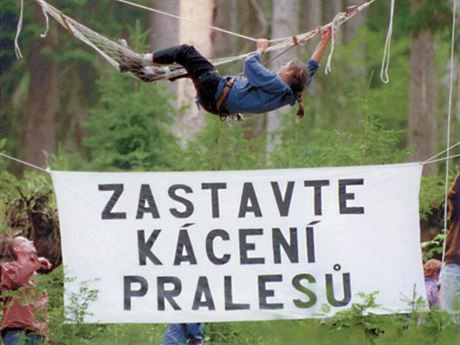 The volunteer director of the Šumava National Park (NPŠ), Jan Stráský, is ready to launch a crusade against the bark beetle. He intends to do so immediately to wipe out its first swarm. But he is oblivious to the laws as well as scientific opinion.

Stráský’s strategy is based on the plans of experienced yet professionally limited foresters, who know their age-old enemy the bark beetle very well and — viewing the prospect of a victorious battle — can’t see the forest for the trees. They are prepared to fight for the vision of the Šumava mountains of their youth, which most of them could only look at from beyond electrically charged fences as the area was close to the border with the West. But what will they leave behind them? Nothing but bare tree stumps.

Bark beetles, as their name suggests, reproduce in the inner bark of trees. They can cause significant environmental and economic when they occur in large numbers, damaging healthy trees as well as already weakened ones. But some scientists say the real danger is already past, and beetle numbers are already abating.

One truly shocking plan entails the idea that even wood from some precious natural locations is to be shipped off. And to prevent the bark beetle from being shipped off with it too, it will undergo thorough chemical treatment. Nature protection in Šumava will return to the communist “normalisation” period. The fabulous, beautiful, green, impenetrable Šumava will thus perhaps only be seen by our grandchildren.

And at that time, nature played into the foresters’ hands. What will be the difference between cut-down and dried-out areas, when in one place there will be tree stumps and in another dry monsters?

In terms of maintaining the green roof of Europe, there will be no difference. Yet in terms of further development, it will be abysmal. Forced reforestation will be carried out among the tree stumps. Saplings will sprout up among trunk torsos.

As a result, the fabulous, beautiful, green, impenetrable Šumava will thus perhaps only be seen by our grandchildren. That’s if the current executive power does not let it be “debauched” by giant harvesters and haulage mechanisms.

Keep Chalupa in mind when walking through the forest

It may seem that  further development of the Šumava mountains will result from the dispute between foresters and natural scientists. It is a tough political issue. And it comes as a surprise that a young ambitious politician — who the current Minister of the Environment Tomáš Chalupa (Civic Democrats, ODS) certainly is — has bet on old men’s reminiscences coming true. Chalupa will not be able to get away from the damage he will have done to Šumava until the end of his life.

If he does not want to spend just this electoral term in the services of the homeland and then start up a business, Chalupa should give serious thought to what such a controversial Šumava decision would do to his political career. His predecessor, Pavel Drobil (ODS), has succeeded in quickly wriggling out of a serious accusation of corruption, yet Chalupa will not be able to get away from the damage he will have done to Šumava until the end of his life.

In his defense, the young minister may have to obey the instructions from a power center, for instance, in Hluboká. In that case, he has no other choice. Yet if he does have a choice, this one is definitely the wrong one. Even if in some of the Šumava municipalities he may be cheered since they will have the feeling that Chalupa has liberated them from Šumava National Park’s administrators.

It is no secret that Stráský in the past poured sand into the tank of municipalities and protectionist officials – even from the position of chairman of the NPŠ’s board. But that is the past, and now he is the director. And he will undoubtedly remain in this post for a year.

Stráský should, however, be strictly ordered to thoroughly remake the conspiratorial conception of forest management in Šumava, in co-operation with all, meaning all, science professionals. After all, the status of national park was primarily conferred on Šumava to protect nature, not to serve as a venue for a forestry business with a tolerated natural-science component.

The dilemma has to be resolved without delay. Either the state will abolish the Šumava National Park and the timber will be converted into money, or it will retain it, in which case it must require a consistent nature-protection approach from its director. But are the new brooms at the Ministry of the Environment able to keep an eye on the political tourist at the helm of the national park? For the time being, Stráský is acting like a prima donna whose decision is sacred. Nature, however, deserves humility.

We will soon come to know who is calling the tune. If the Ministry of the Environment approves Stráský’s proposal for declaring a natural calamity, the lumber companies will rejoice. They could even enter the current nonintervention zones to cut and cut. Stráský has obviously not been told by his advisers that the bark beetle is running scared and is now withdrawing from many places demarcated for timber harvesting. Active hotbeds of bark beetle occurrence have been becoming weak, and the forest has finally begun to rejuvenate itself. Besides being a waste of money, it is also an act of sabotage.

Natural science institutes and schools are convinced that logging in such places is not only useless but actually harmful. It took a lot of effort to eject chemistry from the forest management mix in Šumava. Now, by Chalupa’s authority, the national park’s new director intends to introduce it in even the most naturally precious zones. And it shows a complete lack of humility to plant young trees in the nonintervention areas, which have a sufficient potential for natural rejuvenation. Besides being a waste of money, it is also an act of sabotage against those scientists who have been monitoring the original forest’s rejuvenation abilities.

By means of mass felling, Stráský’s engineers want to change parts of the Šumava nature and trade it in for timber. So where exactly can we expect the chainsaws and transportation mechanisms to appear, leaving behind a moonscape? The logging destinations allegedly include the Mlynářská and Rybárenská moors, the Jezerní and Mezilesní bogs, as well as the Černohorský swamp and the Tetřevská bog. The list also contains the Chalupská bog where, according to Jaromír Bláha from environmental group Hnutí Duha (Friends of the Earth Czech Republic), spruces are scarce.

The greatest attention is focused on Smrčina and Hraničník. These locations were talked about as being suitable for a ski slope, yet following unexpectedly strong opposition to this plan the rumors have died away. But now they have been selected as destinations for felling as part of the crusade against the bark beetle. Soem say this is not a mere coincidence. How long will it be before one of the most precious Šumava forests is replaced by a ski slope dreamed of by many skiers?

There is also a rumor about a cable car facility being built that would carry Czech skiers to the area on the other side of the hills. Jakub Hruška, who was the head of a science section until it was recently closed down, said once it is there a pub will emerge at the final stop. And since the pub will undoubtedly be doing great business, it will need supplies, for which the ropeway would not suffice, and therefore a road will be constructed too.

How long will it be before one of the most precious Šumava forests is replaced by a ski slope dreamed of by many skiers, including the head of the Czech state himself? Despite the logic of nature protection, the weak naturalists, pushed into a corner, will be in no position to prevent this from happening.

Nevertheless, they have expressed the opinion that the crisis management proposed by the current director of the Šumava National Park administration is heading toward irreversible losses in terms of nature preservation and toward the destruction of the national park as a large area with the highest degree of protection. It appears that Stráský has made just one correct decision — withdrawal of the application for a European Council Diploma. Since under his command Šumava will not posses the prerequisites for being included in the International Union for Conservation of Nature Category II, listing the most precious areas with unique biotopes.