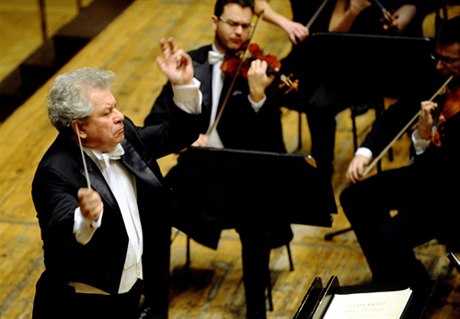 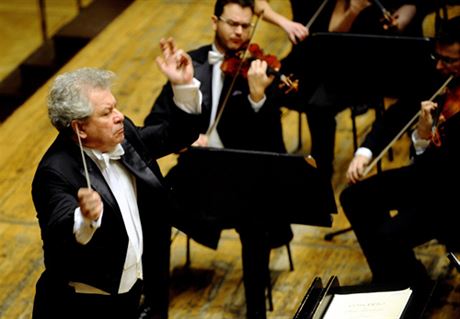 COMMENTARY by Pavel Pokorný / Czech Position earlier this month reported on the incomprehensible withholding by the Ministry of Finance of funds intended to increase salaries of the National Theater and Czech Philharmonic Orchestra musicians raised a question that deserves broader attention. The question is: Has the Keeper of the Exchequer Miroslav Kalousek thought about the possibility of Jiří Bělohlávek thinking better of his upcoming engagement if the performers of the premier Czech orchestra do not receive at least average pay for their good work?

The world-acclaimed conductor (granted the honorary title of Commander of the Order of the British Empire (CBE) this week by Queen Elizabeth II) is to take up the position of chief conductor of the Czech Philharmonic Orchestra after the summer, with considerable ambitions. Bělohlávek wants to return the Czech Philharmonic Orchestra to the ranks of the top ten symphonic orchestras of the world. However, it means that the philharmonic, directed by David Mareček and conducted by Bělohlávek, is to undergo major changes that won’t happen without some cost.

One of the maestro’s fundamental conditions for the future cooperation, already agreed with the previous Minister of Culture Jiří Besser (TOP 09)  in December 2010, is a pay rise for the musicians. According to the (already former) deputy of the Culture Minister Radek Zdráhal, the average salary of Czech Philharmonic Orchestra employees is about Kč 22,000. All other plans were to pick up following the salary increase and conductor Bělohlávek was to start his work in the autumn without other worries.

However, Kalousek remains hesitant regarding the salary rise since, according to what told Czech Radio, “the Czech Philharmonic Orchestra is merely a small component of an extensive task called the Ministry of Culture.” He did not bother to respond to Czech Position’s questions about his reluctance to release the previously promised – and available – Kč 150 million. Kalousek not only risks the loss of motivation of top-class musicians, he is also gambling on the patience of Bělohlávek.

The Finance Minister not only risks the loss of motivation of top-class musicians, already dispirited by their below-average salaries, he is also gambling on the patience of Bělohlávek and the likelihood of his resignation from the post he hasn’t even taken up yet. The minister may be unaware or has forgotten, or doesn’t care, that the 66-year-old conductor has resigned twice already. The reason for his previous resignation was always the failure to deliver on previously promised “government guarantees.”

At the end of April, in an interview for the Friday magazine of the daily paper  Lidové noviny, the maestro maintained his spirit and patience, even expressing enthusiasm for taking up the post with the Czech Philharmonic Orchestra. We shall see…

When Bělohlávek received his letter of appointment to become the leader of the National Theater’s opera section from the then Culture Minister Pavel Tigrid in March 1995, all looked rosy and nothing seemed to threaten his actual taking up the position from  January 1 1998.

As late as in April 1997, the conductor said in an interview for the daily  Mladá fronta Dnes: “A fundamental reorganization is necessary at virtually every step. But anyway, this impression, or requirement, formed a part of my negotiations with the ministry two years ago, it is nothing new. After all, without far-reaching modifications I cannot deliver what is expected of me, that is an advance in the quality of the National Theater’s opera and achieving levels comparable to the world’s leading stages.”

However, he also voiced some suspicion and qualms in the interview that the requested increase in the body’s budget was unlikely to materialize and that there was a distinct lack of will to change anything. (By the way, Bělohlávek had requested an increase in the opera’s annual budget by Kč 35 million).

He eventually gave up in June 1997 and resigned from the appointment. “We failed to reach the starting line we had previously set. As a result, my concept is not feasible and we just have to wait. Perhaps, it is only a matter of patience,” said the artist, who, for example, had already worked as the main guest conductor of the BBC Symphony Orchestra at the time.

The second time Bělohlávek ran into trouble with ministerial guarantees was a few years later in Slovakia. In March 2003, the media reported on his planned appointment as the chief conductor of the Slovak Philharmonic Orchestra. “The decisive factor here is the existence of a political will to strengthen the social and artistic prestige of the Slovak Philharmonic Orchestra. And that is what makes it tempting,” Bělohlávek responded back then to an enquiry from the Czech Press Agency (ČTK) into the reasons for his likely move to the Slovak capital, Bratislava.

When did it all go awry then? Quite soon, actually. In May 2004, a dispute flared up between Bělohlávek and the Slovak Culture Ministry, which did not want to keep its promise of a subsidy to the tune of 15 to 20 million Slovak crowns to the Slovak Philharmonic Orchestra, requested by the designated chief conductor. Without the subsidy, Bělohlávek could not “carry out the planned qualitative transformation of the musicians’ base,” and left in June of the year, causing “Slovak culture to lose one of its most prominent contemporary artistic personas.” He was replaced in Slovakia by his Czech colleague Vladimír Válek while Bělohlávek forgot about his quarrels with politicians at the conductor’s stand of the BBC Symphony Orchestra.

In order to dispense with any suspicion that leaving a post even before actually taking up the position is a specialty of Bělohlávek, rest assured that it is not. There is no need to search far and wide for other examples. Many will remember the frequent media reports on Jakub Hrůša, the chief conductor of the Prague Chamber Philharmonic (i.e. a body founded by a resentful Bělohlávek following his rejection by the Czech Philharmonic Orchestra in 1992) having won a tender to become the music director-designate of the Royal Danish Opera in Copenhagen.

It was undoubtedly a great success of the talented 30-year-old conductor who was to assume his position beginning with the 2013/14 season. Unfortunately, it was decided at the end of the last year that the Copenhagen theater’s budget would be slashed by some 100 million Danish crowns (more than Kč 300 million). As a result, the opera’s artistic director, Keith Warner, who had selected Hrůša to come to Copenhagen, resigned prematurely. It spelled the end of the promising Czech conductor’s Danish adventure, a fact not reported by Czech media. Hrůša recently confirmed to Czech Position that he would not take up his appointment with the Royal Danish Opera in 2013.

There is no doubt that Bělohlávek honestly wishes to turn things around by 180 degrees.

In addition to his post with the Prague Chamber Philharmonic, Jakub Hrůša also acts as the director of the musical project Glyndebourne on Tour and is the main guest conductor of the Tokyo Metropolitan Symphony Orchestra, while also collaborating with other top orchestras abroad. He will certainly not suffer from a lack of opportunities.

Moreover, he has a personal motivation to deliver miracles with the Czech Philharmonic Orchestra. Since his forced retirement from the body in 1992, the orchestra has rather tended to move downhill and there is no doubt that Bělohlávek honestly wishes to turn things around by 180 degrees. Kalousek should not let a situation arise in which the most famous Czech conductor would change his mind about his upcoming appointment…