The menu by the much adored Jana Florentýna Zatloukalová is perfect, but there are some issues when the food is served up 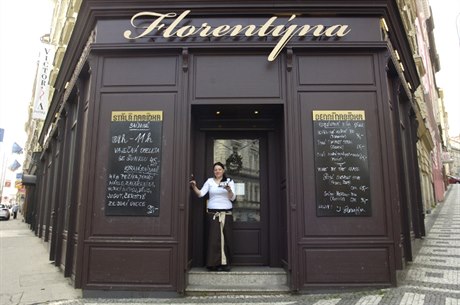 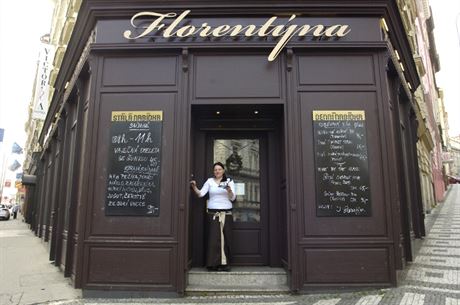 When passersby stray into Bistro Florentýna, little do they realize where they are. At best they may recall that this is where the Kuře v hodinkách restaurant and music bar used to be. Except for the new, sweeping sign above the entrance, there is hardly anything new out front; even the phrase “music bar”  is still there in cog lettering.

Even inside, one can find a 1979 poster for Prague Jazz Days on the way to the toilets. Clearly, the music bar has survived, what about the restaurant? The owners have kept the decoration rather earthy, bare, gray-beige walls with a dark roller pattern, a couple of “crystal”  chandeliers hanging from the ceiling,  inconspicuous tiling on the floor, probably also original, the same dark colour as the rather impractical looking bar opposite the entrance.

The more boring the establishment’s interior, the more animated its web pages. The uninitiated really have no idea that under the ubiquitous slogan “Chuck in a Heap of Love” (Vraž do toho kopu lásky) one finds the Florentyna.cz, a discussion forum, chat room, Facebook page as well as the virtual Bistro Florentýna including “Recipes from the Bistro.”

Understandably, the entire project is masterminded by one woman — Jana Florentýna Zatloukalová alias Flo, the author of the currently sold-out “Cookbook for a Daughter” (Kuchařky pro dceru), which the more observant visitor will find exhibited right next to the restaurant’s entrance (the cookbook, not the daughter or the author).

All of this virtual reality unsettled us, so, without much ado, we decided to go and order a tangible sample of the cuisine.

First off, Flo’s menu looks fantastic — we didn’t see one thing that didn’t tempt us. Moreover it charm’s with its fresh, seasonal ingredients (few can resist) and the traditional, honest, First Republic practices (which no one can resist). In short, it’s a job to choose. In the end we opted for cream of garlic soup; roast chicken with Swiss chard, stuffing and potato croquettes; and roast duck with red cabbage in apple juice and potato pancakes. We had no worries that our fellow travelers on the metro would turn their heads in disgust.

The soup was well-presented. The center of the plate was decorated with two long strips of toasted baguette forming a cross, the top has pieces of a crispy green curly lettuce, a few drops of oil, two sprigs of rosemary and slices of roasted garlic. The cream is suitably thick, a very distinct taste, nonetheless the heat treatment that the garlic went through pleasantly blunted its aggressive tang, so we had no worries that our fellow travelers on the metro would turn their heads in disgust. In short, no complaints; the soup was a delight to all senses.

The first of the main courses was half a baby chicken in a pool of its own juice; unfortunately the chopped chard, flavored with cream and garlic, cooled somewhat on its way from the kitchen, but as a less-common alternative to spinach it definitely had flair; the bread stuffing, wrapped in a slice of prosciutto, had a homemade taste (if one knows how to make it).

It could easily have been a tad thicker, otherwise we didn’t notice any other attempts at minimalism. The potato croquettes were a truly delicious affair — four large, fried, conical potato croquettes, softened with Parmesan. Perhaps a bit unusual to serve with chicken, but truly wonderful

In the meanwhile, we were looking forward to the duck, well, until it reached the table. The plate was desperately swimming in a sea of grease, and the thigh did not awaken any hopes. For purely professional reasons, we wanted to give Florentýna a second chance, so we cried ‘bring it on!’It was a nonstarter: the skin didn’t appear crispy, rather somewhat wizened, perhaps the grease was meant to compensate for this. To top it all, there were still some remnants of feathers sticking out. It was almost impossible to separate the meat from the bone, and it was so tough and unpleasant that after several futile attempts we gave up.

The dry roasted potato pancakes, tasty enough on their own, were little recompense, when the entire dish was literally permeated by fat. The red cabbage, albeit a bit bland, was not bad, but our fears for our gall bladders ordered us to return the creation to the kitchen. The first ebullience was tempered by our disappointment.

The waitress apologized ruefully and offered homemade pirohy with cream cheese as salve for our wounds. For purely professional reasons, we wanted to give Florentýna a second chance, so we cried “bring it on!”

The replacement, however, did little for our impression. The pirohy, covered in fried green onions, were overcooked and squishy in the middle.

Without overwhelming enthusiasm, we tested the dessert — a small chocolate cube with hazelnuts and a mass of whipped cream. To be honest it wasn’t insulting, but neither was it stunning. Harder than it should have been, which, with the frothy cream, created a slightly undesirable contrast. The coffee was good.

So to recap, we felt:

But we don’t want to believe that Flo always fouls up. Considering that the rabbit with polenta escaped us (apparently exhausted on the day of our visit), as did the roast pink seabream and several other delicacies, it is possible that we shall pay a return visit to Bistro Florentýna. We sincerely hope that next time it will be better.

Message for guests:
Look forward to a congenially set menu and affable prices (we paid Kč 539 for the above).

Message for the establishment:
If the cook really insists on serving duck gravy, then pour it into a gravy boat; that way the guests can take as much as they want.