Civic group D.O.S.T. hopes to acts as a bridge for conservative group; Sovereignty wants them to unite under one banner 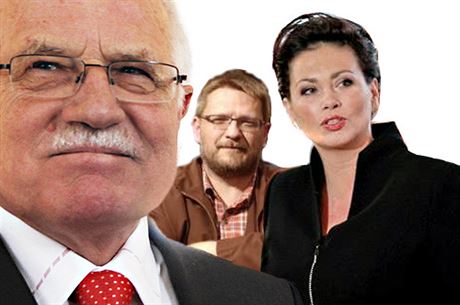 At first glance, it seems obvious that the Czech political groupings subscribing to the ideas of President Václav Klaus and taking a critical view towards further European integration should form a coalition to improve their chances of winning seats in the lower house of Parliament in the spring 2014 contest.

But who can unite them? And how? On closer inspection, there appears to be less space for collaboration. The non-parliamentary party Sovereignty (Suverenita) led by Jana Bobošíková, the Party of Free Citizens (SSO), and the ultra-conservative civic association D.O.S.T. are hardly a homogenous bunch.

Czech Position last week published an interview with SSO chairman Petr Mach — the former head of the Center for Economics and Politics (CEP) think tank founded by Klaus in 1998 after he stepped down as prime minister — that caused a bit of a stir among these non-parliamentary hopefuls.

Mach said Bobošíková’s Sovereignty is a competitor not for his party but for the upstart parties on the left founded by Miloš Zeman and Jiří Paroubek, both former Social Democrat (ČSSD) prime ministers. As for D.O.S.T. (which stands for “Trust, Objectivity, Freedom and Tradition” and whose acronym means “enough”), he said past collaboration had proved disappointing. He also cast doubt on Klaus’ support for them.

The casual observor could take from this that a battle is underway to win the support of the Czech president, whose second and final term as head of state ends in March 2013, in the next parliamentary elections. What do Bobošíková and D.O.S.T. chairman Michal Semín have to say?

D.O.S.T. was thrust into the public eye on a wider scale in December thanks to the divisive figure Ladislav Bátora, the association’s co-chairman before Semín took over the reins. Bátora was pushed to resign as personnel chief at the Minister of Education due to human rights groups’ objections to his past flirtations with Czech fascist groups spouting xenophobic and racist ideologies — and for insulting the chairman of the center-right party TOP 09, Karel Schwarzenberg, the current foreign minister.

The civic association appeals to right-wing conservatives intent on protecting Czech “national interests” and opposed to trends towards further integration in the European Union — as well as the influx of immigrants. Whatever Mach may believe, Semín appears confident the Czech head of state will stand behind them once he can freely do so. ‘[It] is futile to bicker over who he supports more. It’s like small boys arguing over who can piss further.’

“We don’t want to row with anyone for the support of President Klaus; however, we know for certain that we will have his support,” Semín told Czech Position, stressing that D.O.S.T.’s manifesto is in line with Klaus’ positions. “I hope that Petr Mach’s project is successful and that he gets the support of Václav Klaus. But it is futile to bicker over who he supports more. It’s like small boys arguing over who can piss further.”

According to Semín, D.O.S.T. doesn’t plan to participate in the parliamentary elections — but it will try to act as a bridge for conservative right-wing entities that are “ideologically close” to its manifesto. He says political success would be easier to achieve together while retaining their individuality and diversity of opinions. One opinion the civic association strongly holds is that further European integration must be stopped.

“It a question of further centralization of power in EU institutions, a return to greater sovereignty of the member states, or event the disappearance of the European Union in the form that we know it,” Semín said. “Parties like Sovereignty, the Conservatives (KS), the SSO and Law and Justice (PS) have similar views in this respect. We consider it important that these groups seek some form of cooperation that leads to promoting our common positions on the Czech political scene.”

Such cooperation could already manifest itself in this year’s Senate elections, he said, with D.O.S.T. planning to lead negotiations with like-minded groups to support some candidates while in some regions they may compete against each other. One such candidate the right-wing parties could rally to support is Sen. Petr Pakosta from the Náchod region, who recently left the Civic Democrats (ODS), the party of which Prime Minister Petr Nečas is chairman.

Who will replace Klaus – and where will he go?

Semín also says that D.O.S.T. is ready to support SSO’s candidate to succeed Klaus at Prague Castle, adding that the presidential campaign is a way for the party to promote its platform. “However, Jana Bobošíková is also a candidate. To be honest, we have yet to resolve this and Ms. Bobošíková has not yet asked for our support,” he said.

D.O.S.T. could support other candidates as well. “If Jiří Karas, the former Christian Democrat (KDU-ČSL) politician who is now a diplomat in Minsk, decides to go against the party’s wishes and run, he would be an interesting candidate for a majority of people from around D.O.S.T. circles,” he said; the KDU-ČSL’s official candidate is MEP Zuzana Roithová.

In any case, Semín says he would like to see Klaus remain in politics after leaving Prague Castle.

“It doesn’t matter how — whether through a think tank or a return to party politics. Personally, I would very much like, without wanting to advise the president, that he create from his initiatives a cross-party platform for like-minded political parties and movements, critical of the present form of European integration,” he said.

“It could give rise to an alternative concept of cooperation among European nations, which Klaus is also considering, in calling for a return to the pre-Maastricht Treaty model.”

Jana Bobošíková, meanwhile, has a bone to pick with Petr Mach following the publication of his interview with Czech Position. “We welcome differences of opinion — but not lies. I reject the assertion that Sovereignty has snubbed Václav Klaus. I have said for many years that in many cases what he has said — especially as relates to European integration and the euro — resonates with us. …

“I also said I would not expect any support from Václav Klaus. I’m not saying I would not accept it, which is an entirely different thing. It’s clear that every party would be pleased to have his support.”

A former advisor to Klaus who herself stood in the 2008 presidential elections, Bobošíková came to the public eye as a TV moderator. Her campaign  in the 2010 parliamentary elections resulted in Sovereignty just failing to get over the 5.0 percent threshold necessary to win seats in the lower house of Parliament (Chamber of Deputies). ‘I think that upcoming elections will not be a strict division of right-left, but I think European integration, the euro and national interests will play a big role.’

Bobošíková, too, would like to see the parties that are opposed to the Czech Republic adopting the euro and critical of the current model of European integration cooperate. “I think that upcoming elections will not be a strict division of right-left, but I think European integration, the euro and national interests will play a big role,” said the former MEP. “For these reasons, Sovereignty does everything it can so that like-minded parties and personalities come together under one so-called brand.”

Sovereignty takes pride in having drawn in to its grouping some members of Mach’s SSO, the Green Democratic Party of Olga Zubová and even some radicals from the ODS. Observers see it as a magnet for Czech nationalist-populist extremism.

That said, Bobošíková completely rejects Mach’s assertion that Sovereignty will be competing with the left-wing parties of Zeman and Paroubek — or the main opposition Social Democrats (ČSSD) for that matter — for what may be considered the protest vote against the ruling and highly unpopular center-right government of ODS, TOP 09 and Public Affairs (VV).

Mach appears not to understand basic political science, she said. “Sovereignty is a political party with its own program and is not defined as right or left … Sovereignty appeals to all citizens.”

Bobošíková said in an interview with Czech Position in September that Sovereignty can expects to get 15 percent of the vote next spring (although it got 3.67 percent of the vote in the 2010 elections). How does she see her party’s prospects now? “If we can capture media attention — comparable to the other parties — I still believe that Sovereignty can reach up to 15 percent.”