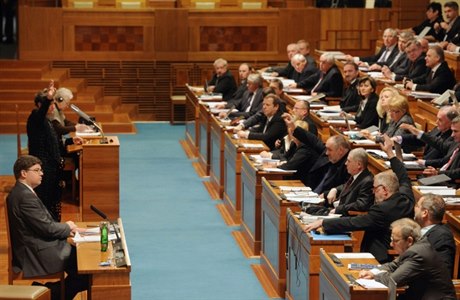 The Senate vote sweeps in a popular vote for a president whose powers have actually been curbed foto: © ČTK, Česká pozice 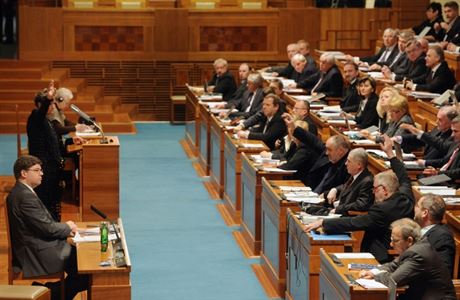 Czechs will vote directly for a new president when the current incumbent Václav Klaus‘  term expires at the start of 2013.

That was the result of a close vote in the upper house, the Senate, late Wednesday which overcome the last main legislative hurdle standing in the way of the fundamental change in the country’s political and legislative landscape.

The Senate vote showed 49 of the 75 present lawmakers in favor with 22 against and six leaving the chamber during the proceedings.

Detailed rules for the direct vote drawn up by the Czech Ministry of Interior still have to be passed into law and the constitutional change itself signed by the current president, who has already described the planned change as a “fatal mistake.”

But the vote essentially is a starting guns for some of the already declared contenders for the presidential post,  and those who still have to surface, to start their preparations in earnest.

There is also a chance that the job could stay in the Klaus household. The president’s wife, Livia Klausová, has declared that she would consider running if Švejnar stands again because she regards him as unsuitable for the post.

Under the rules, any Czech with 50,000 signatures from supporters can join the race to be head of state. A possible shortcut to that would be backing from 20 members of the lower house of parliament or 10 senators from the upper house.

‘I am glad that we fulfilled the promise we gave to citizens.’

The presidential election will be a two-round battle if no single candidate wins more than 50 percent of all votes cast in the first round. The two highest scoring candidates from the first round would go through for a head-to-head battle in the second round with the one getting most votes declared the winner.

Ahead of the Senate showdown, many political commentators questioned whether Czech political parties would find enough common ground and courage to push through such a fundamental change.

The problem faced by one of the main backers of direct presidential elections, the main left-of-center opposition ČSSD, was that the move is popular in the country and failure to push it through, whatever the misgivings about its final form, would have looked like breaking a pledge to the Czech public. “I am glad that we fulfilled the promise we gave to citizens,” commented ČSSD Senate head, Milan Štěch. “If the overwhelming majority of the ČSSD group had not been in favor, direct election of the president would not have got through,” he added.

‘He [the president] will be able to block the government, refuse to nominate,  refuse to dismiss or sign, veto, override decisions of judges, and delay decisions.’

Civic Democrat senators led the critics of the change on Wednesday, although Prime Minister Petr Nečas (ODS) had demanded they back direct elections. The critics underlined the fact that the change shifts the political balance away from a parliamentary and a party-based system. Direct elections will give the future president the moral and political authority to point out that he/she was directly elected by the people and could stir up a series of battles over who is really representing the people’s will. “He [the president] will be able to block the government, refuse to nominate,  refuse to dismiss or sign, veto, override decisions of judges, and delay decisions,” warned ODS senator Jaroslav Kubera during the Senate debate.

Ironically, some of the president’s powers will actually be diminished under the new direct election regime. Instead of being a full presidential right as now, the granting of amnesty in the future will have to be carried out in consultation with the prime minister or responsible minister. The grounds for removing a sitting president, apart from treason, are also widened to include severe breach of the constitution.  The president’s immunity from prosecution will also be limited to his term in office and not his/her lifetime.