Did control over gas pipelines spark the Soviet invasion of ’68?

Moscow sent Soviet and Warsaw Pact troops to crush 'Socialism with a human face' but also moved gas pipelines to the ČSSR after the occupation. 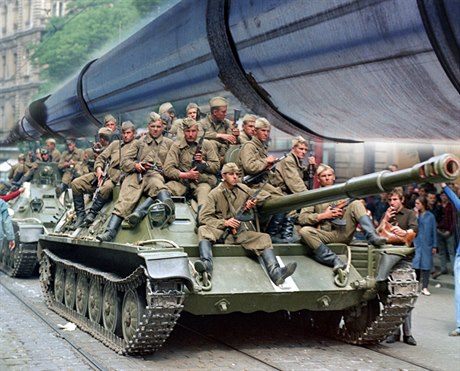 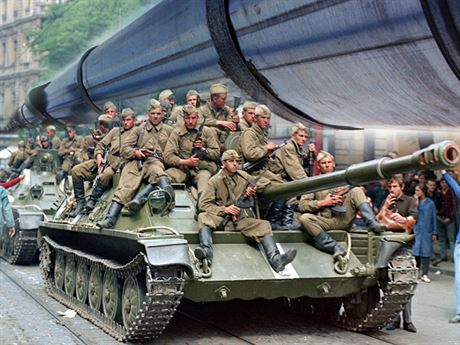 Remember the film “Marathon Man”? Before he starts torturing the hero with his dental drill, the villain asks him, “Is it safe?” — leaving the hero puzzled before his suffering begins. I don't know why, but this scene always comes to mind whenever the topic is raised of the possible threat that Russian interests pose to Europe.

Leaving aside those Czechs who are indifferent to such topics, we find a broad range of opinion on the matter — which is quite rare — ranging from belittling it completely, to a sense of alarm verging on hysteria.

These extremes of opinion are not necessarily connected to whether people expressing them are occasionally treated to caviar at the Russian Embassy, or, on the contrary, have not forgotten some White Guard great-aunt who was abducted after the war and taken back to Mother Russia by an NKVD commando.

So let’s attempt to make an independent, and to the extent possible, objective analysis of the past, present, and likely future — the trade in natural gas trade was made for such an analysis. But first let’s return to the mid ’60s.

The Cold War atmosphere in the sharply bipolar Europe of the day had started to thaw a bit. The “comrades” were less watchful and vigilant, allowing people some breathing space. During that time, the first Russo-Czechoslovak gas projects came into being. The impact of the secret talks 40 years ago still reverberates today in a Europe that has since seen a sea change in its balance of power.

The Brotherhood pipeline network — built with the primary, albeit hidden, military purpose of transporting fuel to the anticipated frontline in the case of a war — first brought Russian natural gas to the Slovak side of Czechoslovakia, and later also to the Czech side. What’s more, the pipeline was also linked to Austria.

But it wasn’t until the end of the ’60s that the first talks on the supply of large quantities of Russian gas were held between the Soviet Union on the one hand, and Austria, Germany, Italy and France on the other. The gradual construction of a system of transit pipelines passing through Czechoslovakia followed.

Pipelines with a ‘Soviet face’

A bit of history and a brief note on this matter: The Prague Spring, a period of political liberalization in Czechoslovakia that began when the reformist Alexander Dubček came to power, was crushed in August 1968 when the Soviet Union and thousands of Warsaw Pact troops invaded the country. Czechoslovakia remained occupied until 1990. Some people also associate the Soviet occupation of Czechoslovakia with the USSR’s perceived aim to gain territorial control over the future route of this gas export pipeline.

Supporting this theory is the fact that gas pipes originally laid out in Poland were at a later stage transferred to Czechoslovakia. Moreover, on Dec. 12, 1970 — at a time when Red Army soldiers still hung their fur caps on the walls of Czech army barracks — the Czechoslovak government adopted a top secret resolution on the construction of a transit pipeline. It was so secret, in fact, that it was not assigned a reference number.

The outcome of talks held in the late ’60s and early ’70s between governments from the East and West would do more than shape trade relations between the USSR and four advanced West European economies during that period. Its impact still reverberates today in a Europe that has since seen a sea change in its balance of power.

In the beginning, Soviet economists made a crude strategic blunder. As is well-known, the price of natural gas is determined by how the price of oil and a mix of oil products develop over a period of roughly nine months. In the early 1970s, however, oil production had been outstripping demand for a very long time; so it doesn’t take an economist to reach the obvious conclusion that oil prices went into a lengthy decline.

With a view to price predictability, this must have been rather frustrating for central planners, considering their economic mindset.

Efforts to achieve long-term stabilization and predictability of natural gas revenues resulted in the introduction of a so-called import agreement escalation clause, which to a considerable extent leveled out anticipated revenues by strongly limiting the influence of oil price variations. In practice it went like this: Only roughly 5 percent of the annual difference in the price of oil, regardless of whether it was a drop or a rise, was calculated into the price of gas for the next period.

Initially, this worked to everybody’s satisfaction, until the end of the 1970s, when two oil crises erupted, leading to an exponential increase in global oil prices. And the price escalation clause worked. Although the purchasing prices appearing in the annual contracts corresponded with global prices, the actual purchasing prices for the four Western European gas companies were about 30 percent to 40 percent lower.

For them, the Golden Age had begun. They charged their clients the global prices – not the actual purchasing price – thereby providing these privileged companies huge revenues for years on end.

Now, we should examine the origins of the nonstandard relationship between Russia’s Gazprom and Western European natural gas companies, or rather their governments, because apart from Germany’s Ruhrgas, the others were more or less state-owned enterprises.

To an extent, this pragmatic relationship is in place even today, if we ignore certain excesses like “natural gas traders” where, it seems, personal financial gain has reached absolute heights. And let us also ignore the fact that a prominent German politician, Helmut Kohl, exchanged his government seat, without any scruples whatsoever, for a position with a Russian natural gas giant.

Instead, let’s take a closer look at how the issue of energy security with respect to relations with Russia is dealt with by political representations in the collective bodies of the European Union. Europe is clearly divided on the issue.

On the one hand, some older EU member states (that is, some in the EU-15), do not see Russia as a serious threat in this respect and are not very eager to participate in protective measures of any sort. But one should realize that these dovish countries have a high level of import diversification, with Russian natural gas not exceeding 25percent to 30 percent of their overall consumption.

New EU member states, however, like Slovakia or the Czech Republic, which joined the bloc in its 2004 expansion to the East, are calling for common approaches and measures to protect them from possible economic and political extortion by Russia. These countries depend either wholly or heavily on Russian natural gas supplies. The Czech Republic and Slovakia are those calling for a common EU approach to preventing economic and political extortion by Russia.

All those railing against Brussels should know that the European Commission does its utmost to ensure the security of the EU in this regard. But the Commission is not an arbiter between western indifference and eastern apprehension. Instead, it has defined a common policy concept aimed at securing immunity of the European natural gas markets from attempts by nonmember states to gain political advantages and influence of power through international trade.

The so-called “anti-Gazprom” act and related measures arising from a certain paper No.1 outline the areas of competence permitted to non-EU suppliers. The EU directive, making reversibility of gas flows in European gas transmission lines a mandatory technical requirement, constitutes a much higher level of protection against critical stoppages in natural gas supplies — by any and all suppliers to Europe. It is also very important to increase the diversification of natural gas suppliers and to complement the gas transmission networks of Central and Eastern Europe with a North-South interconnector; these issues will be covers in upcoming articles.

With every new collective EU measure, Russia’s potential to misuse its natural gas supplies to fuel its imperial ambitions grows weaker. Every project ensuring a higher level of import diversity brings us closer to the day that Russia stops considering its gas exports as a tool for exerting political influence and closer to what we want the country to be: a serious trading partner.

The EU member states do not scorn Russian natural gas; it is bound to remain a significant source of energy in the future. What they do reject, however, are the admittedly already waning political practices that induce a sense of fear. With relief we can say that — at least when it comes to the natural gas sector — the specter of those August nights of 1968 has finally lost its ominous shadow.