One of the landmarks of modern theater, Peter Weiss’ Marat/Sade, will be performed at Prague’s Bohnice psychiatric hospital 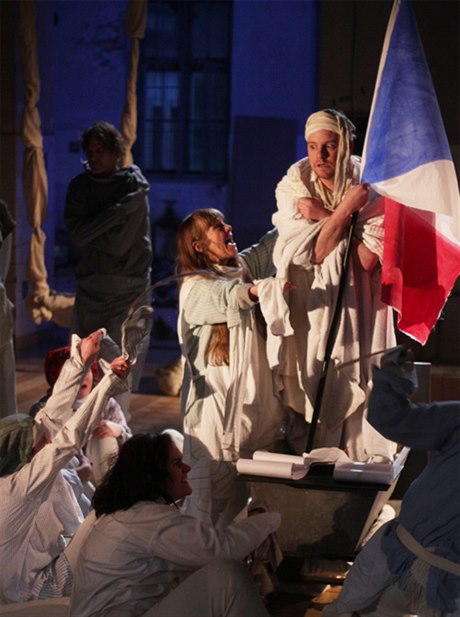 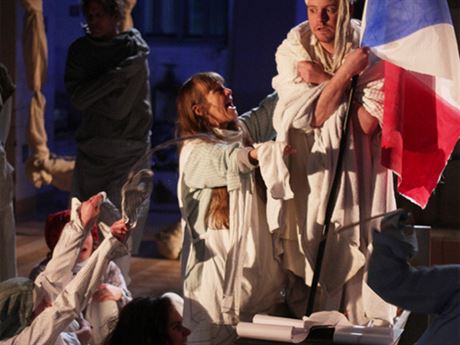 As a play about asylum inmates putting on a play of the death of French revolutionary Jean-Paul Marat, Weiss’ work already casts a kaleidoscopic glance at political conformity and extremism of two distinct eras of history. With the upcoming performances taking place in an abandoned space in Prague’s largest psychiatric hospital, a whole new chapter of modern history is added to the mix.

Marat/Sade is the abbreviated version of the play’s full title: The Persecution and Assassination of Jean-Paul Marat as Performed by the Inmates of the Asylum of Charenton Under the Direction of the Marquis de Sade. Weiss used the historical fact that the infamous Marquis de Sade directed plays while an inmate at Charenton and was somewhat sympathetic to some aspects of the revolution (he was one of the prisoners freed when the Bastille was stormed) to reflect a crucial moment of the revolution through the prism of psychiatric patients in 1808, fifteen years after the revolution during the reign of Napoleon Bonaparte.

For Canadian artist and filmmaker Althea Thauberger, looking back at a revolution after a number of years have passed can be applied to the Czech experience 23 years after the Velvet Revolution as well. Thauberger is producing the play being done by Prague-based experimental theater group Akanda and its director Melanie Rada.

“Akanda’s take on Marat/Sade is different than the versions of the play I’ve seen. There is a lot more absurdity and a vacillation between emotional intensity and slapstick, at times even verging on camp,” Thauberger told Czech Position.

Thauberger’s previous work has similarly involved organizing artistic projects with groups or communities that are characterized by a certain isolation, as the patients and staff of the Bohnice hospital are. Previous projects have included a photographic series with female soldiers in Afghanistan, a performance with new mothers and their babies in Copenhagen and a photographic mural with members of a folk theater troupe in Indian-administered Kashmir.

Scenes from the bathhouse

As the play within Marat/Sade was set in Charenton’s bath house, it is appropriate that the current production is being performed in Bohnice’s former laundry (Prádelna Bohnice), which has become a space used for artistic endeavors. While the appearance of the space seems highly evocative of communist-era buildings that were left to fall apart due to lack of maintenance, Thauberger points out that the laundry was kept up until 1990, when privatization at the hospital consigned it to the dustbin of history.

Thauberger first became acquainted with the Akanda company and the Czech capital as a visiting professor at Prague’s Academy of Art. She wanted her students to do work in unconventional settings rather than in galleries and this led her to see the laundry space at Bohnice.

“The first time I saw it I said Marat/Sade needs to happen here,” she said. Just as she directed her students to work outside the obvious and conventional routes of the art world she is interested in taking works of art themselves into a different context.

“This production will be very different than if it were performed in a theater. It will bring a lot of different worlds together. It will draw people from my background in the world of contemporary art, also from the theater world and then the staff and patients of Bohnice.”

Written in 1963, the play is obviously meant to reflect the complicated and traumatic 20th century versions of political insanity. In fact, it is out of this particular insanity that the work has an even more far-reaching connection with Czech history.

Born in 1916 in Germany, Weiss was the son of a converted Hungarian Jew and so a citizen of Austria-Hungary. When the empire ceased to exist two years later he took on the citizenship of his father’s native town, which had since become part of Czechoslovakia. After Hitler’s rise to power, the 17-year-old Weiss was exempted from the obligatory Hitler salute at school as a Czechoslovak though he, still oblivious of his Jewish background, wanted to join in with his friends.

Eventually, the family’s Czechoslovak passports would come in handy when they escaped from Germany and settled in the Northern Bohemian town of Varnsdorf. This was the first time Weiss had ever been to what was technically his homeland. Weiss’ correspondence with the famous writer Herman Hesse helped him get a place as a student painter at Prague’s Art Academy until the Nazi takeover of the Sudetenland in 1938 caused the family to escape to Sweden, where Weiss would live the rest of his life.

Calling it ironic that one of Germany’s most famous writers and dramatists was never a German citizen doesn’t do justice to malign forces that prevented Weiss from living in the country he was born in.

Marat/Sade was first performed in West Berlin in 1964 and was launched to tremendous international acclaim the following year when director Peter Brook, who was celebrated in 2011’s Theatre World Brno, put on a London production of the play with the Royal Shakespeare Company starring acting legends such as Ian Richardson, Patrick Magee and Glenda Jackson. At the end of 1965 the production came to Broadway, where it ran for 145 performances. In 1967 Brook made a film of Marat/Sade with much of the same cast members.

The play continues to be the focus of political and artistic experimentation and controversy. A 2007 production at The Classical Theatre of Harlem boasted an all-male, all-black cast. The Royal Shakespeare Company’s 2011 revival accentuated the eroticism and horror of Weiss’ play and led to a backlash, with newspapers such as The Daily Mail characterizing the performance as “Utter filth and depravity.”

The current production will be primarily in English with Czech surtitles and Thauberger says that the language has proven to be difficult incorporating the Czech participants in the play.

“The play is very text-based but there is also a lot of physical acting, dancing and singing. There is a lot of emotion and satire, so it has been a challenge.”