Dagmar Hochová: an acrobat on the globe of life 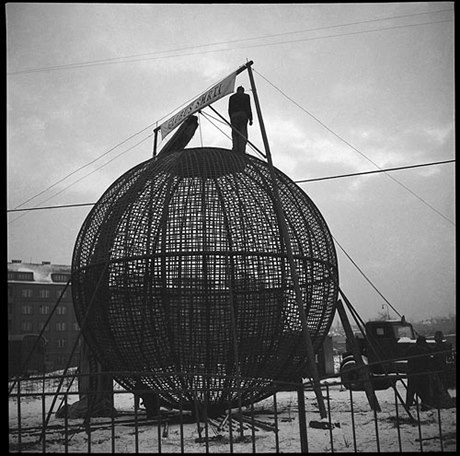 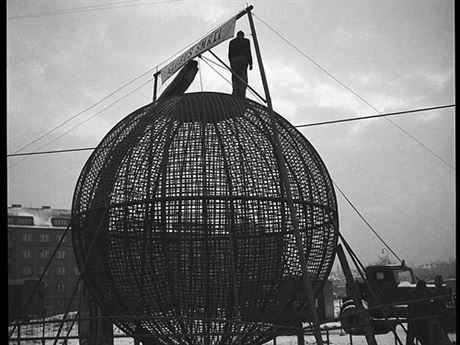 The photographer Dagmar Hochová might not be as well known to international audiences as other Czech masters, but the now 85-year-old has an impressive body of work that goes well beyond the reportage and magazine work that she is best famous for at home. Hochová’s latest retrospective opens up a window into her ties to surrealism and the way she applied it to documentary photography.

Pospěch says that in selecting the photographs to be exhibited at the Leica Gallery he wanted to avoid showing the same kind of work Hochová is best known for — what is typically referred to as humanistic photojournalism and whose most famous practitioner was French photographer Henri Cartier-Bresson. Instead, he highlighted the fact that Hochová was initially a student of the avant-garde photographer Jaromír Funke and friends with a generation of Czech surrealist artists who influenced her work in ways that often have not been adequately accounted for.

“Her documentary and portrait photography as well as insights she derived from the street corners were clearly given added spice and inspiration by the contact with the absurdity of the then socialist society,” Pospěch said.

Hochová initially worked as a freelance photographer for magazines such as Vlasta, Kulturní politika and Literární noviny. During the cultural repression of the 50s a lot of artistic talent was funneled into politically neutral design work for magazines and the quality level of much of the work is surprisingly high, significantly higher than what is found in some of the same magazines today.

While Hochová is known for her pictures of children the examples in the current exhibition veer away from more traditional documentary representation and show a more abstract, artistic leaning. There are a number of images of children playing in graffiti-scrawled urban corners, seen only from behind. The typical sentimentality of pictures of children is completely absent when you cannot even see their faces, yet there is an energy to the pictures that makes them look like stills from a French New Wave film.

Photographs from the Matthew’s Fair (Matějská pouť) also blend the documentary and surreal in images where the human figure is generally secondary to the colorful (though depicted in an atmospheric black and white) carnival backdrop. Most striking of all is the picture of the forlorn, skeletal Globe of Death attraction.

Born in 1926, Hochová and her generation of photographers and artists generally can be said to have suffered from a case of very bad timing. Unlike their predecessors, who had been able to participate in the currents of international modernism, they reached maturity during the war and spent their subsequent careers under a repressive communist regime that limited their artistic freedom and essentially cut them off from the West.

Pospěch places Hochová in the same generation as photographers Emila Medková, Miloň Novotný and even the slightly older Jindřich Marco.

The exhibition includes a series of Hochová’s portraits of some of her contemporaries, including of Emila Medková and her husband the painter Mikuláš Medek, as well as the surrealist poet and psychoanalyst Zbyněk Havlíček. There is a powerful image of the famous art historian Anna Fárová standing in her apartment gazing out the window along with a portrait of her painter husband Libor Fára, with his hand obscuring his face.

“Compared to subsequent generations, represented by Josef Koudelka and Markéta Luskačová or even the younger Viktor Kolář and Jindřich Štreit, it was a generation that was greatly impeded from having any contact with the Western world. The borders opened for them in 1989 at a moment for them when many were no longer living or had stopped their active working lives,” Pospěch said.

In spite of her isolation from the West, Hochová made ample use of access to the East, with photographs on display from her journeys to fellow communist countries. Again the images in the show display another thread than her standard documentary photographs. Her subtle pictures from a 1961 trip to Vietnam show the image of horses in a panel on a brick wall, while another photo shows a glimpse of a cemetery.

Most of all though the exhibition presents a powerful image of Prague and its inhabitants. Hochová focuses on specific places, such as the banks of the Vltava river where instead of seeing vistas with the Prague castle in the background you see a man washing his dog or a child’s silhouette with factory smokestacks looming in the background.

Then there are assorted images from the city streets — a man selling boots on a makeshift table, a mannequin in a wedding gown outside a storefront covered in scaffolding, people waiting for the tram or walking with a backdrop of Marxist-Leninist celebration. The atmospheric black and white photography combined with an abstract quality that emerges in many of these pictures makes them seem to come from a time even more remote they really do. Even the photos from the 80s appear positively ancient.

In the café that is part of the gallery it is possible to see a slide show of many other images not included in the actual exhibition.

Dagmar Hochová  The Acrobat on the Globe of Life
To January 8, 2012
Leica Gallery Prague,
Školská 28, Prague 1