Ahead of London trip to prepare for EU summit with ‘lone ally’ David Cameron, PM Petr Nečas gets cabinet okay not to sign fiscal pact 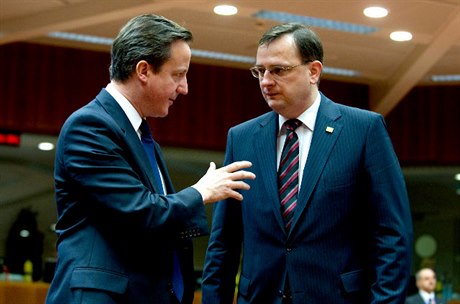 Czech prime minister Petr Nečas (right), seen here chatting with his British counterpart David Cameron, said ahead of the Dec. 8–9 summit in Brussels he did not believe that the Czech Republic would find itself isolated alongside Britain foto: (c)Council of the EU, Česká pozice 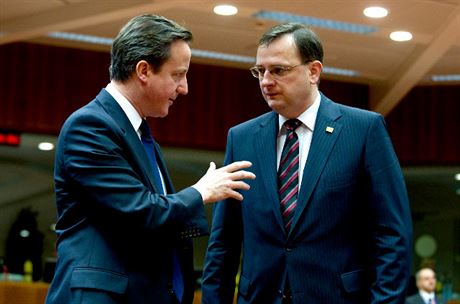 Prime Minister Petr Nečas (Civic Democrats, ODS) has been given a mandate not to sign the EU’s new budgetary discipline treaty at the two-day EU summit in Brussels starting on Thursday, he told reporters following a regular cabinet meeting.

While noting that all ministers present at Wednesday’s meeting had given him their blessing, Nečas admitted that the cabinet remains divided on the issue of EU budgetary and fiscal integration.

He again stressed that the Czech Republic could always on to sign the EU fiscal pact later. “No fatal or critical situation will arise whereby we would prevent other states from the steps they want to take, or that we would in some way isolate ourselves,” the prime minister told reporters.

Unanimous approval of his mandate at the EU summit was “very positive” as it signalled that the center-right coalition (ODS, Public Affairs (VV) and TOP 09) could reach a consensus, the ODS party chaiman said, ahead of leaving for London, where on Thursday he will meet UK Prime Minister David Cameron — who has also refused to sign the pact.

The Czech government said on its website the leaders would discuss include cooperation in the EU, “in particular on efforts to raise European competitiveness.”

In that regard, Nečas pointed out that he (and for that matter, Cameron) were among the 12 signatories of a Feb. 20 appeal to the European Commission and the European Council — called the Plan for Growth in Europe — calling for action to remove trade barriers remaining within the EU. The initiative was portrayed by some analysts as an attempt by the UK to deflect attention from its isolation on the EU fiscal pact.

“In this coalition, within which the Czech Republic is among the nations acting as a cognitive motor, we want to apply pressure on the European Commission to ensure that by June work starts on completing the single market,” Nečas said. “In this area the Czech government under my leadership is a strong pro-integration element.”

The initiative was portrayed by some analysts as an attempt by the UK to deflect attention from its isolation on the issue of the budgetary and financial discipline agreement, which along with the Czech Republic is the only EU member state that has not committed to signing the fiscal pact.

Apart from the Czech Republic and the UK, the other 10 signatories of the petition, sent to European Commission head José Manuel Baroso and EU Council president Herman Van Rompuy, are Estonia, Finland, Ireland, Italy, Latvia, the Netherlands, Poland, Slovakia, Sweden, and Spain.

In their appeal, the 12 leaders claim that removing outstanding trade barriers is prerequisite for boosting the EU’s competitiveness.  “We …. call on the Commission to fulfill its obligation under the services directive to report comprehensively on efforts to open up services markets and to make recommendations for additional measures, if necessary in legislation, to fulfill the internal market in services,” the letter reads.

Nečas said Wednesday that 60 percent of the services sector in the EU remains un-liberalized and thus outside the single market.

In the Plan for Growth in Europe petition, the 12 leaders also call for the creation of a single EU energy market by 2014, a single EU digital market by 2015 with harmonized regulations for online payments, use of copyright and other unified rules.

“Implicit guarantees to always rescue banks, which distort the single market, should be reduced. Banks, not taxpayers, should be responsible for bearing the costs of the risks they take,” they state.