Over 90 percent of Czech people see government corruption as a big problem; less than half  fully expect something to be done about it 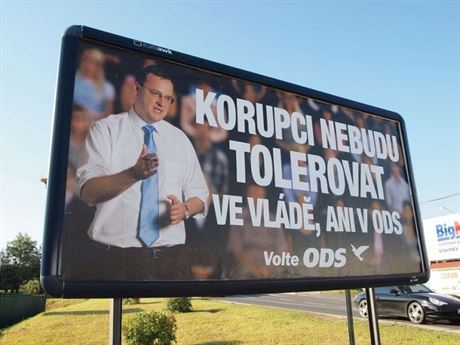 Anti-corruption measures announced by the government of Prime Minister Petr Nečas (Civic Democrats, ODS) have the support of almost three out of four Czechs, and even more see state and local corruption as problem that needs to be resolved — immediately. The most urgent problem is in public procurement, according to a poll by the Center for Analysis and Empirical Studies (SANEP).

While reforms to fight corruption were widely backed, no other type of reform — such as pension or health care reform — was seen as a priority.

A full majority of respondents —50.5 percent — said that the announced reforms should be adopted in their entirety, while another 23.9 percent voiced qualified support. Only 6.9 percent said that they should not be adopted.

When asked whether corruption at the state and local level was a serious problem that needed to be resolved “immediately,” some 80.5 percent of respondents said “yes,” with an additional 11.4 percent saying “rather yes,” for a total of 91.9 percent. A total of 2 percent felt it was not a problem. “This outcome unequivocally shows the great concern that society has about the question of corruption in state apparatuses,” SANEP said.

Most of the public didn’t want to pick out one area that needed to be addressed the most. Some 52.5 percent of respondents said that all of the areas in the anti-corruption strategy were equally important. For those who did distinguish, 28.4 percent named public procurement, while court and prosecution was cited by 5 percent, public administration by 3.2 percent, legislation by 2 percent and police by 1.8 percent.

“The biggest critic of corruption among public officials is the junior coalition party Public Affairs, which is headed by Interior Minister Radek John, who submitted the government’s anti-corruption strategy,” the SANEP report stated.

The Public Affairs party was also instrumental in the appointment of new Police President Petr Lessy, who plans to increase accountability of high-ranking police officers, increase police responsiveness to the citizens and further the fight against corruption. He also wants to simplify the police management, prevent information leaks and redefine policing standards.

“The objectives of the new police president are supported by more than four-fifths of the general public,” SANEP said. Some 56.6 percent said they agreed with police reforms, and 28.4 percent rather agreed. Altogether, 2.6 percent opposed the idea of reforming the police.

As for the other reforms that the current government is working on, just over one quarter — 27.8 percent — said that all of them should be seen as priorities. Pension reform was cited by 17.9 percent, health care reform by 15.3 percent, social reform by 9.7 percent, education reform 6.5 percent and tax reform by 4.1 percent.

The poll took place Feb. 17–20, 2011, with 7,549 respondents and results were corrected for population distribution. The statistical error was 1.5 percent, according to SANEP.