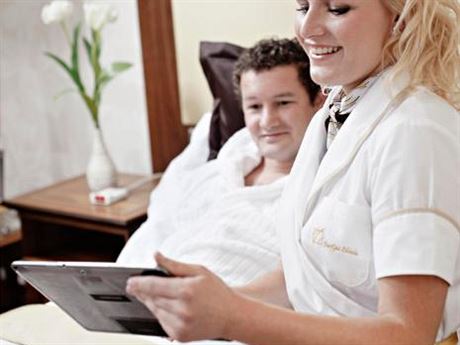 Medical tourism has been identified as a booming and lucrative market that the Czechs can plug into | foto: © Royal Medical, Česká pozice

Tourism promotion agency CzechTourism has launched Internet campaigns in around half a dozen countries aimed at plugging into the ever growing market for so-called “surgical stays.”

Internet campaigns targeting Britain, Russia and other post-Soviet states, Germany, Switzerland, and several rich Arab countries are vaunting the country’s reputation for high quality and cheap surgical and healthcare treatment with the aim of attracting more medical tourists to the country.

“Most of the interest at the moment is for various types of plastic surgery,” said the state agency manager in charge of the campaign, Iveta Jakoubková, adding that obesity treatment was also popular.

‘Most of the interest at the moment is for various types of plastic surgery.’

The latest advertising initiative follows on from the publication last year of the first comprehensive catalogue of surgical and health treatments offered here, the “Medical Tourism Guide Czech Republic,” in English, German, and Russian versions.

Tens of thousands of foreigners are already attracted to the Czech Republic for various types of operations, including fertility treatments, eye operations, dental treatments, and simple surgery.

Jakoubková said no statistics are kept on the number of visits to the country for various medical or cosmetic treatments offered by specialized clinics or in some of the country’s biggest hospitals, but there is a clear impression that interest in the country is rising in what is identified as a booming market.

Estimates put the cost of various health and cosmetic treatments in the Czech Republic at around a third or quarter of what they would cost in foreigners’ home countries.

Jakoubková could not say whether demand for breast implants, a popular Czech treatment in the past, had plummeted following the scandal over faulty implants produced by a French company.

A study by international consultancy company Deloitte estimated that the world market for health tourism was worth around $60 billion in 2008 and $100 billion in 2010 with an estimated annual growth of 30-40 percent a year.