Hundreds of Czechs protested a government move to raise the VAT rate on books, saying it will bring little revenue at a high final cost 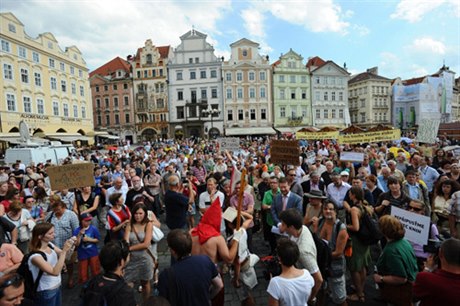 Protesters mixed with bemused tourists as Czechs demanded a proposal for an unprecedented hike in VAT be scrapped foto: © ČTK, Česká pozice 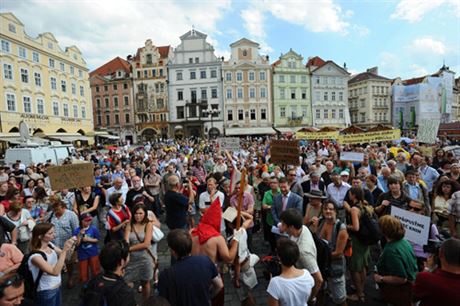 Hundreds of Czechs packed Prague’s historic Old Town Square on Wednesday to protest against the coalition government’s plans to hike value-added Tax (VAT) on books from the current 10 percent to 17.5 percent.

Bearing banners such as “With [Miroslav] Kalousek to join the barbarians,” referring to the country’s finance minister, and “Education is the opium of the people,” the crowd of more than 1,000 protesters heard calls for members of Parliament to lead a revolt against the proposal.

So far, around 160,000 Czechs have signed a petition against the VAT hike, the highest total for any petition since 1998, according to organizers. Publishers said the move will cut the number of books printed annually by around one third, or 5,000 to 6,000, and result in the loss of around 2,000 jobs. Specialized books and exercise books will be worst affected, they said. ‘This is a bad trade-off for the future of our country.’

In a country already criticized in an Organization for Economic Cooperation and Development (OECD) report for the below average reading skills of its schoolchildren, this could have a disastrous effect, the Association of Czech Booksellers and Publishers (SČKN) warned. “This is a bad trade-off for the future of our country,” said Jiří Seidl, the head of the SČKN section devoted to booksellers.

The association estimates that the higher VAT rate will bring the Ministry of Finance only around Kč 200 million a year in extra revenue. If the change goes ahead, they say the Czech Republic, will rank among European countries with the highest tax rate for books, only exceeded by Denmark and Bulgaria where the VAT rate is 20 percent.

The average VAT rate on books within developed European countries is 5 to 6 percent with some countries, such as the United Kingdom and Ireland having a zero rate. “These countries believe that this is an investment that pays back many times for the state,” Seidl said. ‘It is a funny thing, but all the parties came up with the same excuse.’

The proposal to increase VAT on books is part of the center-right government’s tax reform measures, which count on raising the lower tax rate from 10 percent to 14 percent in 2012 and to 17.5 percent in 2013.

The proposal on VAT already passed its first reading in the Chamber of Deputies, Parliament’s lower house, but must still go through two further readings. “We hope that when members of Parliament are better acquainted with the issue they will vote against it. That is our main hope,” SČKN chairman Vladimír Pistorius told Czech Position.

Members of Parliament from the three coalition parties — the Civic Democrats (ODS), TOP 09 and Public Affairs (VV) — were sympathetic to the idea of giving an exemption from the higher tax for books but feared that it they pushed for such a move their government partners would push for concessions elsewhere, Pistorius said. “It is a funny thing, but all the parties came up with the same excuse,” he said. “The only reason for these preparations to massacre Czech books is the inability of individual parties to agree on exemptions to a single tax rate,” the association said in a statement.

European countries that have chosen to impose sales taxes of around 20 percent on books include Bulgaria, Albania, Ukraine and Belarus. These will be the models that the government has chosen for Czechs if the government doesn’t turn over a new page on this proposal, the SČKN said.