Josef Škvorecký, the prolific novelist, poet and 68 Publishers co-founder, was awarded the Order of the White Lion by Václav Havel 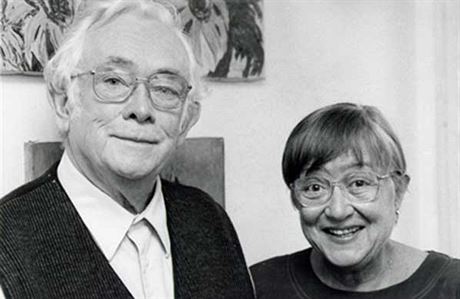 Josef Škvorecký and his wife, Zdena Salivarová, published and sent books to Czechoslovakia and other countries behind the Iron Curtain free of charge. He invested part of his salary as a university teacher into the publishing house and edited most of the | foto: © skvorecky.net, Česká pozice

Josef Škvorecký, a former Czech dissident writer who spent much of his adult life in Canada but continued to support fellow authors back in Czechoslovakia, died in Toronto early on Tuesday morning of cancer at the age of 87.

Along with his wife, actress and fellow émigré writer Zdena Salivarová, he founded the legendary 68 Publishers group (Sixty-Eight Publishers, Corp.) a few years after the Warsaw Pact invasion of Czechoslovakia that brought an end to what came to be known as the Prague Spring.

Škvorecký was a prolific novelist and poet, whose fiction — banned by the Communists in his homeland — examined the horrors of totalitarianism and repression at the hands of the state, the expatriate experience and jazz.

He spent two years as a slave laborer in a German aircraft factory during the Second World War, and, after briefly studying medicine at Charles University, switched to the Prague institution’s faculty of arts, from which he received his Ph.D. in philosophy in 1951.

During the 1950s, he worked briefly as a teacher, editor and translator while looking to find a publisher for his first two novels —The End of the Nylon Age and one of his most famous works, The Cowards, which was written in 1948/1949. Both were banned by Communist censors after being published.

After leaving Czechoslovakia for Canada in early 1969, he continued to write while running 68 Publishers on a shoe-string budget; from 1971 to 1990, the imprint became an important outlet for dissident writers like Milan Kundera  and Václav Havel — who, after becoming Czechoslovakia’s first post-communist president, in 1990 awarded Škvorecký the Order of the White Lion.

In 1992, he was made a Member of the Order of Canada — in his adopted country, he is widely considered to be a Canadian author although he mostly published in Czech — and in 1996 was awarded France’s Chevalier de l'Ordre des Arts et des Lettres 1996.

Apart from writing and publishing, Škvorecký taught at the Department of English at the University of Toronto where he was eventually appointed Professor Emeritus of English and Film. He retired in 1990. (In Canada, he is considered to be a Canadian author despite the fact that he is still mostly publishing in Czech.)

Besides the books that Škvorecký and Salivarová published themselves, they also reprinted prose works of other Czech émigré writers – such as Egon Hostovský, Jiří Gruša, Arnošt Lustig, Ferdinand Peroutka and Viktor Fischl.

Škvorecký invested part of his salary as a university teacher into the publishing house. He also edited most of the books – although in the imprint he is sometimes listed under pseudonyms referred to his literary characters (such as Josef Borůvka, Lenka Stříbrná and Daniel Smiřický). His wife typeset and packaged the books and handled the orders.

In May 1989 Milan Kundera — whose novel  The Unbearable Lightness of Being was first published in Czech by Škvorecký and Salivarová — wrote of Sixty-Eight Publishers:

For almost twenty years Zdena Salivarová and Josef Škvorecký , alone, working with a keen and youthful spirit under trying conditions that seem unreal to professional editors, have allowed us to remain writers in the sense that the European modern age understands: as authors of books. If we realize what it cost them in time, work, effort, exhaustion, we will understand that those two have, in addition to all the ways they served the Czechs, have also set a precedent unique in history: sacrificing a part of their own work for the work of their colleagues.

To Czechoslovakia and other countries behind the Iron Curtain, the couple sent the books free of charge. Reading and owning them was punishable by law, so the books were smuggled through in various ways – concealed and hidden in the luggage of travellers allowed by the Communist authorities to go to the West, disguised in dust jackets from detective novels and slipped into boxes of washing powder, the Czech daily Lidové noviný noted in a profile of the publishing house in December.

Most people who got books from the Škvoreckýs still recall who brought it to them, how much time they had to read it, which of the books they copied and which were confiscated in a search of their homes by the StB (Czechoslovakia’s State Security Police), the newspaper said.

“Till this day I remember the feel of the books, how wonderfully they slipped into your pocket, and how pages fell out of them in frantic, all-night reading marathons,” the writer Jáchym Topol told Lidové noviný; the Director of the Libri Prohibiti library, Jiří Gruntorád, who was sentenced to four years for “subversion of the state” in 1980, said that for him, books from Sixty-Eight Publishers were “bandages on open wounds.”