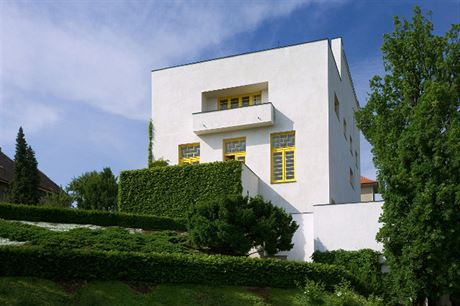 A Czech/Austrian architect is getting the kind of high-profile exhibit that should help solidify his rightful place among 20th Century modernist masters. The Adolf Loos Season at the Royal Institute of British Architecture (RIBA) runs until May 3. Given that Loos was a Brno-born Austrian, it is fitting that the exhibit is backed by a Czech-Austrian partnership.

On March 2, a Prague presentation of the exhibit was given at one of Loos’ masterpieces, the Villa Müller in Střešovice by the villa’s curator Maria Szadkowska and the director of the Czech Centre in London Ladislav Pflimpfl.

“I believe that the impact of the exhibition is so great because what it is saying is that, with the modernist icons Le Corbusier and Mies van der Rohe, there was another architect who was just as influential and inventive as them but was less fortunate in terms of where the buildings were built,” Pflimpfl told Czech Position.

While Loos’ most famous buildings are in Vienna the main part of the current exhibition centers on his Czech projects. Titled “Learning to Dwell: Adolf Loos in the Czech Lands,” it includes a presentation of the interiors of the Villa Müller along with other apartments and interiors that exemplified the architect’s notion of an ideal living space.

Other buildings and plans by Loos in Europe and America are being exhibited as well, including a design for a house in Paris for legendary Jazz-age singer Josephine Baker that was never built. The stress on interior design means that examples of furniture and other design items from the man who famously said that “Ornament is crime” are also on display.

Work to set up the exhibition began in September 2009, and RIBA was approached as being the ideal partner and venue to display Loos’ work due to its prominence and its having over 40,000 members. Getting the space for such a large-scale exhibit is not always so easy, but Pflimpfl said that there was a Czech connection involved that facilitated the whole process.

“We were very lucky because the head of the British Architectural Library is a Czech-born architectural historian, Irena Murray-Zantovska, and she was a big help for us because she is a specialist who knows an incredible amount about modernist architecture,” he said.

The fact that co-curator Murray-Zantovska is the sister of current Czech Ambassador to the UK, Michael Žantovský, might have helped as well though perhaps much more significant is the British library’s massive archive of Loos material that was saved from destruction by RIBA during World War II. The archive has never before been exhibited in public though there have long been plans to find an occasion to present it.

The season is further supplemented by a RIBA exhibition blog as well as a picture archive. Pflimpfl said that there are expectations that the exhibit will further the impact of Loos’ work on British architecture. On March 2 British architectural students came to draw selected items from the show.

“It’s not a new name but we are reinventing the idea of Loos of being an important architect in the history of modernist architecture,” Pflimpfl said.