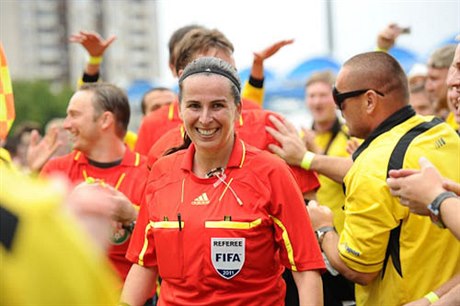 Damková after a match between Mladá Boleslav and Slovácko — her last with the Gambrinus league foto: ©ČTK, Česká pozice 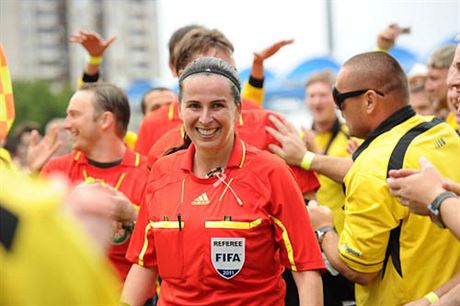 A Czech woman who had blazed a pioneering trail through the masculine world of football has been given responsibility for the country’s whistle-blowing referees nationwide.

Former top referee Dagmar Damková has been appointed to head the country’s national referee’s commission in a surprise move announced by the national football association’s executive committee on Monday.

The committee cleared out the current members of the commission and tasked Damková with picking her own team to staff the future commission, the Football Association of the Czech Republic (FAČR) said in a statement.

The executive committee did not explain the full reason for the red card being given to current commission members but said Damková’s new post was logical following her appointment to the UEFA referees’ commission.

She became the first woman appointed to the referees’ commission of European football’s governing body UEFA in July. The honor followed a pioneering path in Czech football for the 36-year-old woman. She was the first female official to referee a Czech men’s top-flight soccer league game in 2003.

“When Dagmar Damková is selected for the UEFA referees’ committee, what’s more as a woman, the time has come for such changes. It is the practice in most countries that a high official in UEFA heads the relevant commission at home,” the deputy chairman of the executive committee, Jindřich Rajchl, explained, according to the web site of Czech commercial broadcaster TV Nova.

Rajchl added that the move had nothing to do with the pre-election contest, a reference to the ongoing contest to head the Czech football association following the shock resignation of former association head Ivan Hašek at the end of June.

Hašek, brought in to clean up and shake up the much criticized association, said he had always counted on doing the job two years and said he was returning to the United Arab Emirates club Al-Ahli, which he left in 2009.

Stepping down to move up

Damková, who retired from refereeing top games in August, announced on Sept. 3 that she was no longer standing to be head of the Czech football association, on advice from European football’s governing body, UEFA.

‘A position on the prestigious international referees’ commission could not be combined with the highest post in the national association.’

“The reason was pretty simple. According to the opinion of people in UEFA, a position on the prestigious international referees’ commission could not be combined with the highest post in the national association,” she said, according to the FAČR statement.

“Because I want to work on UEFA’s referees’ commission, which so far none of us [Czechs] has done, I have decided to withdraw my candidacy to be the chairman of the football association,” Damková said.

The vote for the top job in Czech football takes place at a special meeting of the association in Prague on September 16.