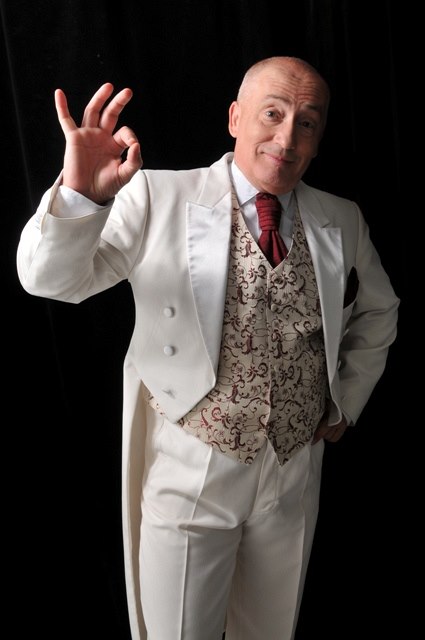 What to make of a holiday music festival that opens with Pink Floyd and closes with Bach, Mozart and Tchaikovsky? Even Miroslav Matějka, the director of České Doteky Hudby (Czech Touches of Music), is hard-pressed to offer a unifying theme or conceit.

“It’s very difficult,” he says, pondering the question with a puzzled look. Then he brightens and smiles. “I don’t like to specialize in a particular style – I like to offer music from every period. The festival must be open to all people, of all ages. It’s a progressive dramaturgy.”

That’s one way to describe the offerings at the 13th annual České Doteky Hudby, which kicks off on Dec. 16 with the Hradec Králové Philharmonic playing a program of “Pink Floyd Classics” at one of the most distinguished venues in the city, Spanish Hall at Prague Castle. The rest of the 14-concert schedule is in a more traditional vein, with the Prague Philharmonia, visiting orchestras from Zlín and Teplice, and a first-rate roster of local soloists and chamber groups playing a wide-ranging repertoire of classical favorites in venues throughout the city.

The Pink Floyd extravaganza is not as unlikely as it may seem. It started several years ago with Brno conductor Miloš Machek, who approached the Hradec Králové Philharmonic with the idea of staging an orchestral Pink Floyd program. This is not the kind of fare that appeals to orchestra manager Marcela Jakubská, but she is realistic about what it takes to keep a symphony orchestra in business. “We know that when we want to earn money, we have to do these kind of concerts,” she says. ‘The technicians tell me it will take 20 speakers to surround the audience properly with the sound.’

And Machek's idea proved to be a winner. When the orchestra toured the Pink Floyd program in Germany in 2010, all eight concerts sold out. So did four subsequent performances at the orchestra’s home hall in Hradec Králové, and two at Smetana's Litomysl festival this past summer.

A few months later, Jakubská was in Spanish Hall with her sound and light engineers, figuring out what it would take to do the production there — no easy task, as the performance includes a male vocal quartet, Q VOX, and electric guitar and saxophone players.

“The technicians tell me it will take 20 speakers to surround the audience properly with the sound,” she says. “And we can’t do the full light show, there isn’t enough room. But it’s an honor to play at Prague Castle, and we will be back later in the festival to show that we can perform quality classical music.”

Actually, there is plenty of quality classical music between the opening and closing concerts. In keeping with the holidays, the programming is not very ambitious, but it includes some tasty selections and outstanding performers.

A concert at Prague Castle’s Rudolf Gallery will focus on Mozart’s ties to the Freemasons, the well-known fraternal organization that he joined in 1784. He subsequently composed 10 Masonic Cantatas, which will be performed by the Antiquarius Consort Praga chamber ensemble and the Musica Divina Praga men’s choir. Also on the bill are Mozart’s Adagio and Rondo for violin, and one of the great works of Western music, Beethoven’s Symphony No. 3 (“Eroica”), in a special arrangement for string quartet (Dec. 18).

The Bohuslav Martinů Philharmonic Orchestra from Zlín is coming to Obecní dům for what is being billed as an homage to Gustav Mahler, though the only Mahler work on the program is the composer’s Symphony No. 1 (“Titan”). But the other pieces feature a great set of soloists: Violinist Jaroslav Šonský and pianist Sylvaine Wiart will perform Mendelssohn-Bartholdy's Concerto in D for violin, piano and orchestra, and local viola star Jitka Hosprová is taking the solo honors on Martinů's Rhapsody-Concerto for viola and orchestra (Dec. 19).

Two orchestra concerts in the first week of the new year will introduce Prague audiences to Gudni Emilsson, an Iceland-born conductor who has won an armful of awards working stages from Stuttgart to Bangkok. At Obecní dům, he will be leading the North Czech Philharmonic Orchestra from Teplice in a program of “Russian Music Jewels” that includes familiar works by Glinka, Rimsky-Korsakov, Prokofiev and Tchaikovsky (Jan. 2). And local organ star Aleš Bárta will join Emilsson and the Prague Philharmonia at the Rudolfinum for a program of Schubert, Händel and Dvořák's Symphony No. 9 (“From the New World”) (Jan. 3).

There are several concerts at the Mirror Chapel in the Klementinum, a resplendent setting for chamber music. The best one features the Smetana Trio, arguably the finest piano trio in the country. They will be performing a sophisticated program of Schumann, Brahms and one of their signature pieces, Dvořák's Dumky (Dec. 20). Also worth seeing is the Wihan Quartet, who will be at the Mirror Chapel for a hangover special of Dvořák's String Quartet No, 12 (“American”), Paganini Caprices and a selection of Beatles covers (Jan. 1).

Baroque fans will find two sweet concerts at Suk Hall in the Rudolfinum. Tomáš Hanák's Pavel Haas Chamber Orchestra is presenting a program of Christmas nocturnes and serenades that includes pieces by Marcello, Vivaldi and Mozart (Dec. 27). And the Vivaldi Orchestra Praga will be serving up an all-star evening of Händel's Music for the Royal Fireworks, Bach's Non sa che sia dolore cantata and Vivaldi's Four Seasons (Jan. 2).

Finally, the Hradec Králové Philharmonic gets a chance to redeem itself with a concert at Obecní dům on the festival’s traditional closing date, the Feast of the Three Kings (Jan. 6). Ondřej Kukal, the orchestra’s principal conductor, will be at the podium for a program ranging from Bach to Tchaikovsky, with a very good set of soloists including the country’s best harp player, Kateřina Englichová, and Spanish flute player Claudi Arimany, whom Jean-Pierre Rampal called “one of the greatest flautists of his generation.”

That would seem to be more appropriate fare for the Castle, where President Václav Klaus' wife Livia holds sway over the classical music programming. But if the President can throw jazz concerts in Spanish Hall, why not an occasional rock 'n' roll party? Still, one has to ask: Does Livia Klaus like Pink Floyd? “I don't know,” Matějka says. “But she didn’t object.”