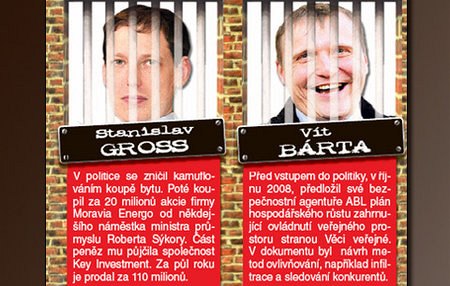 A week after Czech PM Petr Nečas was derided for claiming his government has done more to fight corruption in its 18 months in power than was done in the previous 10 years, the tabloid Blesk on Thursday launched an online petition calling upon the police and judiciary services to thoroughly investigate corruption scandals — and published a list of “top 20” most-corrupt politicans and businessmen.

Blesk, which has nearly twice the readership of the leading broadsheet Mláda fronta Dnes, said it had polled 50,000 people asking them who they thought were the greatest scoundrels among Czech politicians and lobbyists whom the police and public prosecution have yet to bring to justice. Without giving poll figures, the tabloid said former Social Democrat (ČSSD) prime minister Stanislav Gross is “indisputably the king of corruption in the eyes of the Czech people.”

‘If just one of them were incriminated it would cause a domino effect, because those who rule the Czech Republic hold each other by the neck’ The article paints a concise and grim picture of the extent and basic structure of corruption in Czech politics. “The police, the state prosecution service, and the courts: corrupt politicians, businessmen and lobbyists have their people everywhere there [in those organs] covering their backs. They have managed to create a perfect mafia environment for their nefarious practices. They can do almost as they like and get away with it without punishment,” Blesk writes.

The tabloid symbolically placed the 20 politicians who ranked in their poll behind bars in a series of photomontages with short summaries of the most prominent unresolved scandals in which they have been implicated. Those who ranked in the poll are:

According to Blesk, many of the figures above should be remanded in custody while the allegations against them are thoroughly investigated.

In a recent STEM poll, 93% of respondents said they consider corruption to be a serious problem The daily says that a major part of the problem of corruption in Czech politics is the principle of mutual incrimination: “If just one of them were incriminated it would cause a domino effect, because those who rule the Czech Republic hold each other by the neck. Everybody has something on everybody else, and each of them is bound to someone for something. And the police are also involved in this circle,” the daily writes.

Blesk calls upon its readers to sign an online petition calling on the police to and judicial authorities to investigate the prominent cases of suspected corruption:

“We demand the police and judiciary to not let themselves be influenced by the powerful in this country and to diligently investigate the corruption scandals which poke us in the eye and insult our sense for rights and justice,” Blesk appeals to its readers.

With the article and petition, the tabloid is clearly catering to growing public discontent with domestic politics and corruption scandals.