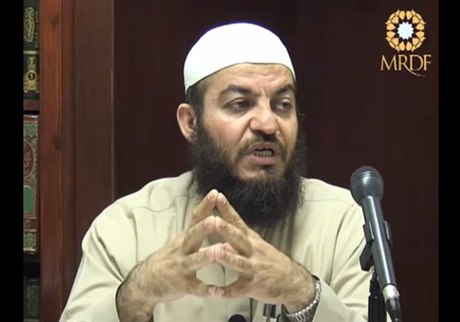 London-based cleric Haitham Al-Haddad is a member of the pan-global Sunni organization Hizb ut-Tahrir, which aims to establish a caliphate, i.e. one government of Sharia Law for all Muslims everywhere foto: ©MRDF, Česká pozice 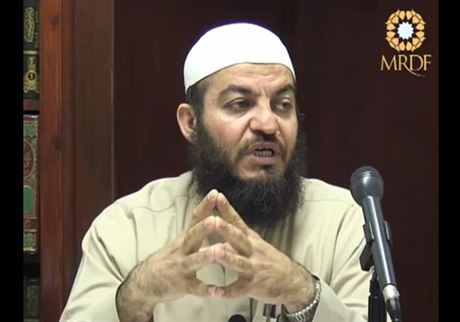 London-based radical Muslim cleric Haitham Al-Haddad — who sits on the UK’s Islamic Sharia Council, advocates a ban on music, refers to Christians and Jews as “accursed nations,” and calls for Jihad against Israel — is reportedly due to arrive in the Czech Republic on Friday to preach at a mosque and Muslim center in Prague.

Czech moderate Muslim and blogger Lukáš Lhoťan has called upon the authorities to take measures to prevent the cleric from entering the country. “I’m convinced that the planned visit of this religious extremist to the Czech Republic could lead to the radicalization of the Muslim community, strengthen intolerant trends within Czech Islam, and lead to the violation of several laws,” he wrote in a letter he sent to the state prosecution service on Monday and published on the eurabia.cz website on Tuesday.

“Therefore, there’s a possibility that the law on undesirable persons and other regulations of international and European law regarding the movement of persons could be applied,” Lhoťan said. “I therefore request the state prosecution service and the Czech Police where possible to take such measures to prevent him from entering the Czech Republic.”

Lhoťan, who describes himself as a moderate Muslim, recently published a book titled Islam and Islamism in the Czech Republic in which he documents the growth and development of the community here since the end of the communist regime in 1989. In the book he warns that the Czech authorities are not aware of the extent of the spread of radical Islam, which he insists is “Islamism” not genuine Islam.

If Haitham Al-Haddad is granted entry into the country, as expected, he will be under surveillance: Czech anti-terrorism police say monitoring the activities of such people is part of their work. Police Presidium spokeswoman Pavla Kopecká told the news server prvnizpravy.cz that appropriate units would closely follow the visit. “However, we cannot criminalize anyone before they commit a crime,” she added.

Pavel Hanták, spokesman for the anti-organized crime unit (ÚOOZ), which is also responsible for counter-terrorism operations, refused to comment on the visit of Haitham Al-Haddad specifically, though he told Czech Position that the unit “pays very close attention to extremist activities” and is in 24-hour contact with international counterpart organizations through the National Contact Point for Terrorism (NKBT).

Hanták also declined to say whether ÚOOZ  had received any information from counterpart organizations in the UK about a planned visit by a radical Muslim cleric from the UK.

Al-Haddad is a member of the pan-global Sunni organization Hizb ut-Tahrir, which aims to establish a caliphate, i.e. one government of Sharia Law for all Muslims everywhere. Tony Blair’s government moved to ban Hizb ut-Tahrir in the UK following the bomb attacks on London in 2005, but according to the UK daily The Independent reneged after police and civil groups warned a ban could serve to further radicalize the group and prompt activists to resort to violence. Hizb ut-Tahrir is banned in Germany and Russia.

Al-Haddad preaches loyalty to Islam, not one’s country, and calls for Jihad against Israel: “We should pay the price for this victory [over Israel] from our blood,” he says in a lecture published on the Internet. He preaches fundamental interpretations of Islam including defending the right of a husband to beat his wife, the indisputable duty of women to conceal their faces and figures by wearing a burqa, and claims that music is a non-Islamic and corruptive phenomenon.