The best in Czech photography is on display, covering everything from world events to sports, nature and a peek inside a Chinese IKEA 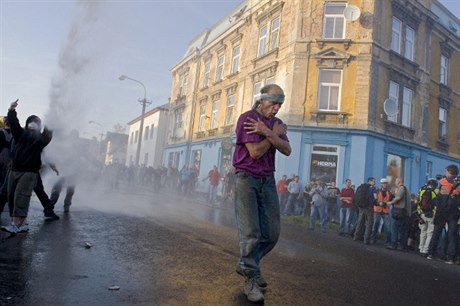 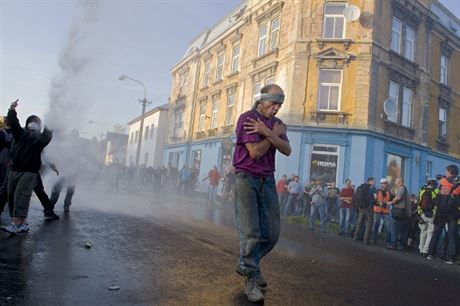 On Nov. 15 the Czech Press Photo award ceremony took place at Prague’s Old Town Hall. Mayor Bohuslav Svoboda presented the Crystal Eye award for Photograph of the Year to Stanislav Krupař for an image from his documentation of the race riots in Northern Bohemia. While the exhibition contains many typical news photographs, there are a number of stunning images that make it worth a visit.

Since Czech Press Photo begins with the News categories (Spot News, General News and People in the News) the viewer is immediately subject to an experience not unlike watching commercial TV evening news. First, there is a heavy dose of violence and misery, followed perhaps by a natural disaster or two before getting the latest on your favorite celebrities.

This year’s exhibition follows this pattern to a tee. Spot News consists of the Neo-Nazi anti-Roma riots in Varnsdorf, street demonstrations in Egypt and mourning following the Norweigian massacre. General News is almost entirely taken up with environmental catastrophe – toxic mud in Hungary, a Japanese Tsunami and life in Haitian camps after the earthquake. The sole exception is an image that received honourable mention of a shirtless man done up as an angel for the Prague Pride parade.

These categories offer the occassional eye-catching photograph, yet for the most part they rely on the event or the subject of the picture for their effect. One exception is the winning photo from the People in the News category, which catches an obviously nervous Václav Havel sneaking a peek from backstage at the premiere of his film “Leaving.”

Not the same old housing estates

Roman Vondrouš won the prestigous Grant of Prague Czech Press Photo 2010 for his project “Fragments of Metropolis,” and an exhibition of his work takes up the whole of the Old Town Hall’s medieval cellar space, with photographs from Prague housing estates. Not usually described as picturesque by any means, Vondrouš said at the press conference that these places have changed radically.

The Grant of Prague is a one-year creative scholarship to photograph changes in the city. Vondrouš’s pictures are vivid images offerring a diametrically opposed perspective to the traditional view of communist-era housing estates as gray, lifeless slabs of concrete.

“My aim was to not only to document the architecture of the estates but also to bring non-traditional views on fragments of the city and situations that are very different from the ordinary perspective most Prague people perceive daily. To show that Prague, and above all its housing estates, are not just gray uniform structures anymore, but that possibilities are opening for a dialogue between architecture, people’s lifestyles and their aesthetic needs,” Vondrouš writes in the documentation accompanying his work.

Portraits at an exhibition

A category with even more mixed results is that of Portraits. The top prize went to the strong work of Petr Toman, who photographed men who liquidated the debris from the Chernobyl nuclear reactor and are now living with the consequences of the radiation exposure they suffered. Toman walks a fine line between making artistically beautiful images and emphasizing the men’s (and one woman’s) painful conditions, though he does this subtly.

The other portraits on display deserving mention are Martin Wágner’s fascinating series of Red Army veterans who had served in Czechoslovakia. One photo arose from a chance encounter at a Russian train station where Wágner spotted a man with a Czech lion insignia tattoed on his upper arm, something which the ex-soldier told him was common among Russian troops stationed here in the ’70s.

Another evocative portrait set is Alžběta Jungrová’s Blue Light Tonite, in which a number of well-known Czech personalities such as Foreign Minister Karel Schwarzenberg (TOP 09) are shown in the murky atmosphere of Prague’s Blue Light bar.

The winners of the 2011 Grant of Prague are documentary photographers Alena Dvořáková and Viktor Fischer for their project “Prague – City and Water,” in which they show the role of water in the city’s inhabitants’ lives through arresting black and white images.

Dvořáková and Fischer were also first place winners in possibly the strongest category in the exhibition — Everyday Life. Their project documented spiritual services in Czech prisons, with images of forbidding prisons and tattood inmates together with a scene of prisoners at a church service and a powerful photo of a prisoner lying on the grass embracing his young daughter on a visit.

The other prize winners in the Everyday Life category had equally impressive work. Martin Wágner and Jan Vermouzek took pictures in the Russian town of Vorkuta. Built on the site of one of the most notorious Soviet Gulags, their photographs document a bleak, haunted city with a rapidly dwindling population.

Milan Jaroš explores the other end of the spectrum of rising and falling civic fortunes, and what better place for that than an IKEA in China? Jaroš’s photographs of generally exhausted Chinese shoppers collapsing into the available chairs, couches and beds makes for a compelling metaphor of the effect of China’s consumer boom.