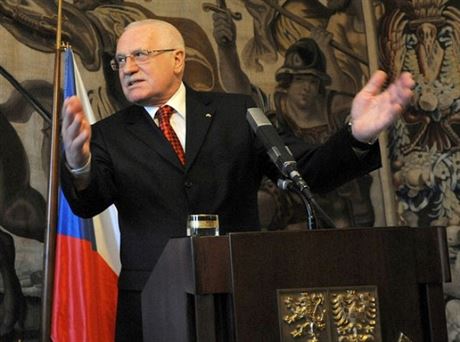 The Czech president has rejected an appeal to grant clemency to prankster artist known as Roman Týc, now serving the second week of a 30-day prison sentence for changing glass on pedestrian crossings on traffic lights across Prague. The appeal to free the Ztohoven artist came from the arts and culture portal protisedi.cz (meaning “against the gray”).

“I have been trusted to inform you that the President of the Republic, Václav Klaus, personally viewed the appeal for clemency. After careful consideration, the President did not find sufficient reasons to grant clemency,” presidential aide Jiří Weigl explained in a letter to protisedi.cz.

Further, Weigl said that in granting pardons Klaus does not asses or reject verdicts delivered by judges, “he simply takes into account important circumstances which in individual cases may not be taken into account in the legally prescribed options available to judges.” ‘After careful consideration, the President did not find sufficient reasons to grant clemency.’

Týc, from the provocative and celebrated art group Ztohoven, was jailed after refusing to pay a Kč 60,000 fine for changing the images on the crossing lights. He did not accept that his act was a criminal offense, calling it a form of artistic expression. He did, however, pay the damages.

Klaus’ refusal to grant clemency to Týc (whose real name is David Hons) again raises questions about how he exercises his power to pardon. During his time as president, Klaus has pardoned a number of people convicted of serious corruption and fraud charges.

Most recently, on Valentine’s Day his administration announced the pardon of 14 people including former Metropolitan University Prague (MUP) director Anna Benešová, who was handed a four-year suspended sentence for embezzlement and offering bribes. Evidence surfaced shortly after the announcement of Klaus’ pardon that his wife, Livia, had close ties to Benešová, though the president denied having known about the relationship.

The 15th name on Klaus’ Valentine’s clemency list is Tomáš Malina, who was found guilty of theft of oil worth Kč 100 million from the refiner Unipetrol. Prague Castle officially classified Malina’s pardon as “provisional.”