Coalition gov’t has fulfilled almost half of its anti-corruption program, saved tens of billions of crowns, say N?čas and Peake 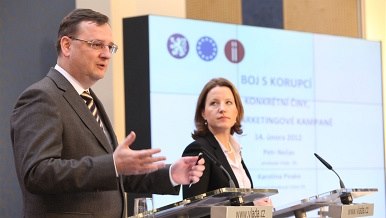 Prime Minister Petr Nečas (Civic Democrats, ODS) on Tuesday described his center-right coalition government’s campaign against corruption as a “unprecedenced” in scope while stressing that the results of the “long-distance run” may not yet be apparent to most of the wider public.

“A comparison with the past shows unequivocally that the current government has advanced much further in this area than previous governments,” Nečas told a joint news conference with Karolína Peake (Public Affairs, VV), a deputy prime minister who heads the government’s anti-corruption commission formed late last summer.

Measures implemented by the government since it came to power in July 2010 have already resulted in savings of “tens of billions” of crowns, Nečas said. To back his claim, he cited a 10 percent cut in running costs of ministries, which he said should have reduced “room for corruption by at least 5 percent”; a move to cut out intermediaries from acquisitions by the Ministry of Defense (which should save “billions”); and the cancellation of a new ward and hotel at the Central Military Hospital (ÚVM) in Prague 6, which he said has saved Czech taxpayers Kč 6 billion.

Nečas said that despite the uncertain economic situation, the total value of public tenders still amounts to around Kč 450 billion annuallyBoth Nečas and Peake stressed the significance of the amended Law on Public Procurement, signed by President Václav Klaus on Tuesday, which obliges state bodies to publish more details about all public contracts, lowers the financial limit under which there is no obligation to call a tender, automatically cancels a tender that attracted only one bidder, and bans holding the controversial electronic lotteries to reduce the number of bidders, or select winners of tenders.

According to the government’s figures, public tenders account for around 14.5 percent of gross domestic product (GDP). Nečas said that despite the uncertain economic situation, the total value of public tenders still amounts to around Kč 450 billion annually. As such, eliminately corruption in the process is of paramount importance, he said, adding, “The law will radically reduce the room for tailoring tenders for a chosen bidder.”

Peake stressed that the extent of the government’s initiatives to fight corruption are not evident because hitherto much of the work has been on drafting legislation. “It’s important to realize that in the first year [of the government’s mandate] analyses and materials for actual laws were prepared. Now this year much faster passing of laws and other legislative measures awaits us,” she said.

To date, 40 measures from the 84 contained in the government’s anti-corruption program endorsed by the three coalition partners (ODS, VV and Top 09) have been presented to the Cabinet, said Peake, whose party, which first entered parliament in 2010, has seen its ratings plummet mainly due to the allegations of corruption against its de facto leader Vít Bárta.

‘The government...is now trying to solve the problem with the mantra: the fewer problems we resolve, the more we need to speak about them’

“Within this strategy, I personally consider a task to have been fulfilled when it is a reality, endorsed by the government, the Chamber of Deputies and the Senate and signed by the president. There are currently around 10 of such tasks that have been fulfilled,” Peake said.

She described the new law making commercial entities criminally responsible as a “breakthrough,” and stressed the significance of longer prison terms for civil servants and public employees found guilty of corruption (from the previous one-to-five years, to two-to-eight years).

“What can we want from a government in which the deputy prime minister for the fight against corruption [Peake] is under the command of Vít Bárta ... whom the police have accused of corruption, and who will have to explain his actions in court,” he said at a ČSSD press conference convened later on Tuesday specifically to challenge the government’s anti-corruption performance.

“I think it’s clear that this government has failed in its fight against corruption and is now trying to solve the problem with the  mantra ‘the fewer problems we resolve, the more we need to speak about them’ and tells the public exactly the opposite [of what the reality is],” Tejc said.

As well as reeling off the list of high-profile corruption scandals that have compromised the government, Tejc singled out the Law on Public Procurement as being “entirely inadequate.” He said the Social Democrats in the Senate, where the party has a majority, returned the draft law to the lower house of Parliament with a proposal to introduce measures to oblige bidders to reveal the identities of the persons who ultimately own companies and their subcontractors participating in public tenders, but the coalition parties rejected such measures.

Further, Tejc said that the coalition government, and VV in particular, has not acted upon its pledge to ban bearer stock, through which company owners can remain anonymous, and rejected the ČSSD’s proposed legislation to regulate lobbying. The shadow interior minister also called for the reinstitution of the financial police unit disbanded by former interior minister Ivan Langer (ODS).

‘It wouldn’t be totally fair to say that there are no results, but the government is attempting to tackle many things at the same time’ The head of Transparency International in the Czech Republic, David Ondračka, says that while the current government has initiated efforts to combat corruption, it has easily succumbed to pressure.

“It wouldn’t be totally fair to say that there are no results, but the government is attempting to tackle many things at the same time instead of setting fundamental priorities. The government uses strong words, but when some resistance emerges or some lobby comes along, it gives in easily,” Ondračka told the server ParlamentniListy.cz

Ondračka says the government needs to aim to depoliticize the public sector and state administration, and should proceed with three basic areas of reforms: reform of the judicial system and state prosecution service, control of state-owned enterprises, and a law on state employees.

In 2011, the Czech Republic ranked 57th in Transparency International’s Corruption Perception Index, down from 52nd in 2010.