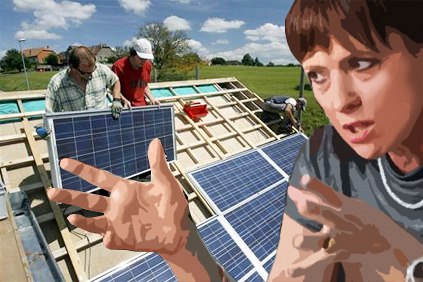 ERÚ chairwoman Alena Vitásková says a ban on new renewables support from 2014 could save the Czech Republic Kč 196 billion compared to waiting to take the step in 2020 foto: © Reuters, Czech Position, Česká pozice

The Czech energy regulator is seeking new legislation to stop all renewable energy support from 2014, warning that the current system needs to be braked if Czech business and consumers are not to be overloaded with tens of billions of crowns in higher electricity charges.

Energy Regulatory Office (ERÚ) chairwoman Alena Vitásková compared the current Czech renewable support legislation to a runaway train with defective brakes that had already gone off the rails one time in the solar boom which culminated in 2010.

“It must be stopped in time so that this does not happen a second time. If not, there will be a severe impact on the national economy of the Czech Republic,” she said.

Vitásková told a news conference on Wednesday that the Czech Republic should already fulfill its pledge to the European Union to produce 13.5 percent of its overall electricity needs from renewable by 2013 with the figure at 10.55 percent as of the end of last year. The deadline to meet the target is 2020. That, she added, would leave the way open for the country to scrap all support for new renewable power from 2014 onwards.

The ERÚ boss said a ban on new renewables support from 2014 could save the country Kč 196 billion compared to waiting to take the step in 2020, or up to Kč  617.3 billion if the step was delayed and stalled new rules widening the scope of renewables support is passed. Vitásková said her office has taken steps to prepare a new law on renewable support and also a rushed amendment ready to be pushed through quickly if the new measure offering more generous renewable support becomes law.

‘Biomethane could be worse in the long term than solar power.’

The new law on renewable energy was blocked by Czech head of state Václav Klaus, an outspoken opponent of state support for renewable energy and anything that might distort the normal workings of the market. But his veto can be overturned by the Czech lower house of parliament.

Vitásková sees the main danger from the new law in the generous incentives for biomethane, a gas that can be collected and processed on farms from animal waste. This could end up costing the Czech electricity consumers even more than the solar boom sparked by generous incentives that have made the country the world’s fourth biggest solar power state, based on installed capacity, ahead of the US and China, she warned.

“Biomethane could be worse in the long term than solar power,” Vitásková said. “Solar power can be limited to some extent if the [electricity] distribution network cannot cope with it. But that is not the gas with gas. There is plenty of capacity on the network,” she said.

Vitásková’s headline pledge to ban all new renewable support from 2014 might have a few exceptions. She said that a new sophisticated framework for support could be drawn up for some renewable after that date and that an expert commission might be called on to work out what types of renewable might qualify for limited state support. The main drift of her message — although it will be the Ministry of Industry and Trade (MPO) that will have to draw up the final legislation — still stands.

To judge from his recent comments, Czech Minister of Industry and Trade Martin Kuba (Civic Democrat, ODS) is already on the same wavelength as ERÚ’s Vitásková when it comes to curbing renewables and the EU impact on Czech energy legislation.

‘The energy regulator is in favor of gas and coal and wants to wipe out renewables.’

Even with new renewable support cut to almost nothing from 2014, the Czech state will continue paying for decades to come as a result of guarantees given to renewable power investors in the past. The main framework legislation from 2005 only allows limited adjustments to past support levels with the bill for renewable support this year expected to add up to Kč 38.4 billion, around two-thirds of that support will go to solar power although it produces only around an eighth of total renewable power in the country. Support for renewables averaged out at around 11 percent of Czech electricity bills last year.

Jan Rovenský, the energy expert of environmental pressure group Greenpeace’s  Czech branch, denounced the whole direction of  ERÚ policy. “The energy regulator is in favor of gas and coal and wants to wipe out renewables,” he told Czech Position.

Rovenský said the costs of support for renewables should be compared to the much highest Kč 118 billion a year costs from pollution and damages to health of Czechs, mainly in the north of the Czech Republic, from production of power from brown coal. The figure comes from an estimate of the so-called externalities of using brown coal power plants to meet most of the Czech Republic’s electricity consumption needs, still around 60 percent, produced by Prague’s Charles University. “What I am looking for here is an even playing field,” said Rovenský. “I am not seeing any signs of that from the energy regulation office”