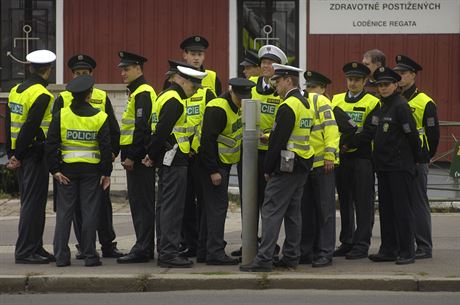 Czech Police have given details of how current and former police officers are believed to have headed a terror and extortion racket in the country’s second city, Brno, that continued operating for 12 years .

Three former police officers, one serving officer and two civilians, have been held in custody since members of the suspected gang were detained on Tuesday following an undercover investigation by a special police squad for combating organized crime (ÚOOZ), the Police Inspectorate, and Public Prosecutor’s Office in Olomouc.

“This was a very serious failure by Czech Police,” said Chief of Police Petr Lessy at a joint news conference called to give details of the latest police scandal which has filled the Czech papers in the last days with speculation about its amplitude.

‘It is positive that the investigative actions of the Czech Police themselves were able to uncover this case.’

“On the other side of things, it is positive that the investigative actions of the Czech Police themselves were able to uncover this case,” Lessy said.

The gang, which started operations in 1998 and continued until 2010, pinpointed businessmen who could be blackmailed, sometimes with promises that corruption and other proceedings they faced would be swept under the carpet, according to details revealed during the news conference.

The two civilians gang members detained provided the “muscle.” Threats of violence, including murder, and actual violence was used to collect sums ranging from tens of thousands to tens of millions of crowns, according to a police statement issued after the press conference.

One member of the gang, rumored to be its ring leader, was a former policeman turned businessman, Michal Tofl. He was shot to death outside his house in a Brno suburb by a machine gun touting attacker in the summer of 2010. Police have still to clear up the circumstances of the attack and find the killer.

Lessy, flanked by the head of the ÚOOZ, Robert Šlechta, Olomouc supreme attorney Petr Šereda and Director of the South Moravian Police, Tomáš Kužel, admitted during the news conference that investigations will center on why it took so long for the well-organized police gang to be uncovered.

“The oversight mechanisms within the Ministry of Interior failed,” Lessy said. However, he added that while it was clear that individuals had failed — and there are suspicions that evidence and investigations pointing to the gang might have been deliberately shelved — it was too early to talk about a systematic failure of police oversight. “That will be the focus of further investigation for which we will need all the information available,” the national police chief said.

‘We know that the octopus could be a lot bigger and affected a lot more people.’

ÚOOZ head Šlechta suggested that the scandal could widen well beyond the 17 specific criminal cases so far documented, now that the investigation has been made public and questioning of suspects started. “We know that the ‘octopus’ could be a lot bigger and affected a lot more people,” he added. Šlechta made a public appeal for any Czechs who had previously kept quiet out of fear to now come forward with more evidence about the so-called Brno gang.

During the news conference, the ÚOOZ boss revealed that the investigation was shifted out of Brno to the capital, Prague, soon after it started because of the impression that officers were being stonewalled in Brno amid an atmosphere of distrust and fear in the regional police division.

Czech media have speculated that sections of public administration, the judicial system and politicians could eventually be implicated in one of the biggest public scandals for years. The high-powered podium at Friday’s news conference were keen, however, to smother, or at least not fuel, such speculation. “I cannot comment on the way that the investigation will proceed and the direction it will take in the future,” said state attorney Šereda.

“This was an exceptionally serious case. But we believe that it proves that the police and justice system can solve such cases. It is a signal that citizens can have trust in their institutions,” he said. South Moravia’s police chief said the failures were “of individual officers” not of the force.

Police said they were put on the tracks of the Brno police gang by a murder investigation in the central region of Vysočina two years ago.

The six detained in custody face charges ranging from abuse of public office, blackmail, receiving bribes and membership of an organized gang which sought to abuse those holding public functions. Maximum penalties could be up to 12 years in jail.