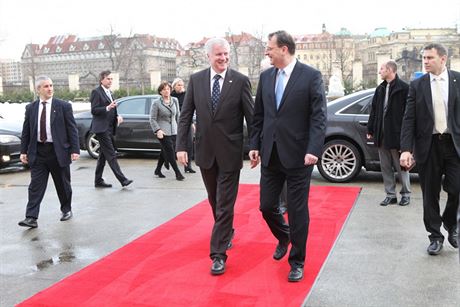 Czech Prime Minister Petr Nečas (Civic Democrat, ODS) seems to have gone over the top in seeking to maintain excellent relations with neighbor Germany in the field of energy policy.

Hard on the heels of offering German Chancellor Angela Merkel a chance for her country to take part in a public debate about the expansion of the Temelín nuclear power plant, on Wednesday night Nečas hosted the minister-president of Bavaria, Horst Seehofer, and gave him assurances about the possibility of the Czech Republic blocking volatile flows of Germany electricity.

“The Czech Republic, according to Prime Minister Petr Nečas, is planning massive investments of more than €2 billion into its transmission network,” the government press service reported after the talks. “The investment will help neighboring countries, including Bavaria. The Czech Republic is pushing ahead with a different path from other countries which are preparing to install on their borders so-called blocking devices, to protect their national electricity systems against surges of renewable power.”

The problem is that the danger from turbulent German renewable power stems from wind farms in the north of the country and which must transit through Poland and the Czech Republic to get to customers in southern Germany and Austria because inadequacies on the German national grid are still very much alive and will not be solved in time by Czech, or for that matter German, grid investments.

ČEPS says there is a real danger of black outs within four years because of such surges. The state-controlled grid operator ČEPS told Czech Position on Thursday that it will have to go ahead and seek permission to install the equipment, so-called phase-shifting transformers (PSTs), which regulate rather than block power flows, on Czech borders if Poland leads the way with such a step.

Poland, which has a more fragile electricity grid than the Czech network, is currently considering such a step with its network operator already being cleared to go ahead with the far-reaching move if last minute talks with Germany bring no results, sources told Czech Position.

PM Nečas’ comments about regulating volatile German electricity flows have some truth as regards the border between the Czech Republic and Bavaria, where the installation of such flow diverting devices is not planned. But this is a bit disingenuous given that Germany’s biggest and most important state is not the source of the disruptive power flows, just one of the main consumers of the power produced in the north of the country.