Czechs still on the fence over proposed loan to help save the eurozone; PM Petr Nečas’ comments seem unencouraging for its backers 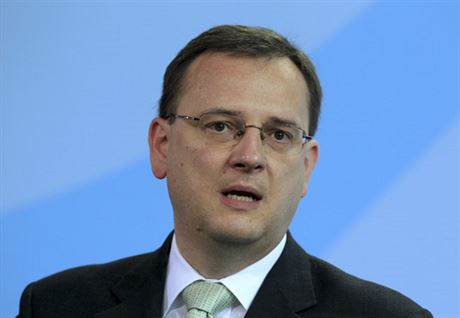 Czech Prime Minister Petr Nečas (Civic Democrat, ODS) declared on Tuesday that his center-right government would not take a precipitous decision over whether to take part in a Kč 89 billion loan to help save the endangered eurozone.

In a specially convened press conference, Nečas said that not all the conditions surrounding the loan and an intergovernmental pact on fiscal discipline agreed at last week’s meeting of government leaders in Brussels were yet available and so a responsible decision could not be taken.

“At this moment, there is just a piece of blank paper,” Nečas said of the fiscal agreement, adding that the details of how the loan via the International Monetary Fund (IMF) would work in practice — and the rights and responsibilities attached to it — were still blurred. “We will decide when all the facts are on the table,” he added.

Initial responses to the question of whether the Czech Republic should sign up to the loan already show signs of splitting the fragile three-way coalition government (ODS–TOP 09–VV).

‘At this moment there is just a piece of blank paper.’

Foreign Minister Karel Schwarzenberg, chairman of the second-biggest coalition party, TOP 09, has already come out and said Czechs should contribute or risk being detached from the mainstream of Europe. Leaders of the smallest coalition party, Public Affairs (VV), have come out against what party chairman Radek John described as “writing a blank cheque.” The ODS has traditionally had a strong euroskeptic leaning, partly a legacy of its cofounder and former long time leader, President Václav Klaus.

While Nečas left the door open to eventual Czech participation in the overall €200 billion loan, nearly all his comments on Tuesday appeared to be aimed at pushing it closed. He underlined that the government — and not the Czech National Bank (ČNB), whose reserves would be raided for the loan — will make the final decision after taking the bank board’s recommendations into consideration.

ČNB governor Miroslav Singer already on Monday declared his skepticism about the latest plans to save the eurozone, adding that the overall loan would probably not even be enough to have the desired effect. He also cast doubt about the advisability of parting with around 10 percent of the central bank’s reserves.

Nečas added that it was not even clear at the moment if the Czech Republic, as one of the few possible non-eurozone contributors to the loan, would even be able to draw on it if needed, with early evidence suggesting that would not be the case. “The first, preliminary analysis shows that there will be different [drawing] conditions] for eurozone and non-eurozone members,” Nečas commented, adding that the loan appeared very much like a disadvantageous deal for the latter countries that signed up for it.

Nečas said that the economic and currency implications of what he described as “a very serious and a very complicated and expert situation” were uppermost for him, though he added that “there are foreign policy implications as well.”

The Czech prime minister, who stated before last week’s Brussels summit that he could not imagine the country being isolated on its own, added that he did not believe that the Czech Republic would find itself isolated alongside Britain, which already rejected the proposed new fiscal discipline agreement between EU countries thrashed out at the summit, as a result of the loan decision.

“I do not fear for that at all,” Nečas said, adding that Sweden found itself in a similar situation to the Czech Republic. Czech eventual participation in the inter-governmental discipline deal is still unclear, though Nečas pointed out on Tuesday that the measure was going in the same direction as desired by the coalition in any case.

Nečas’ non-committal stand was immediately attacked by the main opposition, the center-left Social Democrats (ČSSD). “This is a very big disappointment,” party leader Bohuslav Sobotka said. “This is a strategic decision about whether we will be in the core of Europe,” he added, saying that the issue should be the subject of a wider discussion.

‘The result will be our marginalization in the European debate.’

The ČSSD chairman said that the loan should be seen in the perspective of the Kč 163 billion that the Czech Republic had already drawn from EU funds since its membership in 2004, with money also on the way in future years. Sobotka added that loans had previously been made to the IMF without any negative consequences.

“We are part of the problem [of the eurozone]. If the eurozone fails then there will be a negative affect on our employment and on our economic growth and our citizens’ chances of a decent life,” he added.

ČSSD shadow foreign minister Lubomír Zaorálek characterized PM Nečas’ stance as “sitting on the fence until he sees which way the battle will turn out.” “The result will be our marginalization in the European debate,” he added.