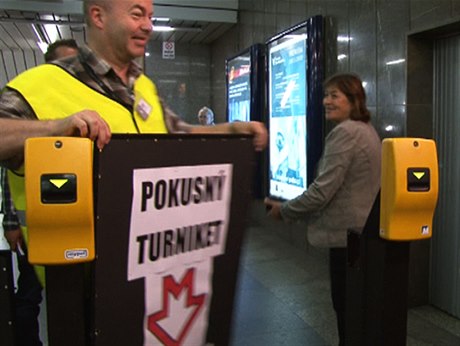 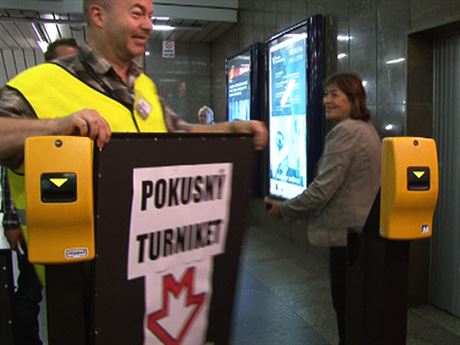 The Czech Pirate Party (ČPS) held a demonstration on Tuesday against the planned installation of ticket barriers in the Prague metro. Party activists dressed in reflective jackets blocked the way to the platform at the I.P. Pavlova station, one of the Prague metro’s busiest, with boards labeled “ticket barrier trial” and distributed leaflets with information about Prague Transportation Company’s (DPHMP) plans.

“Combined with Opencard, the ticket barriers will raise the level of surveillance in Prague several levels higher. Apart from  monitoring the number of passengers, the barriers will make it possible to follow specific individuals, map their habits, and combined with the camera system it will be possible to link the database of details of Opencard holders with a database of the faces of passengers,” ČPS chairman Ivan Bartoš told Czech Position.

In his view, the Prague authorities are turning the clock back: “The current leadership of the city gives the impression that its idols are the enforcers of normalization,” Bartoš said, referring to the period when freedoms were drastically curtailed following the Soviet-led invasion of Czechoslovakia in 1968.‘Combined with the camera system it will be possible to link the database of details of Opencard holders with a database of the faces of passengers’

“The increase in surveillance, megalomaniac transport projects, the clampdown on ‘problem individuals,’ and the national front rule of the Civic Democrats (ODS) and Social Democrats (ČSSD) in the city administration are evidence of this,” he added

The end of 2010, the center-right ODS and center-left ČSSD formed a controversial coalition in the Prague assembly, which sparked a wave of protest. Instead of considering how to provide better services to improve the lives of Prague’s inhabitants, Bartoš says the city’s councilors’ main concern is implementing projects involving large amounts of money.

The ČPS claims the ticket barrier project will involve yet another scheme to embezzle public funds. The DPHMP commissioned a study from the audit firm Deloitte which estimates the cost of introducing the barriers at Kč 1.49 billion, but the Pirate Party claims that this counts only the cost of installing the barriers and amounts to a gross underestimation of the real cost.

The DPHMP plans to borrow a similar amount for the project. “The rate of interest [on the loan] should be around 4 to 5 percent, depending on the collateral the city administration provides,” Deloitte consultant, Lukáš Filip, says. Thus the loan would cost the transport company a further Kč 428 million, then there would be operating costs which Deloitte estimates at around Kč 420 million, pushing the overall cost up to Kč 2.3 billion.

“After full operation is launched we estimate that annual running costs will amount to only around Kč 100 million,” says DPHMP director, Martin Dvořák, told Czech Position.

Implementation of the ticket barrier project could begin in 2013 and according to Dvořák, should be launched into full operation two years later. Dvořák says the barriers will significantly raise ticket sales, and also reduce the number of homeless people and “problematic persons” in the metro.

The DPHMP first projected the installation of barriers several years ago and at the time estimated the cost at Kč 3.5 billion.

Prague doesn’t have the money

Back in 2008, reports emerged in the press that so-called “black passengers,” people who don’t buy tickets, cost the transport The Pirate Party claims that it will be easy to get around the barrier system if there will be no inspectors present.company Kč 1.82 billion a year, while in 2007 inspectors estimated some 70 million journeys were made without payment. “If everyone who made those 70 million journeys bought a ticket for Kč 26, the transportation company would have gained Kč 1.8 billion,” Dvořák said at the time.

According to this logic, however, from the 1.2 billion passengers it transports annually the DPHMP would make Kč 31.2 billion annually, whereas in 2007 the actual turnover of the company was Kč 3.8 billion.

The Pirate Party claims that it will be easy to get around the barrier system if there are no inspectors present. “For example, dishonorable passengers will be able to use reduced-rate tickets, use their grandmothers’ Opencard, pass through quickly behind other passengers, share SMS tickets, share travel passes with friends and so on,” Bartoš says, adding that manning the barriers with inspectors would drastically increase running costs.

The center-right TOP 09 party agrees with the Pirate Party on a number of points and doubts both the reasoning behind the project and the financial forecasts. “Further wasting of money on such doubtful projects with dubious assignments is an economic risk for which Prague doesn’t have money,” Prague assembly member Tomáš Hudeček (TOP 09) said about the project.

As the majority owner of the DPHMP, it is the Prague city administration that will have the final word on the project and a decision does not appear to be imminent. “The issue of the ticket barriers is not even on the table,” Prague Mayor Bohuslav Svoboda, told the daily Hospodářské noviny on Tuesday.