Czech pension funds, which should help ensure a carefree old age, are in fact among the world’s most expensive 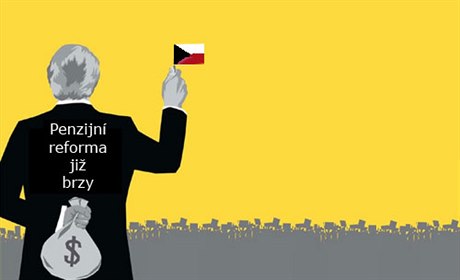 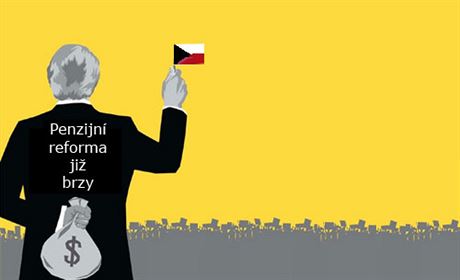 Minister of Labor and Social Affairs Jaromír Drábek (TOP 09) says the Czech parliament looks should approve the government’s pension reform proposal this coming autumn. A major change would be a voluntary opt-out from the current pay-as-you-go pension system, which will allow people to allocate some of the money they now must pay to the state to private pension funds instead.

Obviously, we won’t put all our eggs into one basket. We’ll take a few good eggs and put them in among the rotten ones. Unfortunately, those putrid eggs are Czech pension funds.

It could have been a bigger catastrophe. The change in the pension system that the government of Petr Nečas (Civic Democrats, ODS) wants to push through will not move half, but only one-third of employee social insurance contributions to private funds. And it won’t be mandatory, but voluntary (thanks to a strong media campaign). It will be a voluntary trap — you can walk into it of your own accord, but you won’t be able to voluntarily walk back out.

It could have been a bigger catastrophe, but we could also breathe a similar sigh of relief when a tram only runs over one of our legs. And this is even before we calculate the increased value-added tax (VAT), which has more to do with the terrible state of the budget than with pensions.

The performance of Czech pension funds, which should be the basis for our carefree old age, is exemplary — in 10 years, they have earned their savers an average of 0.3 percent per annum. It is hard to find a better (more penurious) deal anywhere. But Drábek now counts on funds growing annually by 1 percent, and he identifies this as the main advantage compared to the continuous funding of pensions. It could have been a bigger catastrophe ... but Drábek must be on guard to ensure that nothing happens to the funds.

That is until someone tells him how it really is, and despite the fact that he will want the saved resources to increase by 20 percent to 30 percent, he will need retirees who won’t wait 30 years but 100 years for the promised yield. How many of them have such patience?

And that’s without even mentioning that, for the entire duration, Drábek must be on guard to ensure that nothing happens to the funds, so that no oil or food shocks, crises, floods or, heaven forbid, international or political developments and similar things occur, which previous generations encountered when they lost their pension funds.

Our inefficient and expensive pension funds are no excuse for the inappropriate legal regulation of their business. In many cases they have already shown that they have things under control. They are the most expensive in the world because in order for them to operate, they consume a sum that is comparable to an allocated state contribution amounting to a maximum of 30 percent of one’s own investment (which is the most among OECD states).  Only then can they maintain themselves on the market with this long-term average real yield of 0.3 percent. And the saver can be soothed by the feeling that he remains “a hair’s breadth” above inflation.

It has been working this way for years, and the funds have not been threatened by any criticism. On the contrary, they have successfully managed to fend off looming competition from employer funds, which are common elsewhere in the world. And now, in line with the advisory committee headed by Vladimír Bezděk for the preparation of the reform, they have managed to ensure that the government has headed unerringly for an alternative that multiplies this business.

The macroeconomic effect of the prepared second (fund-based) pillar is negative, because it reduces the volume of savings in society. It transfers one portion of these savings from a cheap public system to expensive private funds, which receive a larger share for their own wasteful consumption. The government then borrows to plug the gap, which ensures that billions more end up being paid in interest.

Continuous systems have proven their robustness

It is passing the buck to have a requirement under which an insured party who wants to take part of the money and put it into private funds (an opt-out) still has to save by himself. This saving undoubtedly constitutes payments into today’s contributory pension plans. The Bezděk committee’s report states that 70 percent of the active population now already participates in a contributory pension scheme and that they contribute 2 percent of wages on average. One can justifiably expect that one will find opt-out clients among these people. And so we go from zero to zero.

Moreover, it increases the level of risk in the pension system. The argument about the necessary diversification of resources is reminiscent of an investor who buys Greek bonds in addition to his German government bonds so as to diversify his portfolio. The last financial crisis has shown how terrible the losses of future pensioners could be if they bet on the lure of having money work for them and that they will always win in the financial-market casino. The averages losses ran to dozens of percentage points — it would take our pension funds hundreds of years to earn them back.

On the contrary, continuous systems have shown great resilience to the vicissitudes of global finance. Consequently, Prime Minister Nečas’ claim that the alternative to his reform is that “there will not be any pensions” sounds like a warning. Heaven only knows what he heard somewhere and how he interpreted it. Or is there something afoot?

A school trip around Central Europe would suffice

At the same time, the advice one could give the government is easy. All they have to do is put everything to one side for a while, get on a bus and go on a school trip to Bratislava. They can have a sing-along with their colleagues in the evening, and sleep it off the next morning on their way to Budapest. And if the Slovak and Hungarian interpretation is not enough, they can send a representative delegation to Poland.

They can be home by dark the next day, and in those two days away they will have learned enough to ensure that an entire generation of Czechs is spared many sleepless nights. They can listen to why the Slovaks and Hungarians despaired of the World Bank’s celebrated reform project. They can discover that it is ultimately possible to abolish it, but whoever does that will be ashamed to show his face.

And if the Slovak and Hungarian interpretation is not enough, they can send a representative delegation to Poland, where they have also discovered that they don’t have enough for state support that would keep the system afloat.

If anyone argues in favor of the reform using the judgment of the Constitutional Court, they are way off the mark. The constitutional judges who calculated the current method of calculating pensions reacted to an increase in the cap for the payment of a premium from four times to six times the average wage.

If you therefore return to four times the average salary and slightly adjust the so-called second reduction limit, which no longer includes the original tenth of higher incomes, but one-fifth of them, then the requirement of the Constitutional Court can be met quite cheaply.

Reform of the Czech pension system is necessary, but what Minister Drábek and the center-right ruling coalition of the ODS, TOP 09 and Public Affairs (VV) is offering is to preserve the current disadvantages and to add others to them. This includes an unnecessary increase in state indebtedness while the entire system generates pointless losses.

The weakness of the present continuous system is the post-war structure for collecting contributions, which was meant to make life easier for pension clerks who only had a pencil and a primitive counting machine at their disposal. Today, we could easily take the existing hodgepodge  (which includes pension insurance and low-income social assistance as well as disability and widows’ pensions) and divide it up into individual components with the appropriate resources.

Social insurance is intended for people with average incomes. Consequently, the upper limit that is set for contributions should be low. Affluent people don’t need anything of this sort. It is also possible to consider greater merit, perhaps in the form of individual accounts like those the government of Vladimír Špidla (Social Democrats, ČSSD) worked on. Placing an extreme burden on the poorest households by adding a further 3 percent to living costs … represents an asocial phenomenon.

Nonetheless, it is clear that a pillar based on merit must be accompanied by that which is now being clumsily replaced by reduction limits in the calculation of one’s pension. However, this solidarity element (the social pillar) should be financed from taxes, which is something international recommendations have been saying for a long time.

Disability and widows’ pensions (as well as noncontributory periods, i.e the state insured) must be funded from state resources, not just from the contributions of poor employees who practically have to bear the entire burden themselves. That’s why the cost of labor in the Czech Republic is so high.

It is clear that the main resources for such reform are progressive income taxes, property taxes and perhaps also some slight increase in excise duty on alcohol. Placing an extreme burden on the poorest households by adding a further 3 percent to living costs (which is what the plan to increase food prices and have a uniform VAT rate of 20 percent looks like right now) represents an asocial phenomenon whereby the poor show solidarity with the rich. That is a Czech innovation. Certainly, it’s not the first Czech innovation, but there have already been enough of them.