Czech parliament ‘violating’ labor law as it cracks down on others 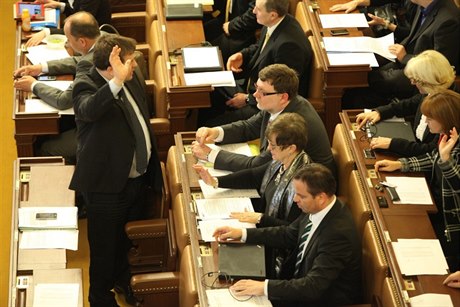 All those in favor of granting Parliament an exemption, say ‘aye’ foto: © janafischerova.cz, Česká pozice 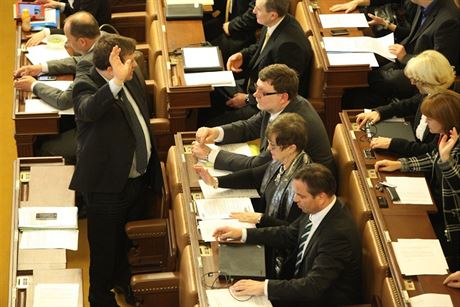 Way back in 1990, Czech building contractor Miroslav Švarc laid off all his employees only to re-hire them immediately on a self-employed basis, as a way of saving himself and his workers piles of money that would otherwise go to paying social and health insurance taxes.

The Czech state long ago made this practice of hiring de facto employees but paying them as if they were doing contract work — dubbed “the Švarc system”— illegal, but tens of thousands of companies and “self-employed” contractors continued to rob the state of tax revenue in this manner with little fear of reprisal.

Hundreds of Czech teachers, for example, are annually “dismissed” during the two-month summer holiday only to be employed again in September, this despite the fact that repeated fixed-term employment is at variance with the Labor Code, as the Education Ministry itself admitted. The Czech parliament approved a tightening of the Labor Code in January that also set out far higher fines for using the ‘Švarc system’

That was all meant to change in January, when the Czech parliament approved a tightening of the Labor Code that also set out far higher fines for engaging in the practice (six years ago, when business was booming, the lower house adopted measures to soften a ban on the Švarc system, allowing, construction firms, for example, to hire a carpenter in back-to-back contracts if he bought and used his own tools).

Now the weekly Týden reports that Czech legislators are violating the very measures they are ostensibly trying to enforce: their assistants in parliament have been found to be working as self-employed consultants, for example, using a trade license (živnostenský list).

Senator Zdeněk Škromach of the center-left Social Democrats (ČSSD), himself a former minister of labor and social affairs, told the weekly that the arrangement had been investigated before and “no violation of the law” was found — but that was before the stricter Labor Code went into effect in January, trade union lawyer Vít Samek noted, adding “now, so-called dependent work can only be done under contract.”

Basically, dependent work is defined as work performed in an employer-employee type of relationship, where the latter is in a subordinate role and uses the work facilities and equipment owned by the employer to carry out the work. Most assistants to Czech lawmakers fit in to that category, and in practice receive paid leave, Týden reported. “When I last when to Ireland for ten days, I got paid just like every other month,” one assistant who wished to remain anonymous said. “It’s the Švarc system with everything.”

Czech lawmakers — being intimately familiar with the laws that they pass — know how to exploit the loopholes. “According to legal analysis of the parliamentary legislation, this is not Švarc system,” said MP Miroslava Němcová (Civic Democrats, ODS), the speaker of the lower house of Parliament (Chamber of Deputies).“The Chamber does not specify the place of work or its contents.”