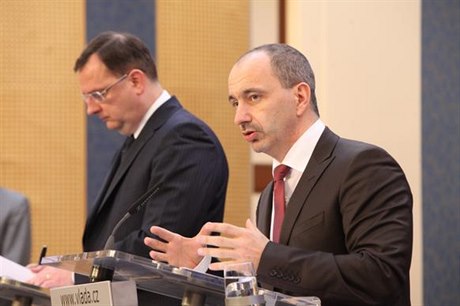 Trade and Industry Minister Martin Kuba (right) spells out the strategy to seek more sales outside the EU; PM Petr Nečas (left) hinted that with EU countries slipping into recession and others on the brink, the move is overdue foto: ©Czech Government Office, Česká pozice 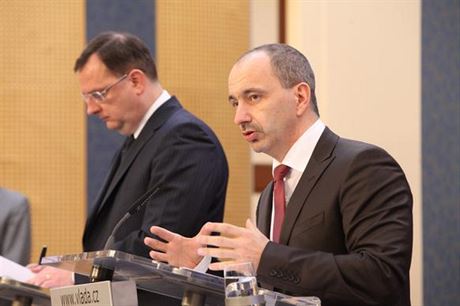 When questioned on Czech Television’s flagship Sunday current affairs program about the aid being offered ČEZ  for the two new nuclear blocs, reported to cost in the region of Kč 200 billion, Kuba said that while no aid was currently being offered he did not rule it out. “Every state reacts differently on this. We must see how things develop,” he said.

The minister added that the main aim was that the near 70-percent state-owned power company finances the expansion of Temelín primarily from its own resources. Asked whether that would mean that the government would have to make do with much smaller dividend payments from ČEZ during and following the construction of the two extra nuclear reactors, Kuba described that as a strategic decision for the whole government and not for his ministry alone.

Prague-based brokerage Wood & Company described Kuba’s comments as “neutral” for the share price of ČEZ, which is listed in Prague and Warsaw, as nothing was yet “set in stone” as regards Temelín. “The comments have been made to deflect public opinion that state funding will be given to the country’s most profitable company,” it added.

‘The comments have been made to deflect public opinion that state funding will be given to the country’s most profitable company.’

The brokerage said the idea of guaranteed prices for nuclear power did appear to have some “traction” within the government but that it was in no apparent rush to decide.

ČEZ has not spelled out in detail how it expects to finance the expansion of Temelín although the power company has pointed out that some sort of state aid is almost automatic for all nuclear new build projects.

Czech Position revealed at the start of the month that ČEZ had selected French-based bank BNP Paribas to be its financial advisor on finding the wherewithal to expand Temelín, including the sounding out of possible partners in the project.

Kuba also said that a further nuclear might be added at ČEZ’s Dukovany site in Moravia after the completion of the new Temelín reactors, bringing the country’s reliance on nuclear-produced electricity to around 50 percent, compared with the current third of power production.

Guaranteed prices for nuclear-generated power together with a minimum price for carbon allowances have been set out by the UK government as a way of encouraging the construction of nuclear power plants in that country, as many existing plants face phase out over the next decade.