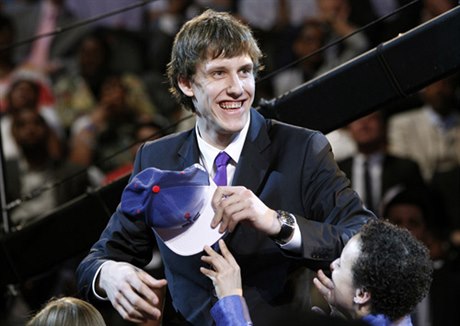 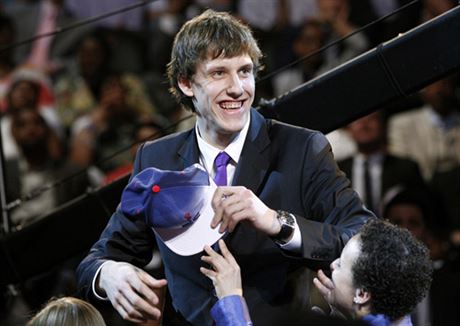 Jan Veselý was drafted by the Washington Wizards with the sixth pick in the 2011 NBA draft, making him one of the five international players taken in the top10. Veselý had worked out last Sunday for Washington, Sacramento and Toronto, which held picks five through seven, and it was the Wizards that opted to team up the lanky small forward with guard John Wall  and center JaVale McGee.

The Czech media have already taken up the cause of the Ostrava-born player, who stands 6 feet 11 inches and led his Serbian team Partizan Belgrade to the Serbian league championship last year. The potential for a high-profile Czech player to achieve greater success than predecessors such as Jiří Zídek and Jiří Welsch could have a major impact on the popularity of basketball in the Czech Republic.

Veselý has already made a splash with both the media and local fans before even stepping on the court with his reaction upon hearing his name called from the podium. Before putting on his new Wizards cap, the smiling Veselý turned to his girlfriend Eva Koďousková and gave her a passionate kiss that led to cheers from the crowd and curiosity as to the identity of this beautiful blond. Koďousková is also a basketball player, at 6 feet 3 inches, and has played for the Czech national team.

“I don’t care if he never scores a point in [Washington] D.C. Jan Veselý making out with his lady after being picked means I’m a fan for life,” wrote Comcast SportsNet’s Michael Jenkins. Another Twitter reaction cited by The Washington Post said “Oh my. I’m more than a little skeptical of Veselý’s game, but if he attracts lady-talent like his draft-kiss-partner to D.C. ... WELCOME JAN!!”