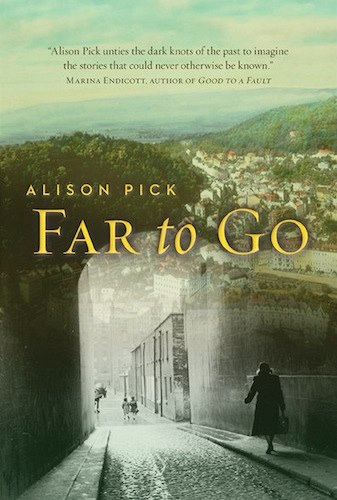 "Far to Go" by Alsion Pick is among the 13 titles on the Booker longlist foto: © House of Anansi Press, Česká pozice

A Canadian author who recently learned of her Jewish heritage and the fact that her grandparents escaped from Czechoslovakia during the Holocaust has had a novel named to the Man Booker longlist. “Far to Go” by Alison Pick tells the story of the Bauer family’s flight to Prague and further attempt to avoid being sent to the concentration camps following the German occupation of Czechoslovakia.

“I didn’t want to be bound by my family’s history, which isn’t as interesting as the Bauer’s,” Pick, 34, told the Toronto Star. “But I was able to grapple with very personal issues related to identity and religion.”

Pick’s grandparents fled Czechoslovakia in 1939 and settled in Canada, where they decided to raise their family as Christians. Her father discovered his Jewish roots during a tour of Prague’s Old Jewish Cemetery after the tour guide commented on the fact that Pick was a Jewish name.

This led him to ask his parents for the truth, and besides carrying out genealogical research writing, “Far to Go” has been the writer’s way of exploring her family’s past. Pick converted to reform Judaism while working on the novel.

Having been on a few short visits to the Czech Republic, Pick relied primarily on extensive reading in order to recreate the setting of Prague and Czechoslovakia at the beginning of the war.

The 2011 Man Booker Prize for Fiction’s longlist was announced on July 26 and included both prestigious and relatively little-known writers among the 13 titles. Four debut novelists are also among the select group.

The winner of the 2004 Booker prize, Alan Hollinghurst, is the early favorite to win again, with bookmakers William Hill giving 5/1 odds on his victory; another well-known name, Julian Barnes, comes second with 6/1 odds. Barnes has made the shortlist three times without ever claiming the prize. Alison Pick is in the middle of the pack with 12/1 odds.

The list does not only contrast new and established writers, but publishing powerhouses and smaller, independent publishers, including a Scottish publisher operating out of his bedroom. Pick’s novel is published by Canada’s House of Anansi Press.

Pick has already won this year’s Canadian Jewish Book Award and the publicity surrounding the £50,000 prize will likely provide a major boost to her literary career. Published in Canada in 2010, her book came out this year in the UK, US, Italy and the Netherlands. “Far to Go” was recently optioned by the Canadian film production company House of Films to be adapted for the big screen. Production is slated to begin in 2012.

The Man Booker Prize judging panel, which is headed by former MI5 chief Dame Stella Rimington, is due to come out with the shortlist on Sept. 6; the winner will be announced on Oct. 18.