Government extends mandate of its Temelín nuclear tender supervisor, Václav Bartuška, so he will witness the start of construction 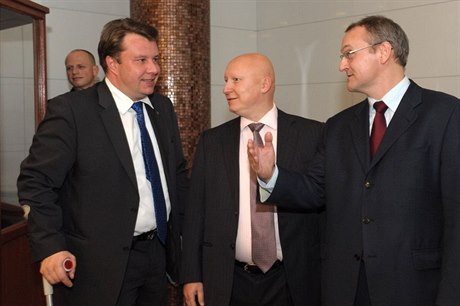 Václav Bartuška (right) with ČEZ CEO Danniel Beneš (center) and the former industry minister at the hand over of tender documents to the three Temelín bidders at the end of October foto: © ČEZ, Česká pozice 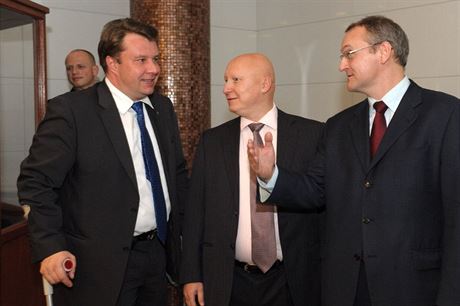 The Czech government agreed on Wednesday to extend the mandate of its appointee to oversee the estimated Kč 200 billion tender for two new nuclear reactors at the Temelín nuclear power plant so that he will be in place for the selection of the contract winner and start of construction of both units.

Václav Bartuška’s current two-year term was due to expire at the end of May, ahead of the July 2 deadline for the three international bidders for the construction contract (Areva, Westinghouse and the consortium of Russia's Atomstrojexport and Škoda JS) to subit offers and the end 2013 target for a tender winner to be announced.

“With a view to the complicated nature of the selection procedure for the suppliers of two new blocks at the Temelín plant it is necessary to extend the initial administrative proceedings until the start of construction of the units has been started,” the government said in a statement following its weekly meeting.

Bartuška’s main task is to look over the shoulder of near 70-percent state-owned electricity company ČEZ and make sure the state’s wider strategic interests are taken into account of, as well as acting as a two-way information flow between the company and government.

The center-right coalition of Prime Minister Petr Nečas (Civic Democrat, ODS) has in the past expressed concerns that ČEZ has insufficiently taken into consideration the aims of its majority shareholder, especially during the replacement of former CEO Martin Roman in mid-September 2011.

One of the main worries for the Czech government over Temelín is how it can reduce the possible damage done to relations with authorities in the countries of disappointed bidders given that either major trans-Atlantic ally, the US; EU main player France; or major East European power, Russia; if the choice goes against their champion nuclear constructor.

Bartuška was originally appointed in mid-2010 by the caretaker government of non-aligned prime minister Jan Fischer.