Czech gov’t has nine lives; Kocourek will also likely land on his feet 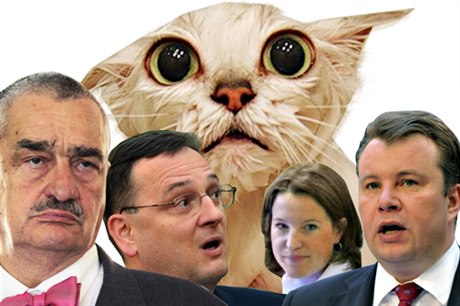 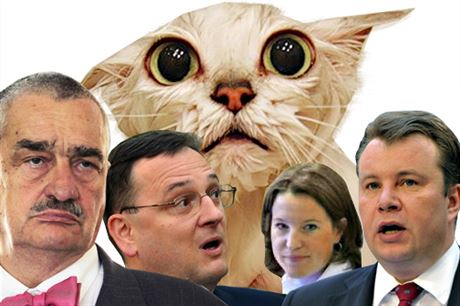 Like a cat, the center-right Czech government somehow manages to survive the nastiest of falls — and, how the mighty have fallen, and so very often, within the three party coalition of Civic Democrats (ODS), Public Affairs (VV) and TOP 09 (the only one thus far not to have a Cabinet minister forced out).

Even this past Sunday night (Nov. 6) — following an exhausting five-day filibuster by the Social Democrats (ČSSD) aimed at delaying passage of the coalition’s austerity package, among other things, which in any case was returned to the left-dominated Senate — Prime Minister Petr Nečas (ODS) said the battle had brought the coalition closer together, even cemented ties. But the cemented ties were soon tested by the dual and lingering plagues of instability within the Cabinet and mistrust within the coalition at large.

Outgoing Industry and Trade Minister Martin Kocourek (ODS), whose surname means “little tomcat” in Czech, is the third Cabinet minister from Nečas’s own party to be pushed from office, in his case over an unethical and in all likelihood illegal transaction in 2008 supposedly to hide Kč 16 million from his wife’s divorce lawyers. At first claiming the money was his mother’s, Kocourek failed to convince the prime minister (or the public) of his explanation for how and why it came to be entrusted to the dodgy brokerage Key Investments, and how he had amassed the small fortune.

After the daily Mláda fronta Dnes broke the news of Kocourek’s mother’s so-called “mystery millions,” ODS leadership gave him 10 days in which to prepare his explanation of the affair. Some of the bolder party members, such as Senate chairman Přemysl Sobotka and current speaker of the lower house of Parliament, Miroslava Němcová spoke openly of the damage the affair was doing to ODS’ reputation, yet took no further action.

When, at Wednesday’s (Nov. 9) press briefing the clearly nervous minister, whose resignation was delivered to Prague Castle on Monday (Nov. 14), admitted that he had “diverted” the Kč 16 million to hide assets from his wife due to divorce proceedings, his fate was sealed; the fact that Key Investments had a hand in the sorted affair was an extra nail or two in the coffin. Yet following his subsequent meeting with Kocourek, the prime minister issued a statement saying, without further explanation, that “on the basis of detailed information” he did not believe corruption was involved though he said “steps taken by the minister in 2008 can be regarded as unfortunate.” Nečas said it was now up to the authorities to investigate the case. And so he is not out of the picture yet.

How to undermine the government

Martin Kocourek is the third ODS minister to leave the Cabinet; ex-Environment Minister Pavel Drobil resigned so over alleged corruption while observers say former Agriculture Minister Ivan Fuksa (ODS) was a victim of an inter-party battle, finding himself a threat to Nečas himself.

Two ministers from the smallest coalition party, Public Affairs (VV), were also pushed to step down: VV founder and paymaster Vít Bárta resigned as transport minister over bribery charges and other allegations while party chairman Radek John was pushed out as interior minister in the political horse trading resulting from the affair. (In this regard, VV deputies Pavel Dobeš and Karolína Peake were subsequently named interior minister and Deputy PM in charge of combating corruption, respectively; the party overall kept its relative position in the Cabinet). From a constitutional perspective, Nečas can recall whomever he pleases from the Cabinet, unilaterally; however, this would lead to the collapse of his own government.

Thus far, the five TOP 09 ministers have escaped the chopping block, but party chairman Karel Schwarzenberg (foreign affairs) and the power behind the throne Miroslav Kalousek (finance) could find themselves in intense discussions with Nečas over Cabinet posts. According to the coalition agreement, the prime minister would need to discuss any calls for dismissal with the TOP 09 leadership, and he’d be unlikely to push anything past the Schwarzenberg-Kalousek duo without them withdrawing the party from the coalition.

From a constitutional perspective, Nečas can recall whomever he pleases from the Cabinet, unilaterally; however, this would lead to the collapse of his own government. The fact is that he can only recall his own ODS ministers with any relative ease (as was the case with Fuksa), though the departures hurts the party’s standing as a whole.

Incidentally, the ODS had wanted to have Martin Kocourek as finance minister — and it remains a thorn in the party’s side that the powerful ministry is in the hands of a junior coalition partner, TOP 09. Scheming to replace Kalousek has long been among the most corrosive of efforts, in terms of undermining trust within the already fragile government.

Nečas is in an unenviable situation when it comes to filling the top posts, and it may become still more complicated for him. With the ProMoPro case unresolved and more recently the selection of an auditing firm for aircraft repair causing ripples, it cannot be ruled out that Defense Minister Alexandr Vondra (ODS) will exit the government. The same is true for Justice Minister Jiří Pospíšil (ODS), whose naming and dismissing of top state and Prague prosecutors has enraged some of the so-called “godfathers” within the party. If Nečas had to replace both these ministers, though, it would be a fiasco, destabilizing his government just when it needs to push through unpopular reforms and austerity measures.

As if Kocourek was not enough of a problem for the Nečas government, last Wednesday even coalition MPs weren’t unified in voting on tax measures (which Schwarzenberg described as suicidal); furthermore, the finance minister had said aspects that had not been agreed by the coalition parties would not be voted on at all (but they were).

TOP 09 were most upset, however, by the fact that together with the main center-left opposition Social Democrats (ČSSD), VV had defiantly broken with the coalition to pass a measure for retaining the tax benefit of meal vouchers, while some members of the ODS and VV also voted with the opposition as regards taxing lottery companies. According to the measure, the companies will decide themselves on how some Kč 3 billion in tax revenue is paid out to charities and good causes. Petr Gazdík of TOP 09/STAN said VV is not a reliable, stable partner while Kalousek was similarly vexed.

To hear TOP 09 deputies speak of the risk of a “grand coalition” of the ODS, ČSSD, VV and the largely unreformed Communists (KSČM) is an indication of the unrest. Nečas, meanwhile, countered that had the TOP 09 ministers not boycotted some government meetings this summer, these differences may have been hammered out already. The head of the ODS deputies’ group, Zbyněk Stanjura, commented it would be a pity now to scrap 99 percent of what the coalition was able to push through over the tiny percentage on which it disagrees, and that mistakes could still be corrected. It was the wisest thing anyone from the three-party coalition had to say on the matter.

Regardless, what is the alternative for the government coalition? Early elections would be a lottery in which the winners would be the KSČM and other radical groups. Perhaps with this in mind, the coalition leaders will cool their tempers this week and iron out or forgive their recent differences. Given the current climate, however, the “rapid changes” that Schwarzenberg has called for would only strain the coalition further. And while it’s unclear how many of its nine lives this government has, in the wake of the Kocourek debacle it needs to tread even more carefully to land on its feet.