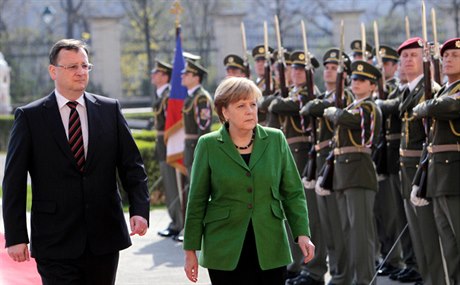 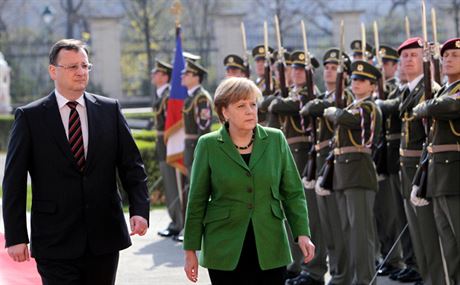 Every meeting of Czech and German leaders is accompanied by statements on both sides that mutual relations are on the best level ever in history. The short meeting between German Chancellor Angela Merkel and Czech Prime Minister Petr Nečas at the beginning of last week was no exception, though their declarations were by no means down to habit and polite formality.

Czech–German relations have developed in a positive direction over the past two decades — in terms of mutual cooperation, mutual communication, resolving bilateral issues, exchanging experiences and opinions, and discussing issues on which the two countries have quite different positions. It’s thus now possible to state that the Agreement on Good Neighborly Relations and Friendly Cooperation signed by both states 20 years ago has been fulfilled down to the last detail.

Hereunder are some specific points to illustrate the assertion:

It’s possible to list many other examples of cooperation and mutual communication, not only in economic areas, but in cultural and other fields. The important fact is that communication is taking place “eye-to-eye,” so to speak, meaning in the spirit of genuine partnership with mutual tolerance and respect.

Although the German economy is the strongest in Europe, Germans are nevertheless fully aware of the need to work together with the other EU states to be competitive on global markets. Merkel likes to compare trading blocks in terms of population sizes. The EU comprises just under 8 percent of the world’s population and Germany alone, 1.2 percent. These figures illustrate that cooperation with EU partners, including comparatively small states such as the Czech Republic, is essential.

Germans believe in the Czech economy

German respondents gave the Czech Republic bad marks for measures taken to fight corruption, transparency of public tenders, efficiency of state apparatus, legal guarantees and political stability.The positive trend in Czech-German relations was confirmed in the recent annual questionnaire conducted by the Czech-German Chamber of Trade and Industry according to which 85 percent of German firms active on the Czech market said they would enter the country again, while only 15 percent said they would opt for another country. The Czech Republic is again rated the most attractive country in the central and Eastern European region for German investment, ahead of Slovakia which was rated number one in the previous two years.

In a poll rating investment attractiveness of all countries for German companies, the Czech Republic ranked second only to Germany and ahead of China and Austria. Currently there are over 10,000 companies registered in the Czech Republic with German owners or with significant ownership stakes in German hands. These companies together employ over 200,000 people in the Czech Republic, or almost 5 percent of the country’s productive population.

It’s important that German investors still have confidence in the Czech economy. Over 80 percent of firms active here consider the current Czech economic situation to be good or satisfactory, and 85 percent said they expect an improvement or unchanging development this year. Only 17 percent said they are concerned about a worsening of the Czech economy. Over 80 percent of German firms operating in the Czech Republic said they plan further investments in the country and the same number said they are counting on maintaining or increasing their current number of employees.

German investors name EU membership, a well-qualified and productive workforce, and quality and easy access to Czech suppliers as key advantages of the Czech economy.

On the other hand, the same respondents gave the Czech Republic bad marks for measures taken to fight corruption, transparency of public tenders, efficiency of state apparatus, legal guarantees and political stability.

Czech-German relations are obviously continuing forward in the right direction to the advantage of both countries. Nevertheless, it’s important that mutual cooperation continues to expand in order to achieve greater mutual benefits and advantages so that when the two countries’ political leaders meet again, they will again be in a position to declare that “current relations between the Czech Republic and German are on the best level in history.”