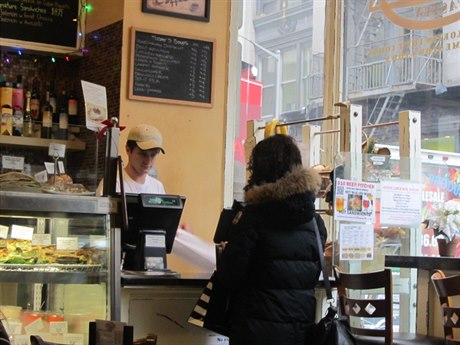 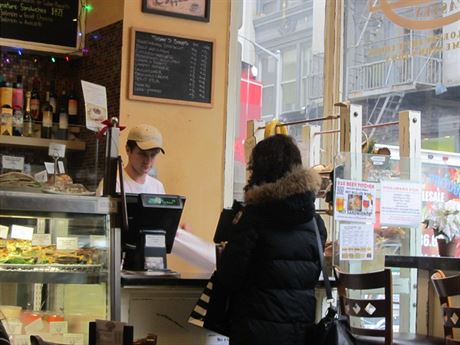 New York is known as a melting pot of cultures, especially when it comes to food. Almost any downtown street has an Indian, Thai, French or Italian eatery. Conspicuous by its absence is Czech food. A quick Internet search pinpointed a few possibilities in Manhattan, but further research eliminated most of them: The menus had a few stray Polish, Slovak or Hungarian offerings, but nothing truly Czech.

Just one eatery made it past the preliminary vetting: Café Prague in the trendy Chelsea neighborhood. The place is rather small, with eight tables for two and some additional seating at the window and by a mirror in the back. It is also quite informal, with no waitstaff. Orders are made at the counter. The eatery is easy to miss, nestled in a narrow space between a much larger hair-care product outlet and an Indian restaurant.

The décor features the expected views of Prague and a balcony — too small for seating — is made up to resemble a Czech living room. “The big poster [of Prague Castle] and the living room get lots of comments from customers,” Rostislav Polomský, the owner of the cafe, told Czech Position. He estimates that 20 to 30 percent of the clientele have some connection to the Czech Republic, either through family or travel. Much of the lunch rush, though, is from workers in nearby shops and offices.

To enhance the ambiance, the background music comes from a Czech radio station, KISS 98, which is streamed over the Internet. Most patrons seemed not to notice the occasional Czech song thrown in among other international hits but the patter from the DJ did draw a momentary puzzled glance in the direction of the speakers.

Polomský agreed that his small café was the lone outpost of old-school pub-style Czech cuisine in Manhattan. “There are two restaurants in Astoria,” he said, referring to a multicultural neighborhood in Queens, one of the outer boroughs of New York City. He also mentioned Hospoda, a very upscale eatery in the recently renovated Bohemian National Hall. The menu there offers a modern fusion of Central European and New World cuisine, and has garnered good reviews. But Polomský volunteered what Czech Position already concluded from reading the menu online: “It’s hard to say it is Czech food.” A six-course meal there will set you back $85. It’s not the sort of place to pop into for a plate of fried cheese with tartar sauce.

To be fair, the Café Prague menu also offers a bit of an eclectic mix of food, with Philly cheese steak and and a Jamaican sandwich standing out as particularly non-Czech. But these are not the main focus.

Ready-made sandwiches in the style of Czech baguettes are big movers during the lunch rush, especially with those getting meals to go. The cafe prides itself on its “special plates,” which include Czech pub standards such as Prague beef goulash, svíčková, fried cheese, sweet or savory crepes (palačinky), and pork or chicken schnitzel.

About 80 percent of the business comes from Czech food, pastries and beer, Polomský said. Prices for most of the special plates are between $8.50 and $10.50, with svíčková topping the list at $12.50.

The biggest hit by far is the goulash ($10.50), which is served either with beans and rice or with dumplings. “At first people were confused by the dumplings. We would serve it and people would ask, ‘Where are the dumplings?’” Polomský said. Customers were expecting something akin to Chinese dim-sum. They thought the Czech-style dumplings were sliced bread. Goulash with beans and rice was introduced to give people an alternative. Now, though, customers have become familiar with Czech dumplings and that version has become the most popular.

When Czech Position was there, one customer — an office worker named Christina on her lunch hour — gave the goulash a try. The spicy aroma generated positive comments from some tourists sitting two tables away. She declared it be “very good,” although she declined to rate its authenticity as she has never been to Prague. Christina said she came to the cafe because she has Slovak heritage. It was her first time there, although she had been intrigued for a long time. “I was just passing by and wanted to give some Czech food a try,” she said, adding that she is also impressed with the breakfast menu.

Czech Position checked out the svíčková. It was a bit different than what you get in a Prague pub. The sauce had a distinctive cheese flavor, and was so thick that one of the slices of marinated beef was completely submerged. Most pubs serve it with a “terč,” or target made of a lemon slice with cranberry sauce and a dollop of whipped cream. Cafe Prague’s version had two large dollops of cranberry sauce, but no lemon or whipped cream.

The changes were not unwelcome. Czech food is often criticized for its blandness, while the cheese sauce had a needed bit of kick to it. The meat itself was more noticeably marinated than its Prague cousins. It was close in flavor to German sauerbraten. The sweetness of the cranberries helped to counter the sourness of the meat, and the thick sauce provided some warmth against the wintry weather. The lack of a lemon slice was no real loss, as few people eat it.

Polomský said the svíčková was based on a family recipe and made by a Czech cook. “Even in Prague from restaurant to restaurant there are variations.” When pressed further, Polomský revealed that although he did live in Prague for some years, he is originally from Znojmo, a small city in South Moravia near the Austrian border. That may account for the regional difference in the recipe.

Wine not a winner

To wash it down, there is a selection of Czech bottled beers — Krušovice, Staropramen and Pilsner Urquell — and along with some upscale brews including Sam Adams and Corona. Pilsner Urquel is also on tap and quite popular. Polomský said that in recent years the reputation for Czech beer has increased dramatically. Midday customers tend to limit consumption to one beer, as most offices now frown on the once popular three-beer or three-Martini lunch of yesteryear.

Czech wine, on the other hand, has not proved to be a big hit. “Now we only serve house wine,” Polomský said. “If someone orders one glass from a [specific] bottle of wine, and then nobody else orders that same type of wine in the next couple of days then the rest of the bottle has to be thrown away.” That kind of waste is not good business. “Czech wine is harder to get [than Czech beer] and it makes no sense to carry it. We are not a fancy restaurant.” He also pointed to limited storage space. “We don’t have a place to keep 100 bottles of wine.”

He does hope to add a few Czech liqueurs like Becherovka to the menu, but right now that depends on the city. Cafe Prague has a license that only permits the sale of beer and wine. The process for getting a more extensive license that permits the sale of spirits takes more time. “And Mayor [Michael] Bloomberg is trying to put a cap on it,” the owner stated.

The city has recently been making an effort to limit the number of new bars in response to noise complaints, drunken driving and late-night violence near night clubs. These issues don’t occur at Café Prague. “We have never had a problem with a drunk,” Polomský said. The early closing hour also helps to account for that. The eatery shuts at 9 p.m., which avoids the more boisterous late-night crowds.

The café has been open for almost two years, and interest in the Czech cuisine has been growing. One stumbling block is the lack of a centralized Czech community in New York. “Czechs are spread all over. It’s not like with the Russians, where there is [an enclave in] Brighton Beach,” Polomský said.

He also pointed out the lack of Czech media in New York. While there are newspapers serving many ethnic groups, including Poles, there is not one for Czechs. He has had to rely on word of mouth and Internet search engines.

Another stumbling block is that Czech food tends to be very heavy at a time when many people are becoming more health conscious. “Czech food is very specific, and not very healthy” Polomský said. But food fads run in cycles. “Even now we are seeing a trend to eating real food … traditional food.” And for those who still count calories, there are salads and soups on the menu.