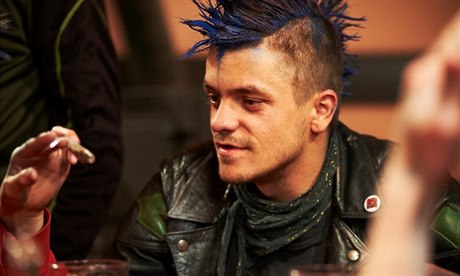 Jiří Mádl masterfully plays the young unemployed punk Jerry, a lost wild child in search of a father figure (with parenthood and spirituality the twin themes of the film) foto: © Negativ, Česká pozice 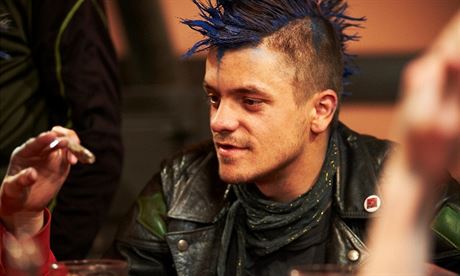 After a well-received premiere in January at the Sundance Film Festival – World Cinema Dramatic Competition – as the first Czech film ever to be screened in this competition, Bohdan Sláma’s film “Four Suns” finally hit local cinemas this week.

Sláma established his place among the best Czech contemporary directors on the strength of three previous features: “The Wild Bees” (Divoké včely), an honest portrayal of the village life where Western influence intertwines with the old life under totality; “Something Like Happiness” (Štěstí) a bittersweet tale about the fragile relationship between three friends and their different dreams set at an old village farm; and “The Country Teacher” (Venkovský učitel), about a gay teacher  who tries to escape his old life in Prague and start anew in a village.

All three films have won praise from Czech critics as well as numerous awards at film festivals worldwide. Audiences have appreciated Sláma’s portrayals of complex characters struggling to find love, their true calling, or come to terms with lives against the backdrop of life in the Czech countryside.

“Four Suns” is in a similar vein, but focuses on the many aspects of the parent-child relationship and spirituality. It centers on a small number of lead characters, a feature familiar in all Sláma’s films.

The cast includes Jára (Jaroslav Plesl), an out-of-luck overgrown teenager in his late thirties, who with his wife, Jana, (Anna Geislerová) is bringing up two children: their daughter, Anička (Anna Bubeníková), and Jára’s son from his first marriage, Véna (first-time actor Marek Šácha).

Véna is an emotional but stubborn 15-year-old, damaged by his parents’ divorce and having been abandoned by his mother. He seeks security and some sort of surrogate family in a group around an unemployed punk named Jerry (Jiří Mádl), whose father died in a car accident and whose mother is an alcoholic.

Jára’s failure to offer parental guidance and free-spirited lifestyle makes it easier for Véna to rebel, skip school and hang out with Jerry, slowly taking the wrong path in life without realizing it. Meanwhile, after Jára loses his job, Anna soon loses patience with his inability to face his responsibilities as an adult and father — and falls into the arms of a lover, Véna’s teacher.

“Four Suns,” however, is not just a film about a family in crisis; spirituality is another major theme, and one that Sláma has not tackled before, mainly through the character Karel (played by Karel Roden, one of the best-known actors), the local guru and sort of village wizard who is searching for a Master. Jára looks up to him for the most part of the story, and when tensions rise between Jára and his wife, he and Karel set out for journey to find the Master resulting in a different take on events for both of them.

Sins of the father

However, the film’s first and most important theme is that of the parent-child relationship and how parents’ mistakes can influence their children, based on some of Sláma’s own experiences.

“The most important thing is to bring children up to a point where they are able to stand on their own and pass what we give them onto their own children. It’s important to keep the equilibrium between setting the boundaries that the children need to feel safe and the great love we show them; to avoid responsibility, to live in a way so that we don’t have to be ashamed of us in front of ourselves or our own children; to realize that once we have children we are here for them, and many of our personal and selfish interests have to go aside,” the director told Czech Position.

This thin line between preferring personal needs and the children’s needs is portrayed perfectly in the film. Plesl and Geislerová deliver convincing performances while giving room for the first-timer Šácha to act out his character’s disgust and confusion of the world around him, supported by Mádl’s multi-layered character Jerry, who alternates between the tough group leader of rebellious punk youngsters and the softer, more innocent and fragile boy when he’s around Jára — the only father figure around he can relate to.

“I don’t think Jerry and I have much in common,” Mádl told Czech Position. “Maybe the unresolved father issue a little bit. The punk visage is interesting mainly because it often contrasts with their nature. They’re pretty much nice boys with tough appearance. I’d say it’s really the other way around with me.”

Another strong theme is spirituality, evolving around Karel, who tries to enlighten everyone around him — but mainly Jára — to feel beyond what the world and our existence offers us first-hand, leaving the audience wondering whether to take him seriously or as a fool and creating comical situations in the film. (The title “Four Suns” is an obscure reference to Karel’s spiritual journey.)

“Spirituality is part of our culture, and we tend to forget about it,” Sláma said. “This concerns everyone, churchgoers and atheists. This results in decline of [the quality of] relationships between people. We forget that we are part of the community and are responsible for having good relationships with people around us and respect ourselves.”

“It was my intention to portray Karel this way, to give the character this ambiguity. But this tension is explained at the end of the film, at least for me,” he told journalists after a press screening. Roden added that he never thought the character Karel was a fool — and so did not approach the role in that way. “He just feels the need to do something, and it doesn’t matter what,” he said.

Despite the film’s great ambitions, promising plot and excellent acting performances, “Four Suns” unfortunately doesn’t reach the levels of “Something Like Happiness” or “The Wild Bees.” The pace is slower, and despite attempts to lighten the film up with comical situations, it leaves more of a bittersweet impression and mixed feelings. But then perhaps this is exactly the feeling the director intended the audience to leave the cinema with.

“There are two scenes that are crucial to me. I won’t name them, but I’ll tell you what [it] means to me,” Mádl said. “[One of them] is when Jára suggests that Jana and him have another child or build a house – something to bring them together as family again. The film shows that it’s not always necessary to build new links for the family to work out; it’s enough to repair the existing ones, which is often a lot harder.”