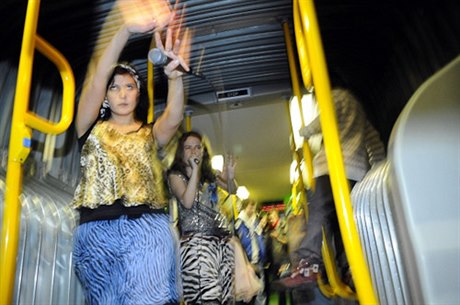 Adéla Elbel (left) and Zuzana Fuksová (right) have performed in some unusual places — including on a bus in their hometown of Brno foto: © ČTK, Česká pozice 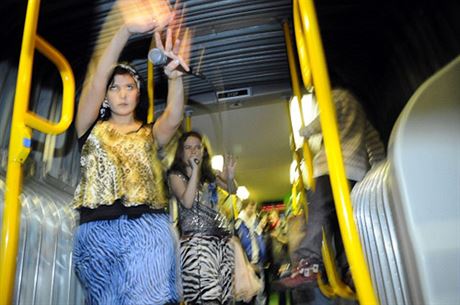 Čokovoko are a rap duo from the Czech Republic’s second-largest city, Brno, who have built up a following around the country, mainly thanks to their earthy female perspective conveyed by means of often hilarious lyrics. Indeed, when they perform live there tends to be a lot more laughing than dancing in the audience.

However, the young women’s less-than-serious approach — including exaggerated dance moves, absurd rhymes, and tendency to giggle in the middle of their own songs — have resulted in their not being embraced by the Czech hip hop community since their foundation in 2006.

“I’d rather not know what they think of us. But I’m sure it wouldn’t be anything very nice,” the group’s Zuzana Fuksová, 28, told Czech Position before a recent show at a small venue in Prague. “We never get invited anywhere.”

Čokovoko (sometimes written Čoko Voko) first came to broader attention in 2008 with the release of their debut LP “Best Of.” The album, free to download from their website, contained slang-filled, pop culture referencing tracks like “Mám ráda” (a list of likes: dad’s bald patch, the lambada, hermelín cheese), “Nemám ráda” (a list of dislikes: pensioners on the tram, albino eyebrows, mould on jam), and “AIDS AIDS dítě” (set to the tune of Vanilla Ice’s Queen-sampling “Ice Ice Baby,” a joke you won’t get without some knowledge of Czech).

Perhaps the standout track on “Best Of” was “Etapy v životě ženy” (“Stages in the Life of a Woman”), a song which has become something of an anthem for the group and was re-recorded at a faster tempo for their second album, this year’s “Hudba” (“Music”). The clever video for the original — made up of clips from the movies “Pink Flamingoes” and “Cry Baby” by the camp US director John Waters — has been viewed over 350,000 times on YouTube.

Fuksová’s bandmate Adéla Elbel, 30, says one reason they started out in the first place was simple dissatisfaction with most contemporary Czech music. “We’re a beer country, so we have beery music. That’s what’s most popular with people here,” she says, offering as an example of the “genre” the chart-topping hard rock band Kabát. “It’s a male thing — those groups are really masculine, with songs about fighting and the like.”

In general, the pair — whose stage outfits include lots of leopard-skin print and even dresses made from the kind of gaudily designed bath towels sold at Vietnamese markets — say Czech men have improved in recent years and can be “survived.” But, they add, their male compatriots could do with devoting more attention to their attire and hairstyles. ‘When the songs mention sexual matters, I think the men in the crowd appreciate it more.’

“My boyfriend thinks that clothes are just against the cold,” Fuksová says, while Elbel chimes in, laughing, that her partner seems to think t-shirts are meant to last for five years. “And more Czech men really ought to wear deodorant — deodorant for all Czech men!” says the latter.

Despite the fact that many of Čokovoko’s songs reflect a distinctly female experience, the audiences at their gigs tend to be split down the middle gender-wise, they say. “When the songs mention sexual matters, I think the men in the crowd appreciate it more,” Fuksová says. “I think, though, that when we get into female themes, like menstruation, they’re not so interested,” Elbel adds.

Not suitable for children

The song “Perioda” (“Period”) on the duo’s most recent record goes “I never asked to be a blood bank,” makes reference to bleeding “half a red lake” and blames everything on the “girl’s gap.” Lines like these, along with the occasional use of strong swear words, are no doubt the reason the band’s site warns that they are not a suitable booking for a children’s party. So what do their own families think of their co-written lyrics?

“My mother really analyses the words. If she likes something she’ll write me a very long email — and if she doesn’t she’ll write a shorter one,” says Fuksová, who is also responsible for the rough drafts of the group’s collage-style LP covers. “But she likes the idea that I could make some money. So in that way she’s proud — in quotation marks.”

The Čokovoko women, who both work in offices by day, probably aren’t raking in cash from tours that take them to all corners of the Czech Republic (they had come to the Prague concert by bus). Indeed, it is not unusual for the duo to do shows in the backwaters of Moravia and Bohemia. “Playing in villages is horrible!” Elbelsays. “Fewer people come, for a start, and they don’t enjoy it as much as they might enjoy, say, Kábat.” Fuksová says, though, that this is sometimes “worse” in big towns.

However, the squares and small clubs of Czech villages are by no means the strangest places they have taken their atypical hip hop show over the years. “We’ve played at an exhibition opening in a toilet, we’ve played at a kind of institution for unruly kids, and even in a library,” Fuksová says.

Getting back to Čokovoko’s recorded output, their sophomore release “Hudba” represented something of a step forward from “Best Of,” largely because it contained more original music and fewer overly familiar samples. Fuksová says the producer of album number two, unlike his laidback predecessor, was “precise” and worked hard to come up with unfamiliar sounds on which to base their tracks. One example of this approach is the song “Monogamie” (“Monogamy”), which samples the 1960s Brno rock band Synkopy 61. ‘Right now I’m in a phase where I’d like to move away from humor a bit.’

As for what the future holds, the young women want to make at least one more album together. Fuksová says she would like to spend more time producing songs than performing live and would welcome some commercial success. “And I think the humor on our previous LPs was a bit superficial. Right now I’m in a phase where I’d like to move away from humor a bit.”

“But that’s what I enjoy the most, the humor. If we moved away from humor, I don’t know what we’d have left,” Elbel says, laughing again.