Czech defense minister in US to discuss Afghanistan, military orders

‘In together, out together,’ Defense Minister Vondra tells US with an eye to NATO training center and US military orders 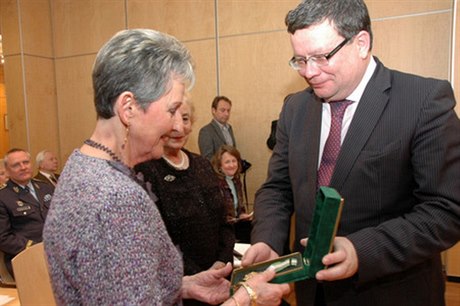 Defense Minister Alexandr Vondra (right) hands over the ‘Cross of Defense of the State,’ bestowed posthumously to the late General Antonín Hasal, to his daughter, Milice foto: Ministery of Defence of the Czech Republic , Česká pozice 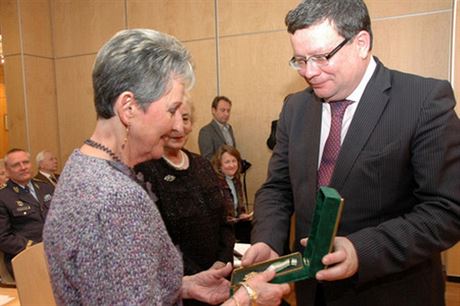 Arriving in Washington for talks with US Secretary of Defense Leon Panetta, Czech Defense Minister Alexandr Vondra (Civic Democrats, ODS), says he intends to propose extending the Czech military mission in Afghanistan by two years to coincide with the planned withdrawal date of American forces. At the same time, Vondra hopes to seal an agreement to open access to US military orders for Czech firms.

“We’re not going to speak about numbers yet. The peak [in troop numbers deployed in Afghanistan] was last year, and this year there are fewer than last year…. I’m counting that our helicopters could go back there this year, while our special forces will finish [their mission]. I think we will definitely continue to concentrate on training: it’s most important because it’s fundamental for Afghanistan to be able to secure itself,” Vondra told journalists from Czech Radio and ČTK news agency upon arrival in the US capital on Monday.

“We’re in America and I always say ‘together in, together out.’ It’s about doing the utmost so that after 2014 Afghanistan is able to govern and provide security with its own forces. Therefore, we’re doing the maximum and concentrating most of our activities on training of [Afghan] security forces,” the defense minister said.

During his visit to Washington, Vondra hopes to gain US backing in a number of areas that would be lucrative for the Czech military, and armaments and high-tech industries. The Czech military, which among other tasks is also training Afghan helicopter pilots, is lobbying for a NATO helicopter pilot-training center to be established in the Czech Republic. Czech Prime Minister Petr N?čas (ODS) raised the issue with President Obama during his visit to Washington last autumn.

Vondra also said he plans to discuss “mutual obtainment of military orders,” to give greater access — and better chances — to Czech firms in military tenders in the US. “This agreement will put Czech firms on the same level as other Western European contractors that can enter army tenders,” he explained, adding that the terms of the agreement are almost finalized. Vondra said the fact that the Czech government had introduced legislation to cut out middlemen from military orders had been instrumental in paving the way for the mutual agreement.

While in Washington, Vondra will also meet with senators Richard Lugar, John McCain (both Republicans) and Carl Levin (Democrat), Congressman Michael Turner (Republican), and members of the National Security Council. He is also due to give a speech to the Atlantic Council think-tank on NATO the Central European approach to transatlantic relations.

At a ceremony at the Czech embassy in Washington on Monday evening, Vondra bestowed the Cross of Defense of the State upon the late General Antonín Hasal (1893–1960). Hasal, a soldier by vocation, served as a commanding officer in the Czechoslovak Legion in Russia in WWI, and during WWII headed Czechoslovak military intelligence in Paris, then chairman of the military office within Edvard Beneš’ government in exile in London.

In 1945–1946 Hasal worked as Czechoslovak minister of transport, before returning to military work in Beneš’ government. In 1948 he emigrated to the US where he worked as an advisor on Central and Eastern Europe to the US government. Hasal’s daughter, Milice Moravcik, collected the award on his behalf.