Czech connection at 24 frames a second

Theatre World Brno is devoted to Peter Brook, but his filmmaker son Simon also has close and longstanding ties to Czech culture 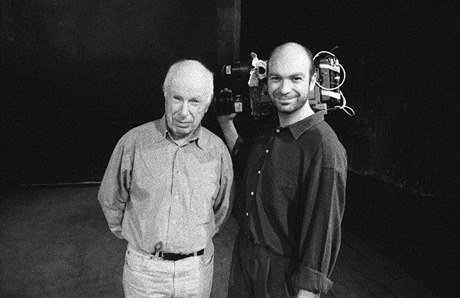 Peter and Simon Brook from the shooting of “Brook by Brook” foto: Česká pozice 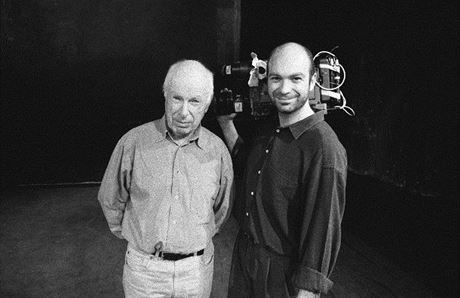 Theatre World Brno runs from May 27 to June 3 and has the theme of “Shakespeare and Cultural Diversity.” In its inaugural edition in 2010, the festival was dedicated to Václav Havel and is continuing the tradition of honoring a figure of contemporary world theater by paying tribute to the work of Sir Peter Brook, a legend of the modern experimental theater.

Shakespeare plays a particularly important role in Brook’s long and varied career. His early productions with the Royal Shakespeare Company include a 1952 “Measure for Measure” with John Gielgud and a 1958 production of “Titus Andronicus” with Laurence Olivier. Film versions of a 1971 “King Lear” starring Paul Scofield and a 2002 TV movie “The Tragedy of Hamlet” will be screened on the festival’s last two nights, while a selection of his other films will have nightly screenings with free admission. On stage, the festival will close with performances of “The Magic Flute” by Brook’s Theatre des Bouffes du Nord.

While the shift from theater to film is a way for the festival to present work from various decades of Brook’s career, that same shift was more definitive in his family, with his son Simon Brook having become a film director. The first film shown at the festival is “Brook by Brook,” a documentary by the son about his father.

Simon Brook’s own artistic path has a special connection to Prague and the Czech Republic, which is surprising since his only two visits to the Czech capital came almost 25 years apart. It started at the beginnings of his film career working as an assistant director on Phillip Kaufman’s 1988 film of Milan Kundera’s “The Unbearable Lightness of Being.”

“I had read the book, then I read the script that Jean-Claude Carriere and Milan Kundera had written, and then we started filming in France and Switzerland.  But living in Paris and New York at the time, it never seemed real,” Brook told Czech Position.

Like many westerners, he couldn’t relate to the characters’ deeper dilemmas and it was hard to conjure up the authentic feelings with the same skill they conjured up a 1960s Prague on location in Lyon. Not that the forebodings of the Iron Curtain were entirely absent.

“Rumors flew everyday about the Russians stealing crew lists, taking photos of us, etc...  It seems absurd in retrospect, but we took it all very seriously, although the book was set nearly twenty years earlier,” Brook said.

Then, with a 10-day hiatus in the shooting, Brook decided to go to Prague and see what it was like for himself. He applied for a visa in advance, giving a girlfriend’s address and claiming he was an engineer. When his fellow crew members wanted to join him their visa applications were rejected, so he set off alone.

“Landing late at night in Prague was quite a shock. Here we were, recreating a twenty year-old Prague in Lyon for the film, and the original was there unchanged except for all the churches behind scaffolding bars and the Soviet flags everywhere.”

Having produced “Amadeus” in Czechoslovakia the producers of “Unbearable” Saul and Paul Zaentz were able to give Brook some contacts, “including a wonderful woman who opened the doors and, more importantly, opened my eyes to the reality of the situation in Czechoslovakia.”

Brook’s return to the Czech domain came in his 2008 documentary “Generation 68,” in which he explored the turbulence of a major cultural moment as it happened in London, Prague, Paris and New York, with appearances from, among others, Václav Havel, Miloš Forman and Dennis Hopper.

For Brook it was important to show the younger generation the real substance of those momentous times, and to make connections that are often overlooked. In the film, for example, Forman points out the irony of the red flag being raised in places like the streets of Paris while in Prague they were “working so hard to bring it down.”

“What has made me very happy is the reactions to ‘Generation 68’ in festivals around the world, when young people come up to me and say: ‘I thought my parents were stupid old idealists, but now I suddenly realize what it is they are talking about, why it is so important to fight for the things you believe in, for freedom of speech, women’s rights, racial equality, etc.”

But the reaction that left the strongest impression came from one of the subjects of the film.

“I did receive a phone call from Miloš Forman telling me that it was the best film he’d seen about 1968, which made me immensely pleased. I was watering my tomatoes when he called, and ended up dancing around the garden like a lunatic. He was probably just being polite, but the result was the same.”