Czech coal will run out in 18 years, industry-funded institute warns 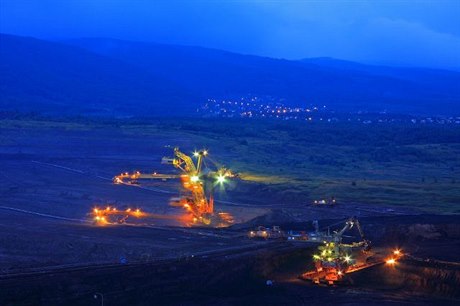 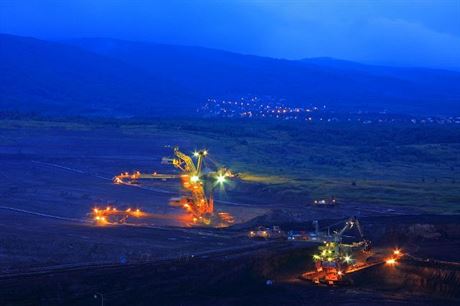 Mining and environmental groups have clashed over the future of coal mining in the Czech Republic after a research body funded by the industry warned that supplies will dry up in 18 years unless the state approves exploitation in formerly restricted areas.

The Brown Coal Research Institute (VÚHU), a private firm owned by domestic coal miners Czech Coal and Severočeské doly (SČD), warned on Monday that only 846 million tons of brown coal are left and will be exhausted within 18 years at the current rates of consumption if government-set limits on mining activities are not lifted.

The same day, a study funded by environmental pressure group Greenpeace warned that mining in new areas would have catastrophic consequences — first and foremost on people’s health.

The VÚHU report is the starkest warning so far about the Czech Republic’s dwindling coal reserves. It is also a clear attempt by the coal lobby to persuade Czech lawmakers to at least partially lift the current mining limits.

The Ministry of Industry and Trade (MPO) is due to spell out its long-term plans for the energy sector by the middle of the year with the problem of coal supplies — especially to the town and city heat and power plants which provide many Czechs with their heating — one of its biggest priorities. Coal-fired power plants also still account for almost 70 percent of the electricity produced in the Czech Republic, although that share has been steadily shrinking.

The commercial institute says that if limits in north Bohemia are extended, a further 850 million tons will be easily exploitable using the mining and transport infrastructure already in place.

“The coal age is reaching its end in Czech history even though in the upcoming years brown coal will remain key for Czech energy,” director of strategy at Severočeské doly Vladimír Budinský told the ČTK news agency. He added that if limits aren’t extended, both of the firm’s two mines in the coal basin will close in around 2035, while Czech Coals’ two mines would be exhausted by 2021 and 2055.

Severočeské doly, owned by state-controlled power company ČEZ, estimates it could easily extract around 100 million tons from areas adjacent to its current mining operations within the current limits. Czech Coal, however, says it could mine around 750 million tons in locations on the periphery of the town of Litvínov, but there is strong opposition to the proposal. If the limits there are expanded according to the miner’s wishes, the villages of Horní Jiřetín and Černice would be the first to disappear from the map.

In further phases, extraction would approach Litvínov and swallow up the industrial district of Záluží, where an oil refinery and chemical works are situated.

According to the VÚHU, there are coal seams containing reserves around five times the volume of coal within the currently valid geographical limits in the rest of the Czech Republic. “Beyond the limit boundaries within the area of the Ore Mountains foothills [i.e. the previously mentioned brown coal basin] there are around 3.8 billion tons of consumable brown coal,” the VÚHU report states. The largest seam is situated between Ustí nad Labem and the town of Žatec.

A further one billion tons lie untouched in the vicinity of Cheb, adjacent to the German border in the northwest. During a survey of coal resources conducted in 1990, the reserves there were classified as “useable.”

Smaller reserves have been surveyed near Liberec, in the Jeseník mountains region and nearby Moravská Třebová. There is also an estimated one billion tons of low quality lignite in Vysočina region in the south to southeast of the Czech Republic.

“Under the current conditions, exploitation of those new locations is simply unrealistic,” Budinský from Severočeské doly told ČTK, referring to their economic viability.

Academics on Monday warned of the catastrophic effects that lifting the mining limits at the country’s two largest open-cast coal mines would have.

‘The burden of these expenses would not be carried by the energy and mining companies, but first and foremost by the citizens of Central Europe.’

A study by Charles University’s Center for Environmental Issues said removing the limits at the Bílina and Československá armáda mines, owned by SČD and Czech Coal, respectively, would lead to external costs amounting to Kč 1.33 trillion. “The expenses stated would arise first and foremost from the effects on human health (increased illnesses, shortened longevity) and the consequences of climate changes, but also include the impact of pollution on agricultural production and damage to buildings,” the center said in a joint statement with Greenpeace.

“The burden of these expenses would not be carried by the energy and mining companies, but first and foremost by the citizens of Central Europe,” the report’s authors added.

The study was commissioned by Greenpeace and the pressure group Kořeny Litvínov, which opposes the expansion of mining limits in the Litínov district. Greenpeace did not participate in the study.

Environmentalists warn that rising prices for coal could make their worst fears of expanded mining a reality.  “If the market price of coal rises significantly, open-cast mines could eventually swallow Chomutov, Jirkov and Litvínov. At present it may not make economic sense to demolish Litvínov, but the same was said when mining was extended to the area around Horní Jiřetín 15 years ago,”  Tereza Otcovská from the pressure group to preserve the current limits and save the village of Horní Jiřetín told ČTK.

The third mining firm with operations in the north Bohemian coal basin, Sokolovská uhelná, is resigned to its limits not being expanded due to statutes to protect the water tables that provide the spa waters for Karlovy Vary. The miner expects to wind up operations in around 2030.

Brown coal mining in what is now the Czech Republic began in the mid-19th century and reached a peak in the 1960s, 1970s and 1980s when over 80 million tons was extracted from open-cast mines annually. Annual brown coal production dropped to a low of around 43 million tons a year in the 1990s, since when it has risen slightly to 46.6 million tons in 2011.

According to the VÚHU, a total of around 5.2 billion tons has been mined from the north Bohemian coal basin. Therefore, with an estimated 5 billion tons still under Czech soil, there is still the potential for a coal renaissance feared by ecologists and many locals in the coal basin.

Approximately 83 percent of coal produced in the Czech Republic annually is used in power stations, the remainder going mostly to municipal heating plants, export and households that use the fuel directly.

Jan Rovenský of Greenpeace Czech Republic said on Monday that at present the Czech Republic exports more electricity annually than could be produced from the supplies that could be extracted each year beyond the current mining limits. “Obtaining energy from apparently cheap brown coal could eventually cost us dear,” Rovenský said referring to the potential human health impact highlighted by the study.

The mining limits were introduced in 1991 in reaction to the wanton environmental damage carried out under the previous communist regime.