According to Czech legend, anyone who samples a Christmas cookie before December 24 is inviting misfortune 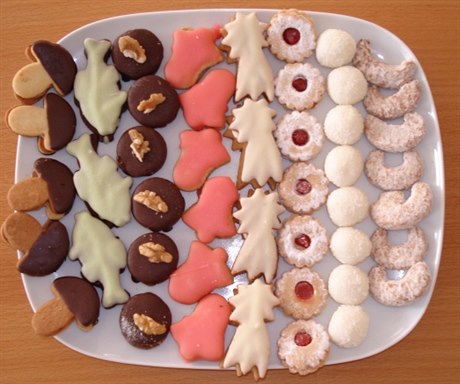 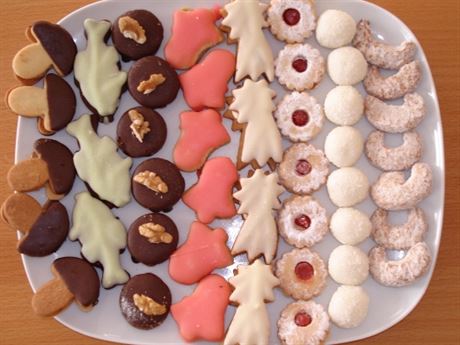 It’s a common scene during advent in the Czech Republic. Dough is made, rolled and cut into shapes or pressed into molds. Walnuts are crushed for filling and melted chocolate is drizzled on top. As one tray is removed from the oven and set out to cool, another is slid into its place.

When done, the sweets are arranged on trays for guests. They are as much a part of the decorations as the tree. Chocolate topped baskets filled with nuts, gingerbread fish and dusted vanilla rolls huddled together, doughy wasp-nests oozing egg-liqueur and crisp jam filled butter cookies are some of the dozen types usually made. All the while, not a single sweet is sampled until the 24th of December (when Czechs traditionally celebrate Christmas) — unless, according to legend, the person wants to bring misfortune upon his or her shoulders.

But how popular is the tradition of baking Christmas sweets, really? An entry on Czech Wikipedia claims that 87 percent of Czechs bake festive biscuits, but the entry provides no support for the figure. Friends, colleagues and family members all attest to baking, so maybe there is some truth in this number.

The major supermarket chains certainly see a marked increase in the sales of flour. Tesco said sales rose by a factor of 30 percent. For Albert, purchases of flour were “roughly seven times greater than during the ordinary times.” Kaufland also reported that the amount of flour sold was many times more than in the rest of the year. It can’t all be going into breading the carp.

The origin for the baking tradition apparently goes back to the pagan winter solstice festivals. Protective and ceremonial foods were prepared for the occasion to shield the house from “dark forces.” Overtime these “magical” foods became the sweets we know today.

Of course, it could be said that if you go back far enough, you’ll find a pagan root for anything. It doesn’t explain the continuing popularity.

Going back a few generations, sweets were not so common among ordinary people. Before the use of sugar beet in nineteenth century, sugar was quite expensive. Vánočka — the traditional Czech Christmas loaf with raisins — was more common in the past than rich biscuits.

The boom period was the first republic. Manuals of this time were “bursting” with many types of sweets and tea cakes. “I think the demand for considerable diversity and quality craftsmanship took root in this time,” Zatloukalová said.

The First Republic period was one of relative prosperity for former Czechoslovakia. Sugar along with vanilla, ginger and other then exotic ingredients were both more available and more affordable. Yet, it was also a period of burgeoning mass production. Why not just buy them?

Family again seems to be the main reason. Jarmila Mandžuková, who wrote Vánoční cukroví z babiččina receptáře (Christmas Sweets from Grandma's Cookbook), connects the importance of baking to the household. “With a home full of the scent of vanilla and spice it wouldn't be a true Christmas, and most of us [Czechs] regard it so,” she said.

The family is also central to how the recipes for the various kinds of biscuit spread to people. “In many families just as in mine a lot of family recipes are handed from generation to generation,” she added.

Hana Holánková a retired school teacher in her seventies is known in her town of Benešov for baking around 30 different types of sweets each year. Her love of baking was evident in the way her face lit up as she recalled the kinds she made. Each description of one type of sweet recalled another and with them came out the molds and cookie cutters which have been with the family for decades.

Holánková said, “I’ve liked [baking] ever since I was a child. It fills the apartment with a beautiful aroma. And my children liked it because it meant Christmas was approaching.”

From her experience, the ingredients in the sweets did appear to change over the time. Dried fruit and honey were more common during her grandmother’s time. As to why people used what they did, Holánková gave one very simple explanation. “People used what they had,” she said.

As popular as the tradition is, more people are outsourcing their Christmas sweets be it from professionals or friends. A number of catering companies confirmed that there had been an increase in demand in recent years.

Filip Uhlíř from Exclusive Sweets was not able to give exact figures but said that sales were in the “hundreds of kilos.” They are mostly for private clients. “In recent years we are always sold out [of Christmas sweets] several weeks before Christmas,” he said.

Yet it might be too early to fret about the future of the tradition. Before Christmas Holánková’s school-aged grand-daughter likes to show her recipes she’s found and asks, “Grandma, could we try this one this year?”