MEP for the Christian Democrats (KDU-ČSL) Zuzana Roithová says she will now start to collect 50,000 signatures required to join the race 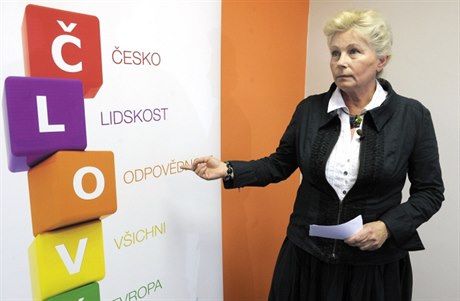 Zuzana Roithová announcing her plan to stand for the presidency and unveiling her campaign message foto: © ČTK, Česká pozice 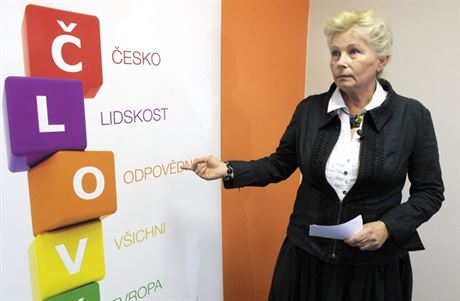 Christian Democrat (KDU-ČSL) MEP Zuzana Roithová announced her intention to stand in the presidential elections scheduled for February 2013 at a press conference in Prague on Thursday. Although the Christian Democrats, who failed to win a single seat in the Czech lower house in the 2010 parliamentary elections, declared they will support her candidacy, Roithová says she will not turn to the party for financial support.

“My main motivation [for deciding to stand] is my concern that in Czech politics the interests of the individual are being lost,” Roithová said.

Fify-nine-year-old Roithová says she wants to be a candidate for everyone and thus will seek contributions for her campaign from private individuals, as opposed to the KDU-ČSL party organization. “But I will not turn down organizational support from individual members. The party has a broad membership base,” she told journalists.

Speaking alongside Roithová at the press conference, Deputy chairman of the Senate — the upper house of the Czech parliament — fellow Christian Democrat Petr Pithart said the party could also seek 10 senators to endorse her candidacy, in which case she would not require the signature of 50,000 citizens.

Party chairman Pavel Bělobrádek said it would support Roithová's candidacy by providing administrative and logistical support. Bělobrádek added that a number of prominent figures from outside politics had already offer her their support in the race.

Roithová has recently rallied opposition to the imprisonment of former Ukrainian prime minister Yulia Tymoshenko in the European Parliament and has also spoken out against the Anti-Counterfeit Trade Agreement (ACTA) recently signed by EU representatives and a most EU states, including the Czech Republic.

Roithová was a senator in the upper house of parliament from 1998 to 2004, elected as an unaffiliated candidate but joining the KDU-ČSL a year later. She served for six months as minister of health in the catetaker government of Josef Tošovský in 1998. Prior to entering politics Roithová, a qualified doctor, was the director of the Vinohrady Teaching Hospital in Prague.

Roithová is the fifth person to announce their intention to run for the presidency, the others being former interim prime minister and current deputy head of the European Bank for Reconstruction and Development (EBRD) Jan Fischer, former prime minister Miloš Zeman  (Party of Civic Rights – Zemanovci, SPOZ), leader of the center-right TOP 09 and Minister of Foreign Affairs Karel Schwarzenberg, and head of the ultra-conservative party Suverenita and close ally of President Václav Klaus, Jana Bobošíková.