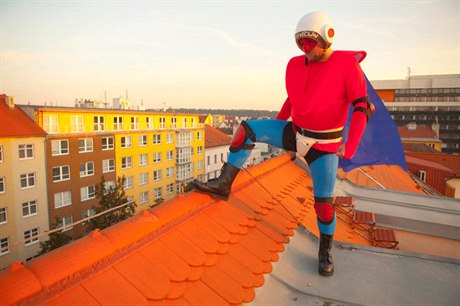 Could a 36-year-old Czech children’s camp organizer be behind the mask? foto: Mafra, Česká pozice 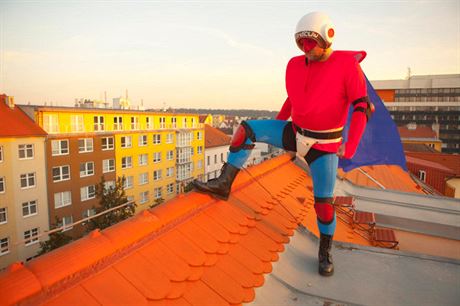 Just a few short weeks since the first videos of SuperVacláv’s unorthodox crime-fighting tactics went viral onYouTube — smearing dog poo on the back of a man who didn’t clean up after his pet and dumping buckets of water on people smoking in prohibited areas — the true identity of the Czech man in the blue tights and red cape may have been revealed.

By day the portly crime-fighter SuperVacláv — who is decidedly unable to leap tall buildings in a single bound, but has (suspiciously) been able to outrun most of the targets of his wrath — helps run children’s camps in Domažlice through the civic association Hanýžka, local media reported Wednesday.

His name is Karel Mařík, according to the news server iDNES.cz, although when contacted by the publication, the man in question vehemently denied being SuperVacláv (editor’s note: it is de rigueur for superheroes to maintain a secret identity; it lends to their mystique). And it appears he’s a faux Phoenix Jones.

Mařík, 36, has also worked as an extra in a number of television advertising campaigns. He played the role of a guardian angel in a popular promotional campaign for TV Prima a couple of years ago and also appeared in a T-Mobile campaign perpared by Saatchi & Saatchi, in which he plays out his dream of staging a game of ‘Člověče, nezlob se’ (Don’t be angry, man) — the Czech version of ludo — with people playing the pieces.

In a behind-the-scenes style video posted on YouTube by “tmobilecz,” Mařík certainly looks and sounds remarkably like SuperVacláv. And the angry victim of the dog poo-smearing incident is Robin Kvapil, a former creative director of Prague-based agency FTM Communications, who studied at JAMU (Janáček Academy of Music and Performing Arts) in Brno and FAMU (Film and TV School of the Academy of Performing Arts) in Prague. “It’s me [in the video] ... But it was not staged,” he told iDNES.cz.

In any case, some in the Czech advertising sector believe it’s only a matter of time before SuperVacláv’s true mission is revealed: not to fight for justice, but most likely to promote some brand. It’s guerilla marketing writ large, with a dash of camp.

Inspired by The Pink Squad?

Observers have noted that SuperVacláv’s modus operandi is also strikingly similar to that of The Pink Squad (Růžoví kukláči) characters in a 2009 ad campaign by the agency Wiktor Leo Burnett for the Slovak insurance company Slovensku objednala Union pojišťovna (“Pojišťovna Union”).

“In the first part of the campaign we created a sort of secret organization that took justice on the roads into its own hands. The Pink Squad was a movement against irresponsibility on the road,” one of the Růžoví kukláči creators said.

“The media were offered a story of a ‘vigialante,’ who in his own specific way punishes irresponsibility on the streets. In the moment when The Pink Squad and their actions became known nationwide, we connected them with Union and its products.”